This series of posts was co-authored by solarise and atomsareenough. Kudos belong to both of our sturdy Golden Bloggers. Here's the final part, where Sonny Dykes answers questions from Cal fans.

In the Q&A session, Coach is really in his comfort zone now, just telling stories like how it is and his vision for things to come for Cal football. 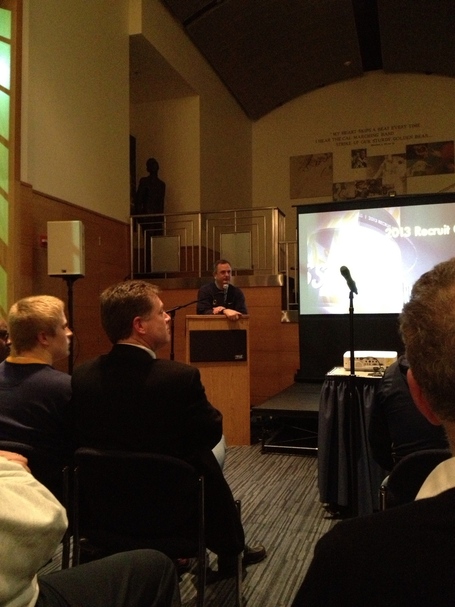 Where is the team at according to Dykes' expectation?

With college coaching, it's all about resources. When he was at Arizona, Cal won every recruiting battle and that's when he started realizing how great of a place this can be. You have academics which is a big strength, the Bay Area, facilities after a lot of work, and a brand that carried weight nationally. The only insignificant complain he has is a lack of field space where you practice. The team right now practices at the stadium but in general, there are just not a whole lot of negatives at Cal. When your complaints come down to field space, which isn't a big deal, there just aren't a lot of negatives. Maybe you can knock Cal on not taking care of its kids academically, but they're fighting to turn that around. They've hired more people, including a learning specialist to help out. Coach Dykes' perspectives is that also you just need to recruit kids who are better students.

It's not about the scheme but about hiring the right person. Coach Buh was someone he admired and shown a lot of success everywhere he went. When he expressed interest Coach Dykes knew he was the right fit for Cal. Dykes says you can win with any style of offense or defense. Example was the Holiday Bowl when Texas Tech caught Cal at the right time and they just didn't want to be there.

In general, when Coach Dykes' spread played against the 3-4, the odd front line-up is off balance and could cause a bit of trouble. Coach Dykes believes at the even front of 4-3 is more versatile for adjustment and cover gaps. In the long term, Cal needs to be physical and stop the run against the top dogs of Oregon and Furd in the Pac-12. It may be hard to recruit DTs for the 4-3 but hey, this class has four. The 3-4 OLBs will convert to DEs in the 4-3. Brennan Scarlett is a natural DE. Besides, in a 3-4, the OLB often lines up over the TE anyway, so that's pretty much the same as a 4-3 DE. As far as the switch is concerned, the players were a little freaked out at first, but they are on board now. Dykes thinks they're in a good spot.

Coach Dykes and Buh's philosophies are similar. Keep it simple. Play with good fundamentals. Play hard and you'll find a lot of success and start winning games. On defense, you need to tackle. On offense, you need to block. Doing things right can be as simple as just lining up correctly before the snap, but it's extremely important. For example, the year prior to Bobby Ross Charger's Super Bowl season, they lost 10 games. Ross hired Texas Tech's D coordinator as consultant to look at their tapes. He came back to Ross and said hey look, you had 800 plays last season and you lined up incorrectly 743 times. No wonder you lost 10 games. The next year Chargers went to the Super Bowl.

Khairi Fortt/Stefan McClure: where are they?

They are doing well, and are recovering ahead of schedule. Fortt looked good in the morning workout that day. As far as injuries/practices go, this is a college program. It's y'all's team. There are no secrets, and opponents will have the tapes anyway, and they'll press the replay button to see what we do. This is y'all's team and you should get to watch your team. There are rules with injuries on what you can tell, but Coach Dykes will tell us what he can tell us without getting sued. He doesn't scout for injuries on opposing teams, and as far as he's concerned, you should always expect that their best players will play against you.

Center's role in the offense?

They make it easy for QBs. Peyton Manning yells a bunch of mumbo jumbo before the snap that he doesn't understand. His scheme is to go fast. Centers won't get beat if they know when they are snapping. The other linemen can hear the center better because they're closer and not up to 5 yards back. The center will ID the front, the blitz of ends, and take care of snap counts/cadences, and worry about his blocking. The signals go to each position group rather than have the QB read them all and then relay them. QBs can now sit behind shotgun and not shout at 5 guys who might not hear him on the road to get line up correctly. He just lets the center know when he's ready and then waits to receive the snap. When we go on the road we don't need silent counts either. Simple.

Not how he does things. Dykes says, if you have 2 QBs, it really means you have zero QBs. You want 1 guy. Coach Dykes tends to go with 1 QB and sticks with him until he proves he's not the guy. Ideally you want one guy to just step up and dominate, but usually that's not what happens. He'll open up QB competition in the spring and hopes that one QB wins the job as soon as possible to get the most reps. Of course this gets him into trouble if no front runner emerges. At La Tech he picked the wrong guy, which happens sometimes, but they figured it out. At Arizona he kinda chose Matt Scott to be the guy and stuck with him. Scott got hurt then Nick Foles came in. Rest is history.

Balance in the Air Raid

That's not exactly how it works. At LA Tech they had almost exactly 50/50 balance though. Running the ball helps with play action. It can demoralize opponents. Throwing all the time puts too much pressure on the QB. What Coach Dykes does is to look at the strength and weaknesses he has in the team, and then he builds the offense based on the strengths of the team to do what it takes to win. They'll run whatever the team does well, and whoever is good will get the ball more. At LA Tech, Coach Dykes had a gifted receiver in Quinton Patton. In one game they called 24 passing plays and Quinton, who was dominating, got the ball 20 times for 200 some yds, while some lesser receiver got the ball 4 times. He got mad and asked why the receiver didn't get the ball all 24 times. That's how his offense works.

Coach Dykes' offense is quick like what Oregon does with tremendous success in the past few years. At Arizona practice they would run 8-10 plays during 30 mins practice period. He runs 50 plays in 30 mins, to maximize the number of reps. You have to learn the basics and not beat yourself to win games. The way to do that is through repetition. Conditioning of the players will be key, but conditioning is done in the offseason, not in season. Practice is about building the skills that you need. Plus, running the plays so many times and so quickly will get them used to being explosive. We will run short bursts and sprints. We run clean football. Players will gradually play themselves into shape through workouts, camps, and practices.

You have to talk to recruits and find out what the deciding factor is for the recruiting for Cal. There are varied approaches. He likes being honest and straightforward with the kid and ultimately let the kid make the best decision for himself, and he feels it's an approach that works for him. He doesn't like pressuring kids. Sometimes he has to be more of a salesman and he doesn't like that as much, but that's just how it is. We work out the positives and negatives for recruits to come to Cal against other programs. We don't badmouth other programs, like some other schools do (coughWashingtoncough) who focus on the negatives of other programs. Nothing against Washington but if that works then maybe those aren't the recruits you want on your team anyways.

Opinion on the guys on the team now

Focus is to get them healthy for Fall Camp, Brendon Bigelow, Daniel Lasco, Richard Rodgers, Chris Harper. Most are not going to be at Spring Camp due to injuries. During spring then you are going to have scout team guys you might not hear from ever again. TX Tech had a similar situation. A kid name Bobby subbed in at RB for spring. By Fall you never heard from Bobby again.

You have to be careful especially with a guy like Bigelow. He's already had three knee surgeries. Obviously he's not going to be able to carry the ball 30 times per game for you. Rodgers is a big guy. 270lbs who can run, catch, do a lot of things. Dykes hasn't really seen too many guys like that. He's "a good guy to throw the ball to".

Ideally you want to to pick two guys and let them draft their teams and battle it out. That wouldn't work though because with injuries and limitations you would wind up with kids like Bobby (meaning, some random kid) playing RB who also needs to block at Guard, or some crazy mismatch where De'Andre Coleman is sacking the QB every time, and that's no fun. So you gotta go in there and divide up the team somewhat evenly. We are going to have 3-4 scrimmages this year including the final Spring Game. First scrimmage should come after 5 practices to see where the team is. But you want to make sure you get through spring in shape and HEALTHY. Depending on how healthy we are, we might have to do some sort of scrimmage with a modified scoring system, even though Dykes is not a fan of that.

What defines a successful season?

It's about establishing a culture. We want 100% effort at practices and games, we want them to be good people off the field. And we want to be competitive every game. We play hard and the wins should start to come. With wins then we will start to believe and that's how the culture gets built. Our players are hungry to get started.

Give it up for our Class of 2013 recruits who will be part of our winning culture at Cal!

Many thanks Atoms my partner in crime for these posts. GO BEARS!