It's always Sonny in California! A look into the Sonny Dykes press conference introducing him as the new head coach at Cal, with video, photos, and full transcript.

Sonny Dykes introduced himself to California Golden Bears fans on Thursday afternoon. For a fanbase that probably needed a bit of convincing that Dykes was the right man for the job, his thorough press conference seemed to address all needs.

Here's the video of the full presser.

First, let's set the setting. For awhile, it looked like this.

I tried to imagine what the best coach press conference would be like. I settled on Chewbacca.

"What is your plan for improving the team's less-than-stellar pass protection?"

"Do you think your offense will be too simple for the Pac-12?"

"Can you finally develop a quarterback worth watching?"

A man can dream.

Regardless, Sonny Dykes worked well enough, for those of you who like things like football. Which is me! But probably not you.

Here is one of my photos. It is literally the best photo I came up with from these proceedings. 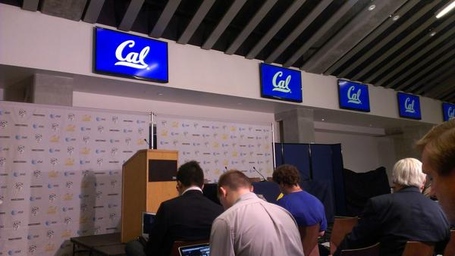 These Cal televisions are most impressive. Not sure why they need one every ten feet; are there thousands of people congregating in the Field Club during football games? No wonder those gold seats are empty!

Here is a photo from Cal Athletics, I'm presuming. The Field Club is a pretty impressive spot to announce this hire. 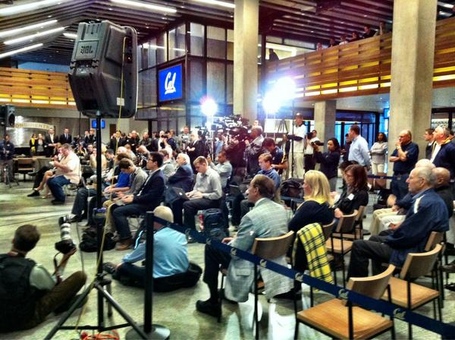 As you can see, there were people watching from the second deck. I even saw Mic Man up there, and he was thoroughly enthused.

Soon everyone showed up. Here's how they looked. 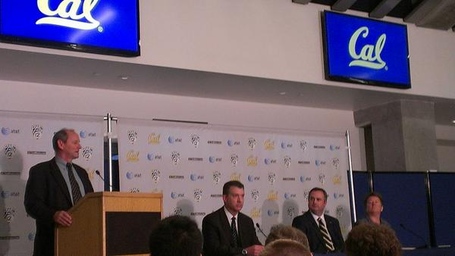 John Wilton is at the podium here. He had a firm British accent, lending an air of formality to the proceedings. The accent immediately made me feel like we were passing legislation in the Houses of Parliament. I was waiting for the press to start going "Hear hear!"

Next up was Sandy. She was quite impressive in explaining the process as it went down. 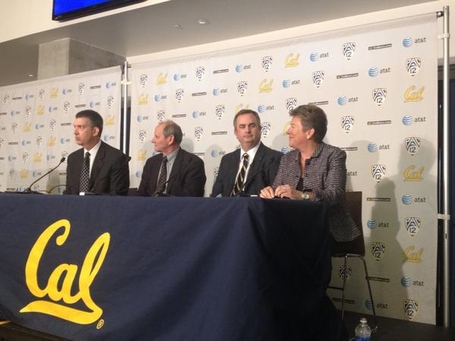 (This photo looks good, and therefore was taken by Cal Athletics)

Sandy used a lot of cool phrases that you'd probably hear at one of those conventions on leadership. She knew this was probably the most public speech she would ever make and came out guns blazing.

She talked about the students.

I want to thank the incredible young men in our football program. They've rallied in the last 16 days. Yes, I know exactly how many days it's been. 16 days and two hours to be exact. They've pulled together and committed to protect and honor Cal football. They've gone about their business of finishing the semester strong academically, getting healthy from a long physical season, and preparing their bodies and minds in the weight room for an exciting and demanding season ahead in an incredibly mature and professional manner, befitting of the world-class institution they represent.

She touched on the football staff and the Athletics support staff that put this all together.

I know that that makes doing your jobs difficult and is never a comfortable thing. But I know that all of the candidates and their current institutions or organizations appreciate the professional manner with which this search was conducted, and that only happens when one, maybe two, people know the full picture.
We have the best leadership team and support staff in America and they've showed us once again why I feel that way and why they've earned those feelings. Thank you.

She touched on the committee that brought Cal to this decision. That committee included players like Allan Bridgford and Nick Forbes, accomplished coaches like Jack Clark and Teri McKeever, and prominent faculty, alumni, trustees and school staff.

We emerged with a definitive priority on resilience, persistence and determination, traits we obviously strive to instill in our studentâathletes, and therefore we most possess ourselves. A commitment to creating a culture and environment in our football program that leads to young men who graduate and leave the university feeling enthusiastic and connected to their total Berkeley experience.

Then she started talking about Dreyers and Superman or something, and suddenly I was thinking of whether to get mint chocolate chip or pistachio after watching Man of Steel this summer. Sorry, but ice cream and comic books sounds a lot more fun than even the Dykes offense can promise, and I was kind of ready to get going and moving.

But in between all of that, she was talking about Sonny Dykes. You know most of his attributes, so I'll pass over that from the transcript. But take a look at what Sandy had to say later about how quickly Sonny made his impression.

I met with Sonny early on in the process. I will tell you â and I haven't told him yet â when he walked out of the room, I said to myself, I think that's the guy. We were fortunate to have great interest in this position, and I felt like in doing my duty to the university I needed to do a full vetting of what was available. 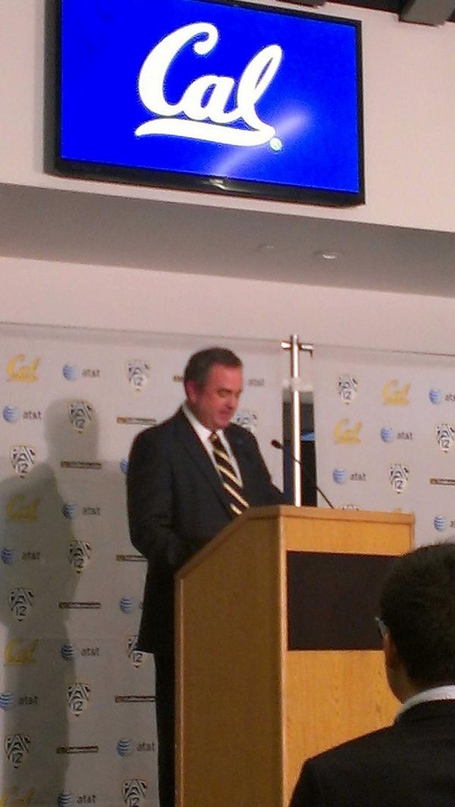 Honestly, I spent most of the time during that press conference staring at that tie. It's an amazing tie. If he went shopping in New York City to find that tie, then I feel like that he's plenty dedicated to perform well at the job.

The Dykes speech is incredibly well-prepared, detailed, and deserves way more attention than my silly jokes can give them in this article. It was very impressive. He touched on all facets of what needs to be improved. He talked about catering the offense to it specific strengths and personnel. He talked about how important it would be to find a defensive coordinator to handle that side of the football (Dykes has made it clear he divorces himself entirely from that side of the football field). He touched on how important special teams is and some of the creative stuff he's done there, which sounds entirely appealing after the years of short shrift that side of the field has gotten.

He talked about his history at Kentucky and Texas Tech and Arizona, plus touched on what he learned from Mike Leach and Hal Mumme in putting together the Airraid. He talked about important it would be to cut down on penalties in spite of the faster tempo and increased number of plays. He talked about how important it'll be to win the state of California and attract the best and the brightest. And he talked about the challenges it would take to improve the team's current academic issues.

We'll touch on each of those subjects in greater detail later on, but it felt like all bases were covered. I was impressed with how thorough Dykes was in addressing what needs to be fixed. I'd say Bear Territory feels better about this hire after that press conference than they did before it. I'd give it an A+++, but since this isn't Stanfurd and we don't believe in grade inflation, let's go with an A.

Oh. I guess he forgot to say Go Bears (at least not without a gentle reminder from Sandy where he had to return to the podium) and Beat Stanfurd, which are apparently fireable offenses or something. Put him on the hot seat now!

Also, Cal Athletics gave him a white hat. I guess that's just to torture us all. 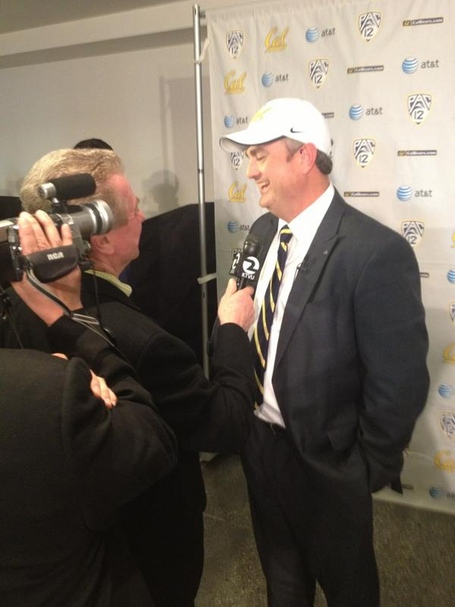 After that, three players plus Barbour and Dykes took general inquiries. Here's the video of the interview. of the Cal players.

Here is quarterback Allan Bridgford, who will be one of the five QBs competing for the starting position. 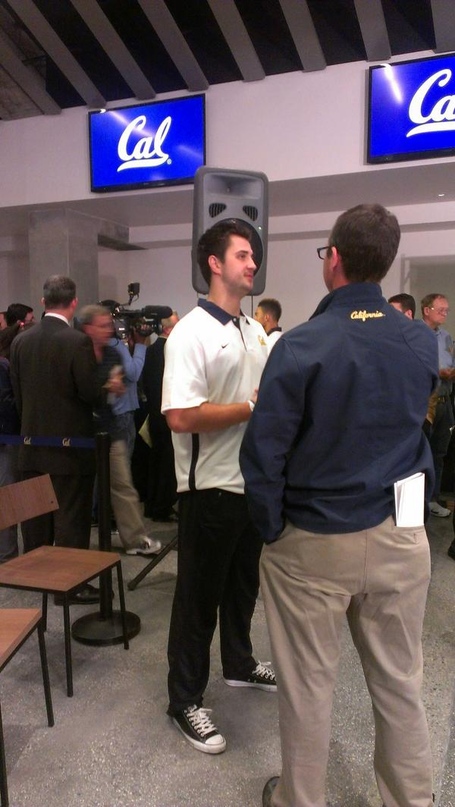 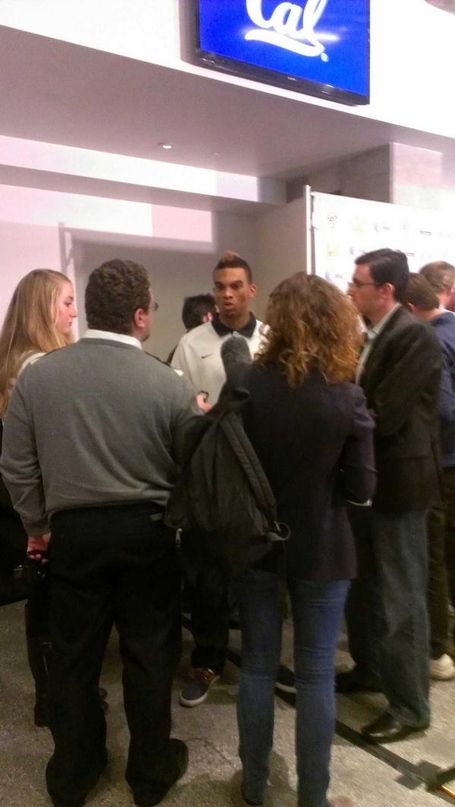 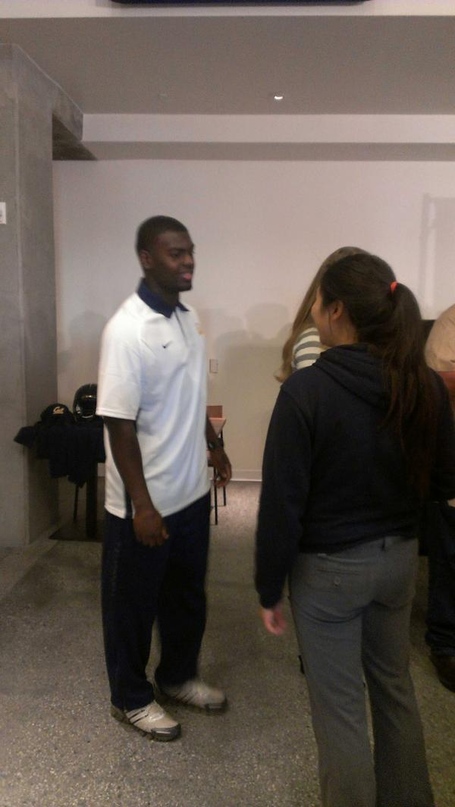 Finally, it was off to the field for photo-ops, where you see the excellent cover photo of the Dykes family on the field. Here is Dykes being interviewed in front of a student section that will hopefully be full opening day when Cal takes on Northwestern. 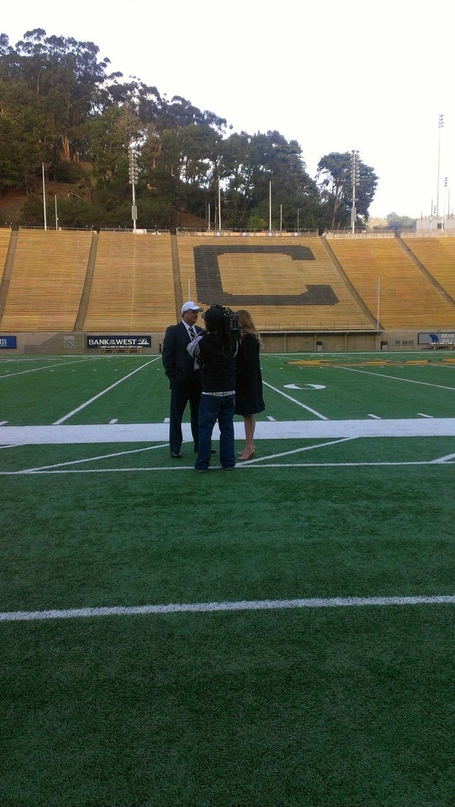 Memorial Stadium is happy to welcome their new family. 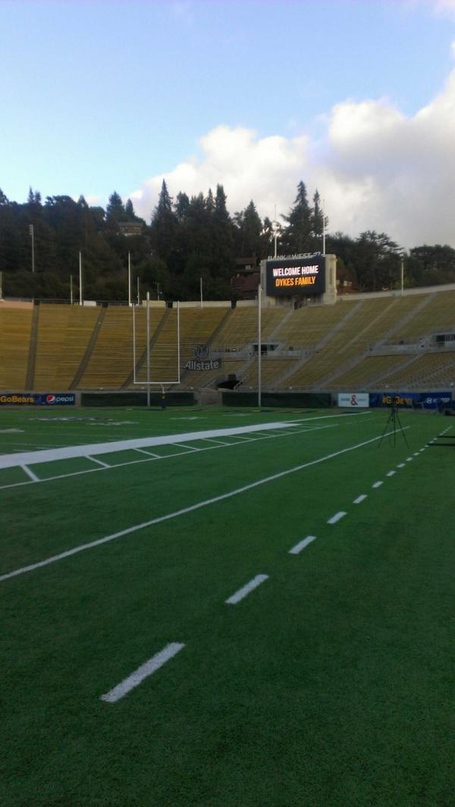 And we cap it off by my favorite photo. 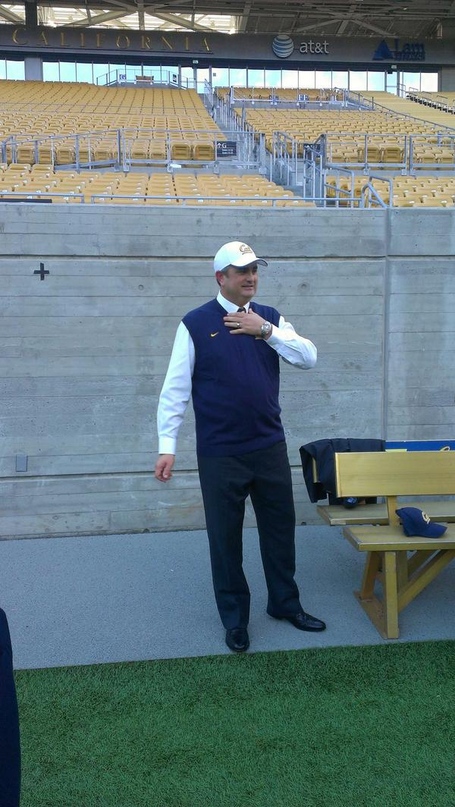 Hey, some of us wanted a sweater vest! Sonny seems to fit well into it.

Plenty more to follow this week on everything Sonny addressed in the press conference, but on the surface of it,it looks like Cal made a good hire. Sandy went out of the box and got an unconventional candidate, and hopefully he can spin some of his innovative ways into something special in Strawberry Canyon.

What are your thoughts on the presser and Sonny's entrance at Cal? Discuss in the comments!