This is the second part in our analysis of how Sonny Dykes and Tony Franklin use the diamond formation in the red zone. Today we look at how they fake the run to open up the field.

In part one (link here in case you missed it) we looked at how the Bulldogs attacked Texas A&M's defense in the defense using the diamond formation. If A&M sold out to stop the run, Tech could get a 1-on-1 matchup with star receiver Quinton Patton and a cornerback. If A&M respected the pass, the Bulldogs could use its seven blockers to plow through the Aggies' front seven.

We continue our two-part analysis of how Louisiana Tech uses the diamond formation in the red zone. Today we will focus on how Tech baits A&M into biting on the run, which opens up the field for passes. Because the defense is naturally compressed in the red zone, opening up the field is crucial to the success of the passing game. Let's take a look at how the Dykes-Franklin offense does it.

Our first example today (and third overall) takes place late in the third quarter. Louisiana Tech's defense can't stop Texas A&M so the offense is doing its best to keep pace. Thanks to several ill-timed A&M penalties, Louisiana Tech is back in the red zone. At 1st and goal they show the diamond. 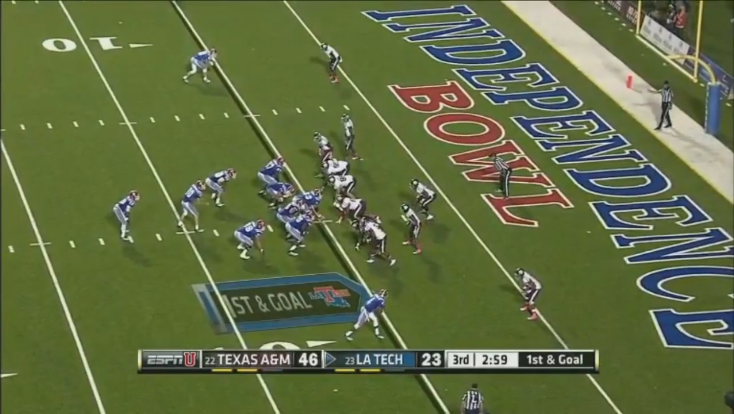 Texas A&M comes out with a 4-3 look. Two linebackers are on the lined up alongside the defensive line and the Aggies have nine defenders in the box. Although it looks like Tech's receivers are single-covered, one safety will try (emphasis on try) to help cover WR Quinton Patton (bottom of the screen).

How can Tech open things up for General Patton? 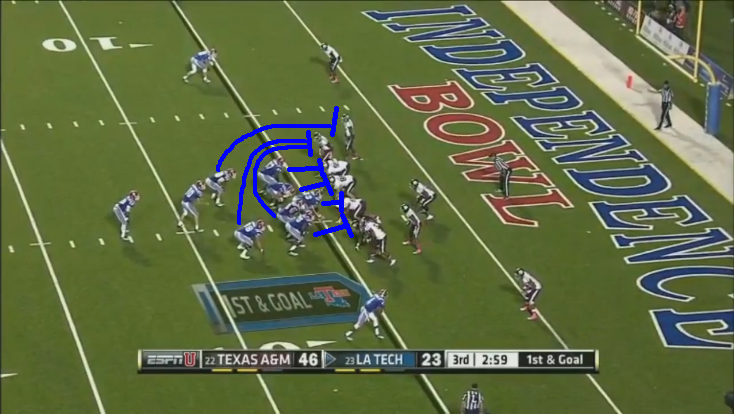 Just as we saw in the first two plays, the Bulldogs will pull a guard and use the fullbacks as run blockers. The center and right tackle will fall back into pass protection while everyone else moves ahead with run blocking.

As the play begins QB Colby Cameron looks like he's getting ready to hand off to RB Kenneth Dixon. 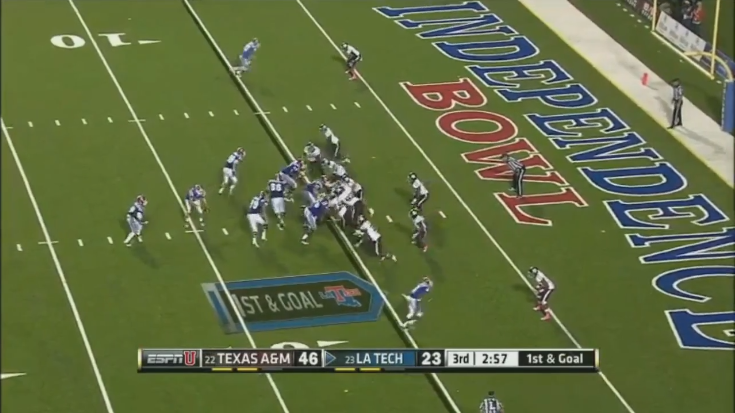 The playaction and run blocking are designed to pull the field side safety (closest to the middle of the field) away from where Tech wants to throw the pass. Meanwhile the boundary side (side closest to the sideline) outside linebacker is unblocked. This leads him into the backfield and the safety isn't too far behind him. 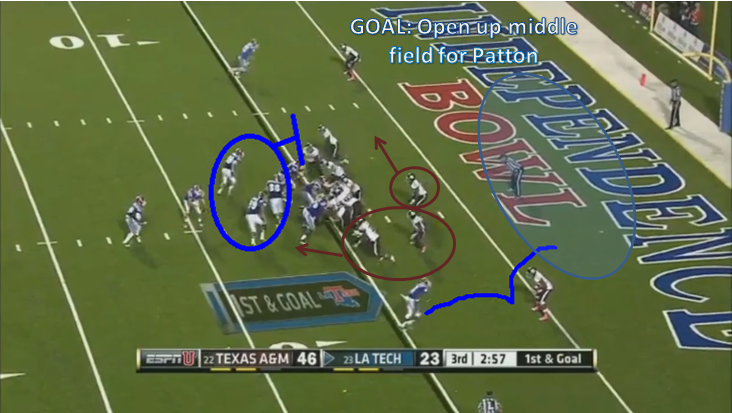 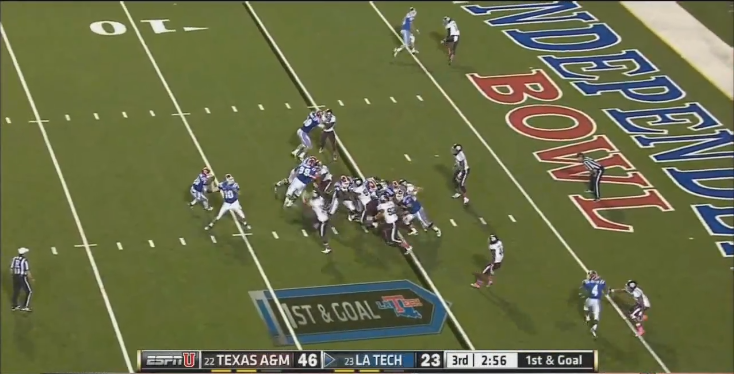 With all linebackers occupied at or behind the line of scrimmage, Patton has tons of room to operate. The boundary side safety backpedals towards Patton but it's too late.

This is a difficult throw for Cameron to make. The OLB is in his face as he winds up. He has to lead Patton or else he'll throw it into the arms of the boundary side safety. It's not a huge window, but it's wide enough. 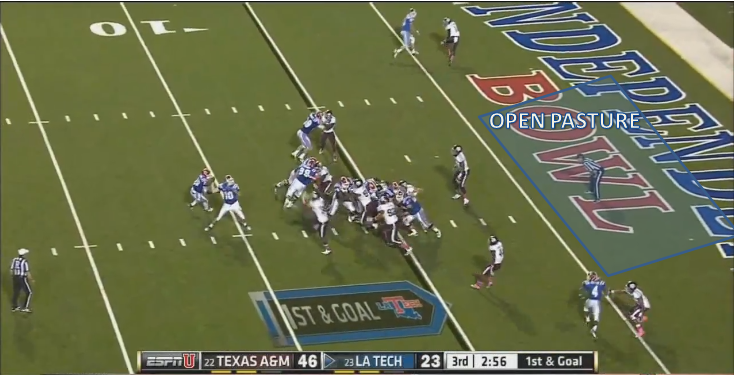 Cameron threads the needle towards Patton. 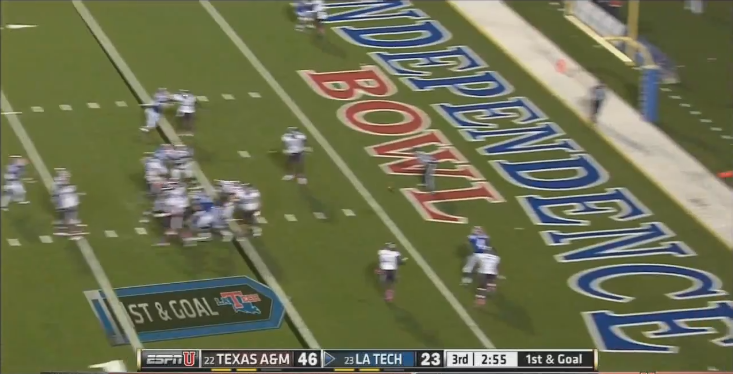 And he hauls it in for a touchdown. The corner can't believe he was burned by another stutter step and the safety kicks himself for pulling up too close to the LoS. 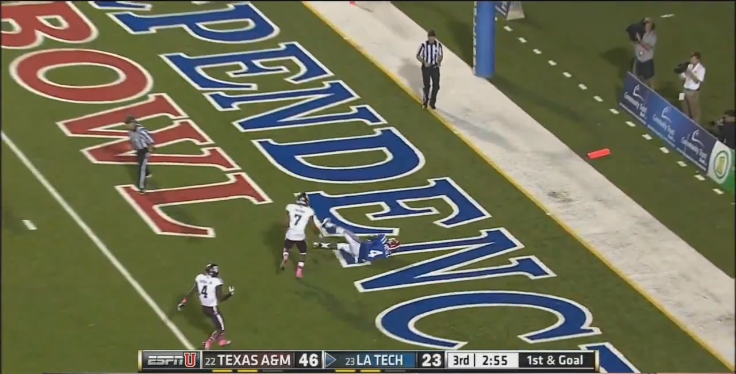 Here's a clip of the play in regular speed, followed by a slow motion replay.

Our next play takes place early on in the midst of LA Tech's furious fourth-quarter rally. The Bulldogs just returned a Johnny Football interception for a TD. They have a chance to turn this into a one-score game with a two-point conversion. Once again, LA Tech trots out the diamond formation. 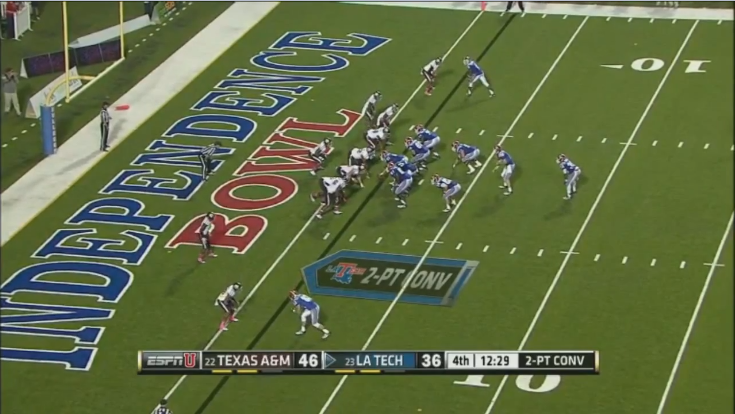 As we have seen several times already, Texas A&M crowds the line of scrimmage. This time they "only" have 8 in the box, but the safety by the "B" in the end zone will come in on a blitz.

LA Tech will fake the run to pull the middle linebacker and safeties towards one side of the field. They don't pull the guard this time and they opt to split the fullbacks--the right FB helps the right tackle and the left FB briefly blocks an outside linebacker before releasing into the flat. 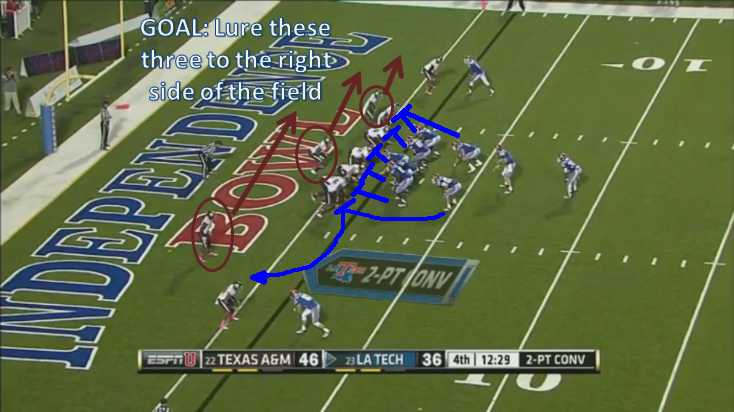 The QB Cameron fakes the handoff to Dixon. 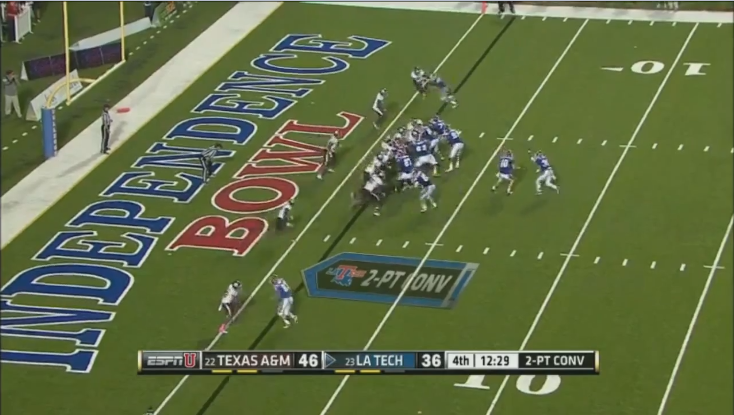 RB Kenneth Dixon will pull the non-blitzing safety and middle linebacker towards the right. Meanwhile LA Tech has both receivers and the left fullback run routes to the left. 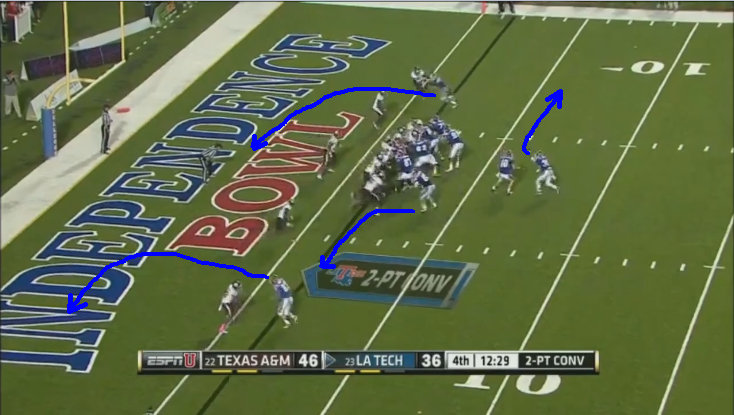 After faking the handoff, Cameron rolls out to the left. Both receivers are well covered and the fullback has to stop the blitzing safety. 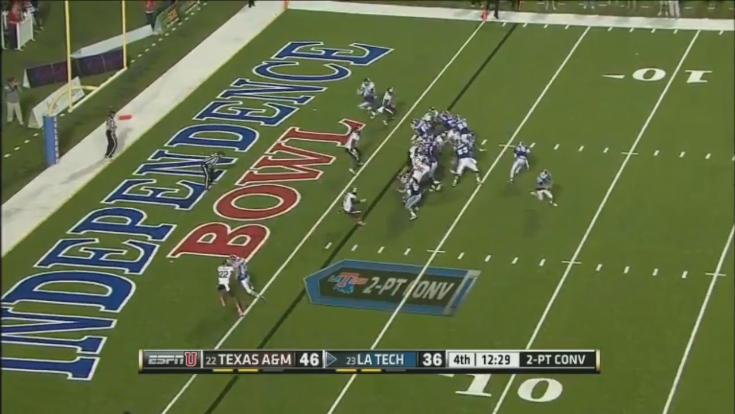 Fortunately for Tech, the blitzing safety loses his footing when he tries to change direction when he sees Cameron roll out. 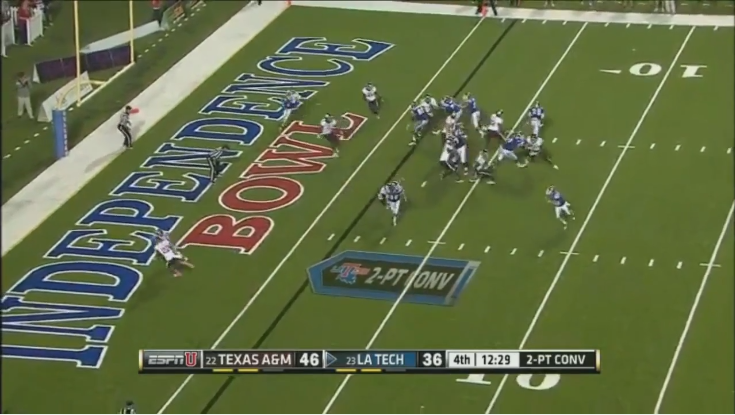 With the safety down for the count, Tech has three players (vs. one A&M defender) on the left side of the field. 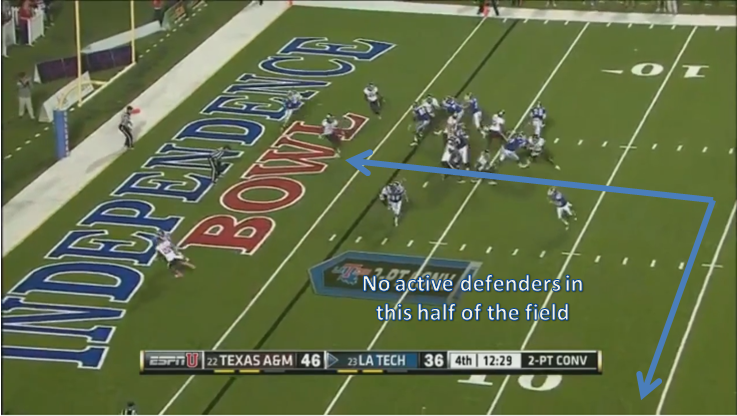 Tech has a couple options here. 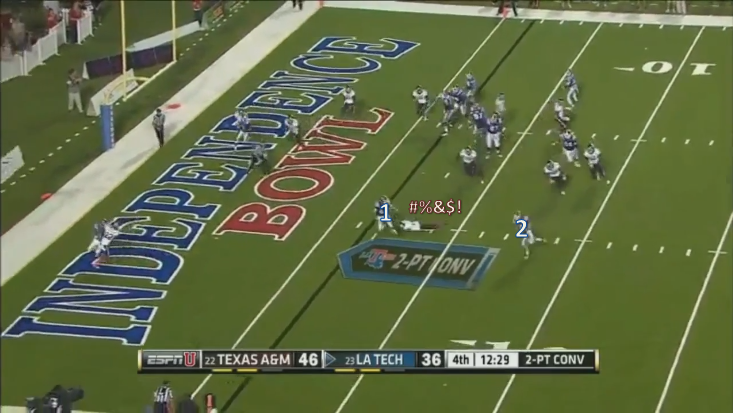 Cameron can (1) pass to the FB or (2) run the ball in for an uncontested conversion. If the CB releases coverage and tries tries to stop the FB or Cameron, Cameron can loft a pass to the WR. Basically, A&M is DOOOOOOMED. 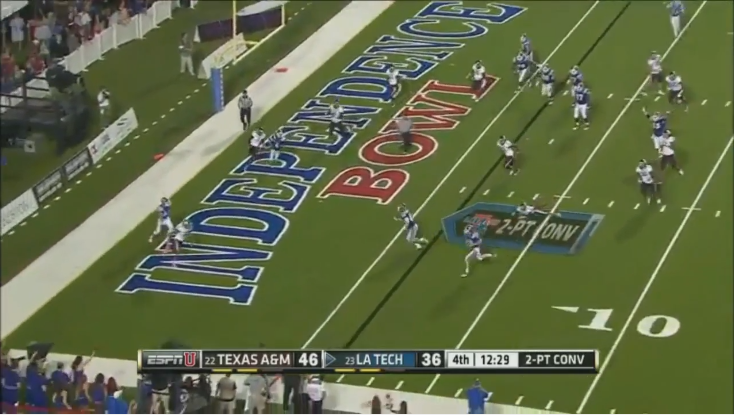 Cameron opts for the easiest option: run the ball in for the conversion.

Here's a video clip of the play (followed by a slow motion replay).

In this series of plays we've seen how Louisiana Tech fakes the run (with both run blocking and playaction) to get defenders out of position. Even though A&M started double-covering Patton, LA Tech still found ways to get the ball in the endzone. It's no surprise that Louisiana Tech was 7th in the nation in converting red zone opportunities to touchdowns. This was a pretty good Texas A&M defense, too. They didn't allow more than 30 points to anyone--except the Bulldogs who put up 57.

We've seen four different plays from the same formation with the same personnel, yet Tech ran four completely different plays from it. Overaggressive play from the Texas A&M defense allowed Tech to reach the endzone fairly easily. Clancy Pendergast's defense would have struggled mightily against this offense. I can picture LA Tech running that last play over and over again to get a FB (who is actually a tight end) into open space as the defense focuses on the WRs, RB, and QB. When this offense is rolling, it takes a very sound, disciplined defense (the LBs and safeties, particularly) to slow it down. Franklin and Dykes obviously have several tricks up their sleeves to bait opposing defenses into a trap. Watching this offense develop (and watching the defense try to learn how to defend it) will be very exciting this spring.