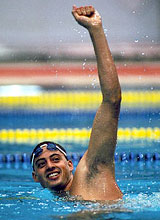 Oh, did I forget to mention the Olympics? Silly me. He competed in three Olympic games, winning golds at each. He was the most decorated athlete at the Seoul Olympics, the summer after his graduation. By the time he retired, he had won ELEVEN Olympic medals,EIGHT of them gold.