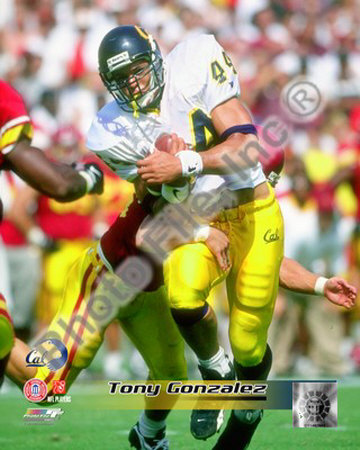 It took Mooch and his West Coast offense to fully exploit Tony's skills as both an explosive run blocker and deep receiving threat. In his junior season of 1996, Gonzalez caught 46 passes for 699 yards and 5 touchdowns. He was named all-Pac 10 and first team All-America by the Football News and Sporting News magazines.All the while, of course, Gonzalez was logging double duty as a starting forward on Cal's basketball team. In 1996-97 he developed an offensive game to complement his rugged rebounding and led the Golden Bears to a surprise berth in the Sweet 16.