But lest you think that he is just about Cal sports, Montgomery too has dedicated much of his time and energy to philanthropic efforts in Africa. He spent a year volunteering at Malawi Children's Village, a village based orphan and other vulnerable children support program in Mangochi, Malawi. It now supports over 2,000 HIV/AIDS orphans living with members of their extended family in 37 villages. MCV supports children from birth to eighteen years providing, shelter, food, safety, health care and education until they can live independent healthy lives. There Montgomery designed and implemented intensive math and English tutorial programs for the high school aged children. These efforts helped MCV orphans pass the national exam (similar to the US SAT) at a rate four times greater than the national average! Upon returning to the United State Montgomery served as president of the board of the US Non Profit that over saw it and along with other board members spearheaded efforts to raise funds which built a new high school and vocational training center. In a small coincidence, one of Montgomery's students just recently graduated from University and in July will be making his first trip to the United States to train for the Clinton Global Initiative! 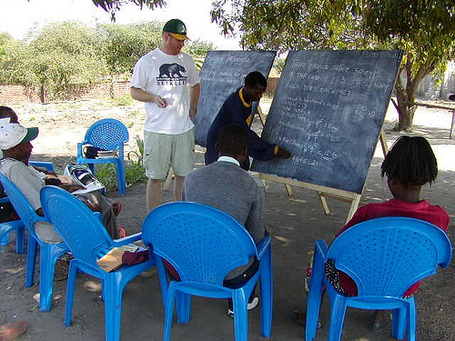