Cal vs. Northwestern pregame thread: The long wait is over

Today is the day we've been waiting for. Will Sonny's second year be more sunny?

Share All sharing options for: Cal vs. Northwestern pregame thread: The long wait is over

One year ago this weekend, the 2013 California Golden Bear opened their season--and the Sonny Dykes era--at home against a nationally ranked Northwestern Wildcats team.  The Bears showed flashes of brilliance on offense, some creativity on special teams, and a suspect defense on the way to a 44-30 loss to the Wildcats.  Despite the loss, Cal fans had some optimism that the Sonny Dykes era would get off to a good beginning.

But then the rest of the season happened.  Let's skip what happened next, shall we?

Suffice it to say that we have been waiting a long time to get the bitter taste of 1-11 out of our mouths.

For what it's worth, we have some love in downtown Evanston from one local pizzeria: 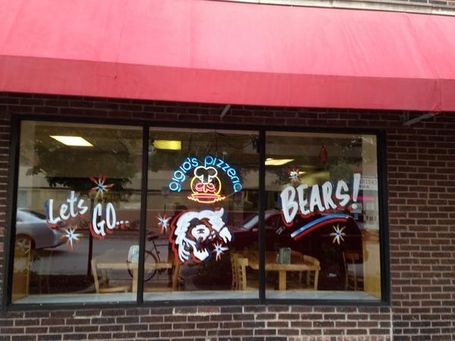 Well, maybe we're not the "Bears" they mean here.  But we'll take it, amirite?!?

At least one Northwestern fan was ready for the game this morning:

Just finished a jog thru Evanston wearing this. I got one "fuck you!" #mustbegameday #GoBears pic.twitter.com/Cxz5DhBqgp

My guess is that the NW fan was just faking indignation.

This is your pregame open thread. Warm up for the game here.  Watch for a link to the gamethread and first quarter thread as kickoff draws near.

And if you're watching on TV, look carefully if they show the Cal crowd.  The face you see might be one of a CGBer.

Cal vs. Northwestern: Golden Bears kick off 2014 with victory