Lost in Injury Gate Resurrection & ill-advised suspensions, Cal has a starting QB they can trust in true freshman Jared Goff.

Yellow Fever: Goff's feel for the deep ball. It certainly seems as if Northwestern wasn't playing him to go deep at all, as evidenced by the first half, but they made zero adjustments in terms of dropping their safeties deeper as the game went on, even when Harper and Treggs started to burn them a bit more. If only there weren't those tipped passes...or that Ellis character.

Leland Wong: You could say I was most impressed by the special teams. Punter Cole Leininger proved why EA Sports thinks he's our best player, but the biggest shock was kicker Vincenzo D'Amato being responsible for all ten of our first half points and the first Bear Raid touchdown.

Sonny Dykes and Tony Franklin did a good job of living up to their hype. With the passing game in particular, the offense was as advertised. We knew we had talented receivers and Richard Rodgers, Chris Harper, and Bryce Treggs proved to be lethal with the ball in their hands. I was even more impressed with Jared Goff. He had great pocket awareness and stayed cool and calm while always moving in the pocket and stepping into his throws when the pressure came. Off of that, I think Franklin called a good game. He started with the short passes to build Goff's confidence and rely on his famed decision-making and accuracy, then starting calling deep passes when the defense tried to focus on the short game. While Kline has the reputation of the bigger arm, Goff threw some great deep balls, hitting Harper perfectly in stride.

Berkelium97: I was impressed with the second-half adjustments on offense and Jared Goff. I thought the first half of the game was what we were going to see most of the season from Goff--lots of short passes, solid accuracy, and an ability to take care of the ball. He would play enough to show we have a passing game in order to keep the running game going. When the coaches started having him pass downfield in the second half I was thoroughly impressed. He missed a few throws, but he was solid enough to keep the defense from stacking the box. I had no idea he had this kind of downfield passing ability in him.

Ruey Yen: It is great to see a Cal offense that can move down the field on a consistent basis again. Goff showed great poise all game long. I can definitely see this offense getting better with time when Goff is allowed to throw down the field more.
LeonPowe: Goff was unflappable. No flapping. We're going to be in good hands. Also some defensive adjustments to lessen the bleeding from the secondary ( we do seem to be soft in the middle to tight ends though).


Charley Lu: Leninger's Anger smash. D'amato perfect on all FG attempts. Last but not the least, Sonny making a statement with a gutsy fake FG call and Bouza delivery the BearRaid era TD. Last time I got this excited about watching Bears Special Teams was 2006 with DeSean returning punts. I get the feeling that Khalfani Muhammad is going to be a special kick returner capable of busting loose anytime.

HydroTech: Goff. I think we have a phenomenal QB running our offense. I think if he stays healthy, that he could put up some monster numbers this year. But aside from monster numbers, I think he's actually a very good QB too. For a true freshman, he showed incredible poise, decision-making, accuracy, and QB skills. He went through progressions. He looked off defenders. He took care of the football. He didn't force the ball. I know it's just one game, but I think Goff has the potential to be an All-American QB, and be the best Cal QBs we've seen since Aaron Rodgers. (Not to be construed as me saying he's going to be just as good as Aaron Rodgers in the NFL, or that I believe after seeing this one game that he has NFL potential.) 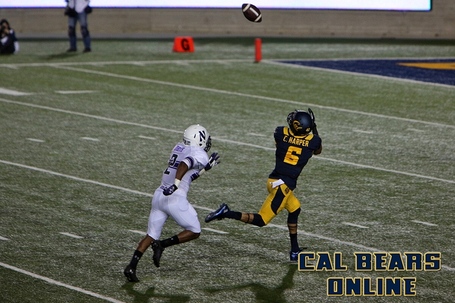 atomsareenough: The thing that stood out to me was clearly Goff and the offense. What a great first game for the true freshman! That has to give Cal fans a lot of hope for his potential both in future years of his Cal career, and for subsequent games this season. The offense clearly wasn't firing on all cylinders just yet, but it still racked up 30 points and 550 yards of offense, which is a great sign. If we can clean up a few details (receiver drops, a couple bad reads/throws by Goff, the run blocking, cutting down on the false starts and other penalties), the ingredients are there to be very potent, and pretty quickly. I was a bit less impressed by the defense, but encouraged by the fact that they played a decent game for most of the second half. Special teams were pretty good, aside from the kickoffs out of bounds. They were a net plus for us.

Vlad Belo: What impressed me most? I know it's the easy answer, but for me it was Jared Goff. I was impressed by his poise and command of the offense. Maybe I had lower expectations for a true freshman starting a season opener, but he blew my expectations out of the water. The 2 pick 6's were bad breaks, but Goff's body of work for the entire game should make us feel like we have a competent leader behind center.