We continue to search for the next Cal head coach. Today we evaluate one of the most promising defensive coordinators in the nation, Notre Dame's Bob Diaco.

Whether you like it or not, Notre Dame has the inside track to the national championship game. The Fighting Irish have been winning with defense--they have to, considering they only average 27 points per game. Over the past three years the Notre Dame defense has turned from a maligned unit to one of the biggest, most dominant defenses in the nation. Let's get to know the architect of that defense, Bob Diaco.

Our brethren at SBNation's Notre Dame site have a great introductory breakdown of Diaco's defense. It's a basic 3-4 defense with a few wrinkles.

Diaco's base defense is a 3-4 front with a Nose Guard, two Defensive Ends two Outside Linebackers and two Inside Linebackers. The term "no-crease" is in reference to the fact that all of those front 7 players are close to the line of scrimmage and aligned in a manner that eliminates vertical and horizontal creases between the individual players.

Diaco picked up much of his defensive philosophy when he spent three seasons (2006-2008) as the Linebackers Coach under Al Groh at the University of Virginia. Groh is part of the Bill Parcells to Bill Bilichick coaching tree that has produced several top flight coaches such as Nick Saban. As a relatively young coordinator there isn't much written on Coach Diaco's defense specifically but by studying the defenses of Bilichick, Groh and even Saban we can garner some insight into some of the things that Coach Diaco is doing with his defense we watch the Fighting Irish. 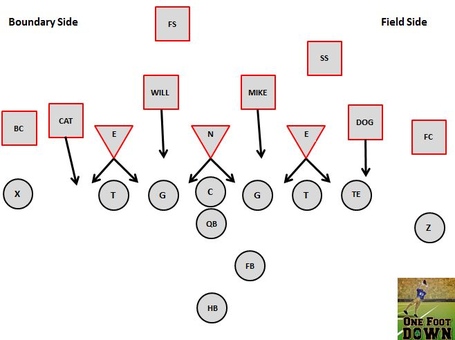 They have grown to like this defense over in South Bend. It also fits with their recruiting, just as Bob Gregory installed Cal's 3-4 defense to match the strengths of his personnel.

Overall I have become a big fan of the flexibility associated with the 3-4 and I am happy to see the Notre Dame defense starting to look like a Notre Dame defense again. There are many advantages to the 3-4 defense that I think lend themselves to success at Notre Dame. The flexibility on the field is obvious but I also think that the 3-4 plays to Notre Dame's advantage in recruiting. Elite defensive linemen, specifically defensive tackles, are few and far between. The best ones typically get offered by 20-30 programs and Notre Dame has historically struggled to get enough of them on the roster. The 3-4 defense requires a few less of those guys and a few more big and athletic outside linebackers that tend to be available in greater numbers.

Diaco has been coaching various aspects of the defense for over a decade now. He has been quite successful at each stop.

As defensive coordinator at Cincinnati

After his stint at Cincinnati, he followed Brian Kelly to Notre Dame.
As defensive coordinator at Notre Dame

Bob Diaco very quickly turned the thoroughly mediocre Notre Dame defense into an elite defense. Within three years he built arguably the best defense in the nation. That 24.24% opponent red zone touchdowns in 2012 is an unbelievable statistic. As far back as cfbstats.com goes, no one has allowed TDs on fewer than 30% of red zone possessions. 24.24% is otherworldly. This is an incredible defense.

How Much Would He Cost?

Since Notre Dame is a private school, it does not release salary information. It's certain he would receive pay increase if he came to Cal. How much of an increase we can offer him remains to be seen, however.

Brian Kelly knows his prodigious defensive coordinator will be a popular candidate for some upcoming vacancies and has the utmost confidence that Diaco has been prepared to lead a program.

"I want to provide all of my coaches an opportunity, if it advances their career to a leadership position," Kelly said. "We want to be able to give them that opportunity. But quite frankly we don't spend much time talking about it. You know Bob, he doesn't want to talk about it. And he didn't come to Notre Dame to be the head coach somewhere else. He came to Notre Dame to help win a national championship. We've got a lot of work left. But if the right situation comes for Bob and he comes to me and asks me to give him advice on it, I certainly will."

Diaco surely will be a hot commodity after developing the Notre Dame defense into the nation's top scoring defense this season, his third as coordinator (he came over with Kelly from Cincinnati, where he was defensive coordinator for one season). He also was promoted to assistant head coach this season, and Kelly made it sound like Diaco is ready to run his own program should he decide the time is right.

"I think he clearly understands that it's more than just fielding a team on Saturday," Kelly said. "He did before he got here. That's why he's been with me. But I just think he has a great sense of Notre Dame and what Notre Dame means and how important it is that it's not just about football. I think any great head coach is going to have to have more than just an understanding of Xs and Os. You've got to understand the players, and you've got to understand the university and how to work within that entire setting. I think Bob really knows that well."

Diaco has mostly coached in the midwest, so he may be more likely to take a Big Tweleven or Big 12 job. No one really knows, however.

He has been a great coach and leader off the field. Since being named assistant head coach he has taken a larger role in player development.

BGI: What are some of those new responsibilities he has passed on to you?
Diaco: "We have a lot more conversation about team building, continuity and different things that will continue to add energy to the team. Any other outreach things that I can be a part of and help facilitate for him, as it relates to [the American Football Coaches Association]. Taking a proactive role with officials in interpretation of rules and things that we can do that way.

"Even just the other day in one of our scrimmages he hit me with a couple of quick situations that I needed to process that he’s never done in the past, to make game day decisions. I didn’t actually say it to him, but I’ll say it right now, I really appreciate that he did that. It was really awesome."

He preaches full commitment and attention to detail in every facet of life, not just football. Presumably this would carry over to the classroom.

"We’re interested in creating players and developing players that just love hard work. They bring the same energy to every task – we talk about it all the time."

Diaco added that it is ingrained in his defense to attack the smallest of tasks, like sweeping the floor; in the same manner they would attack an offensive player on game day. However, as good as the defense has been so far this season Diaco says there is still room for improvement.

I'd love to see Diaco and his players sweeping the floor in the same way they would attack an offensive player.

Diaco is an excellent recruiter--just look at the number of four- and five-star players on the ND defense. Ask Notre Dame fans about Ishaq Williams and they'll tell you how committed he is to recruiting.

Williams never made it to Penn State. Two days later he was on his way to South Bend. Four days later he was enrolled in school. The only way the Diaco-Ishaq story could become any bigger in Notre Dame lore is if Williams is as good as people think he is.

He's a big fan of size when recruiting players on defense. He said he doesn't chase players based on single features such as size or production. He says he wants the total package (though big packages may be better).

For those worried that Notre Dame is merely looking for bulk, Diaco did a nice job of acknowledging the subtleties, while making it clear that the Irish stay within their program while looking for positional fits in their defense. When asked if there’s a line to draw between size and speed, Diaco again gave a great look inside the system.

"So as you look at your position, you hope it’s all within a small little change. You’re still not going to come off the profile from a size standpoint to get a little guy who is really fast, which a lot of teams do. A lot of teams chase the production, chase players for players’ sake, chase the ratings, chase flashes of things. But then you plug them into your defense and it’s like, ‘He really can’t function. They can’t do the jobs we ask them to do.’ So it’s important that we stay disciplined in our approach that way."

"We’ll just be going to 11 on 11," Fleming explained, "and then he’ll just bring up some kind of story that he feels relates to the topic. But we don’t. So we’ll just go along with it. Just like ‘yeah, yeah, that’s really good coach.’

"I mean, he’ll talk about turtles. He’ll talk about scorpions. I think he might have read a lot of books when he was younger or something like that. But he’s always got a story for something."
...
"Some of the stories he tells, I have no clue what they mean," Fleming said. "But I just, you know, go along with it. This is on film, so hopefully he doesn’t see this."

Diaco on the Tulsa game being a turning point? "I wouldn’t prescribe to that," Diaco said.

What kind of moment was the receiving the game ball after Army? "I’d say it was a good moment that is like any other good moment," Diaco said, comparing it to a film correction an outside linebacker made at practice that afternoon.

When pressed to answer what he learned at Notre Dame that he had to experience, Diaco still was unwilling to concede.

If we're hiring a current coordinator, Bob Diaco should be the top candidate. He's built the defense that propelled Notre Dame into the national championship game, he recruits very well, and he says all the right things when talking about player development on and off the field. He is an excellent candidate for any open head coaching position.

Q + As Regarding Cal's Coaching Candidates