For the first time in 11 seasons, Cal is without a Football Head Coach. To make sense of the coaching search, CGB is embarking on a multi-part Q & A series profiling some of the candidates proposed. For our first part, we talked with Josh Kirkendall of CincyJungle.com and Levi Damien of SilverAndBlackPride.com, the SB Nation affiliates for the Cincinnati Bengals and Oakland Raiders (respectively), for a closer look at Hue Jackson. Thanks to both for their time and effort; head over to their two sites to say hello. As always, Go Bears!

1. Jackson spent the last two decades coaching positions on offense. Why is he now an assistant defensive backs coach?

JK: We believe that this was mostly Marvin Lewis' doing in Cincinnati, helping a friend to get back on his feet after being fired from Oakland; Lewis and Hue Jackson have a deep personal respect for each other, having spent several seasons together with the Washington Redskins and Cincinnati Bengals. Jackson remained without a job when the Bengals signed him on February 17, which is generally too late for someone to find a head coaching gig, or at the very least a coordinator's position in the NFL. There wasn't a spot offensively for Jackson, so the organization just made up two titles and gave him the role of assistant defensive backs coach and assistant special teams coach.

Ultimately Lewis just wanted Jackson's personality on the team, coaching up the players with a unique style that reverberates with his guys. When Lewis said when Jackson was hired:

"Hue is a tremendous addition to our staff," said Bengals head coach Marvin Lewis. "I relied on Hue greatly when he was with us (in 2004-06), and his success overall in the NFL, including being selected for a head coaching position, is well documented. He has expertise in all aspects of the game, and we are fortunate to have obtained his services."

LD: It took him a while to find another coaching job after what happened with the Raiders. Teams were hesitant to bring him in as a coach for fear his ego would get in the way. In Oakland he was hired as the offensive coordinator and the head coach in waiting. No head coaches in the league wanted to risk being undermined the same way. It seemed as if he was not going to find a job until his old friends with the Bengals reached out to give him a job. Any job.

2. How would you describe Jackson's typical offense?

LD: I see Jackson as the type who utilizes the weapons he has to their fullest. Darren McFadden had his best seasons under Jackson because he actually went to McFadden and asked him what plays in which he performs the best. It is in much the same way John Fox did with the Broncos when Tebow took over.

LD: He understands the value of the play action pass. That's how Jason Campbell had success with the Raiders prior to his injury. So, run to set up the pass.

4. Jackson was apparently the driving force behind the Raiders' trade of a 1st and 2nd round pick for Carson Palmer. Good decision or bad decision?

LD: It was a decision that had to be made but I think his old boss with the Bengals took advantage of him. And Hue's statement afterward about it being "The best trade in all of football" was a stretch that drew quite a few snickers from those in attendance. Then he ended up joining the team with whom he made the trade so he had Palmer for 10 games and then was on the receiving end of the draft picks as well. Great trade for him. 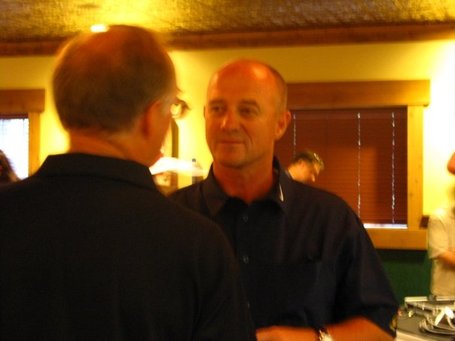 Cal's next head coach will probably define how we view this man's legacy.

5. Why was Jackson fired after just one season?

LD: He was fired mainly so Reggie McKenzie could bring in "his guy". But Mark Davis was NOT happy about Hue's words and actions late in the season. Hue took over as the interim GM and even after the big trades that brought Carson Palmer and Aaron Curry to Oakland, following his season ending loss, he said he was "going to take a more active role in the entire organization". Also after repeating the same nonsense all season about his taking responsibility for the team not being unprepared, he then threw his players and his coaches under the bus in that same press conference. That speech was a big reason he was fired.

6. What kind of relationship does Jackson have with his players?

JK: From our perspective as an assistant coach in Cincinnati during both stints, he develops great relationships with his players; he speaks to the guys and they listen. When they're not playing well, he coaches them up and when they're emotionally sunk, he talks them up. He has a strong voice and presence with his players, getting the most out of the positions he has coached with the Bengals.

Ironically the Bengals and Raiders play each other this weekend -- you can't make this stuff up in sports. Defensive lineman Richard Seymour said of Jackson (link):

"Obviously, we have a lot of respect for Hue so I'm sure we'll give him a hug after the game, not before probably, stay out of his way," Raiders defensive tackle Richard Seymour said with a smile Monday. "But he's a guy that we have a ton of respect for. He was a heck of a play-caller for sure. And he loved his players. That's something that we'll take from it. Whether a guy's here this year, that's just the business of the NFL.

LD: He appears to have a good relationship with them. Although, when Tom Cable was fired in favor of him, several Raider players were very angry about the move. They liked Tom Cable very much and two of them left as free agents to join him in Seattle (Zach Miller, Robert Gallery). A third left this offseason as a free agent (Michael Bush). The final player was Shane Lechler.

7. Do you have any sense of how Jackson's skills/experience/demeanor would translate to the college game?

JK: Some of the relative personality traits he inspires with his players will definitely translate. He's the type of coach that listens to his players, but inspires them too. He's a passionate guy but also sympathetic in the sense that if one of his players is having an awful game, he seeks them out to talk them back up. Though I've never viewed him as someone prophesying grandeur, telling players that they're the greatest thing since sliced bread, he'll speak with honesty that will reverberate -- something that the players have always respected.

LD: I think he would fit in very well at the college level. A college head coach is the face of the team which is just what he wants. The first time I heard him speak, I thought he was either head coach or politician material. You can add salesman to that as well. He could sell the idea of attending his university to any recruit.

8. Have you had any personal interactions with Jackson and, if so, what were they?

JK: I wouldn't say personal per se. Just as a member of the media in camp and games and such. He loves the attention he gets as the head coach of a team. As the offensive coordinator, he didn't speak to the media until the very last day of training camp. And when he finally took the podium it was like he knew he was the man we all were waiting to see. He ate it up. He speaks of his Irish coffee the Saturday before a game and his mani-pedis. He even had that spread in Sports Illlustrated complete with pictures detailing his trips to get mani-pedis. He also attends postgame press conferences in some pretty snazzy suits that look like he is headed for a night out at the Coco Bongo Club. If the team were a success, no one would question such things. But when the team failed to reach the playoffs, he had already opened himself up for a great deal of criticism.