A Golden Spotlight on Cal vs. Colorado

"Bear market rallies can be especially frustrating for investors, because they lead to a great deal of false hope and optimism." - Investopia

Share All sharing options for: A Golden Spotlight on Cal vs. Colorado

Not this time, Bear fans.  Not on this day.  The Cal men dug deep, rallied 'round their banner, and found a way.

In a completely unrelated coincidence, nitroglycerine and AED defibrillators are on sale at the Tang Center.

Flame away, but the Cal defense is still light years ahead of last year's brittle shell.  If you look past the yards and points, guys are in position to compete;  they just aren't winning the majority of the plays.  Yet.  Syd Thompson is one of the better Cal defensive backs in recent history.  But he took his lumps during his 1st year as a starter.  With McClure out, we have two corners, one nickel back, and one safety who are all in their first year as starters.  When you factor in our inability to mount a consistent pass rush, blitzing or base, that's not a recipe for success.  But why am I encouraged?  Why do I still look at 2013 and '14 as night and day?  Last year, we were simply inept.  Out of position.  Helpless.  Hopeless.  Easy money.  This year, we've given up both yards and points.  But for the most part, guys are there.  We're getting beaten by great throws and tough catches.  One Hail Mary away from 4-0?  I'll take that.  And when our young defenders start winning their one on ones?  That'll be the day.  For those who enjoy looking through HD photos, check out this free gallery courtesy of my dad, Leonard Chong, here.

He was nice enough to them all uploaded and processed in time for this week's column.

First up, let's acknowledge first blood to the Bone Formation.  It's short yardage in the red zone.  Cal's version of the diamond formation, "The Bone," has Gingold and Hudsone as the up backs with Lasco deep. 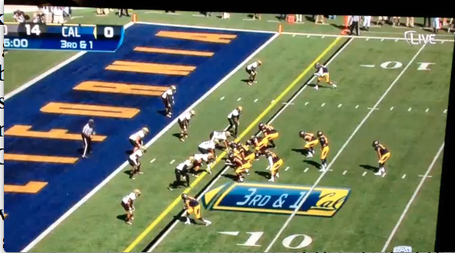 Pre-snap, Gingold goes in motion towards the top and skews the formation into a super-uber-strong side right.  The Colorado defense shades accordingly so that their lone deep safety is towards the right. 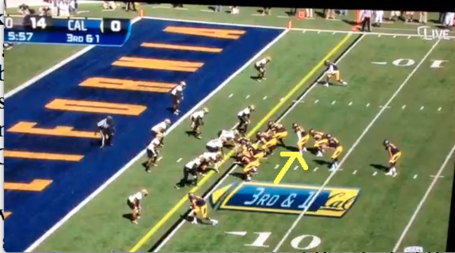 At the snap, the Cal O line blocks to the right and Hudson follows suit.  But GIngold looks to block towards the backside while Goff hands it off to Lasco. 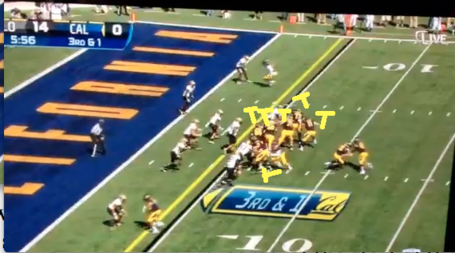 Goff pulls it back and finds Gingold wide open.  It's the first time we've run this type of motion out of the Bone and it's good for a much needed touchdown.  Great to see Gingold join the #PartyInTheEndzone.  He's one of the team's hardest workers and quietly does his job despite running into very large men on a regular basis. 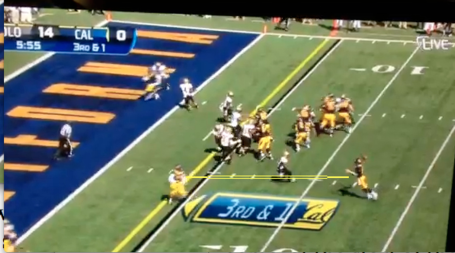 More love for the War pigs.  Cal goes 3x1 with WRs to the bottom and Hudson in line to the top as a tight end.  This draws four Colorado defenders towards the bottom of the screen to match up with man coverage and safety help over the top. 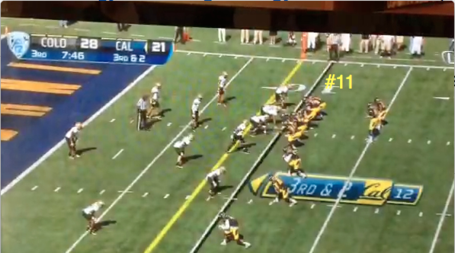 At the snap, Hudson executes a great kick-out block while Rigs and the rest of the line block hard towards the strong side.  There's a huge off-tackle lane opened up for Muhammad. 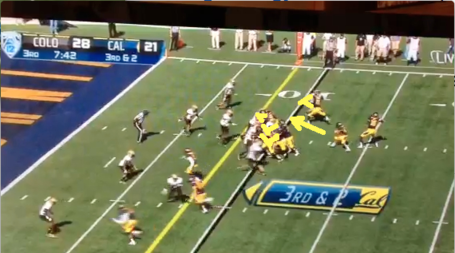 As Muhammad darts through the hole, there's still a CU LB and Safety with angles on him... 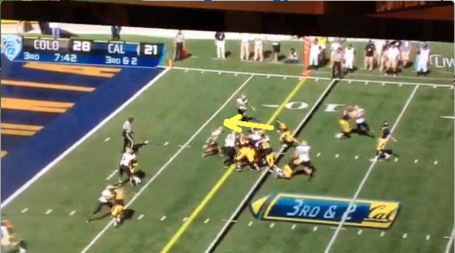 ...but they underestimate his speed.  Touchdown Bears!  Huge props to the Oline.  We didn't dare run on 3rd and short all of last year.  But this one was well-executed across the board;  every lineman won his battle and Hudson dominated his man to create the lane.  It's plays like these which set up those sexy back-shoulder throws or fades to the wide-outs because the defense has to respect the play-action hand-off. 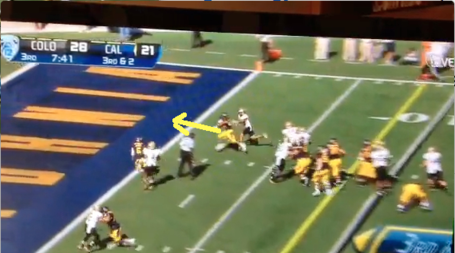 Gotta give some props to Mr. Anderson.  Cal has been pinned deep and comes out in a 3x1 with Anderson on the line as a tight end.  We've been primarily running out of this look. 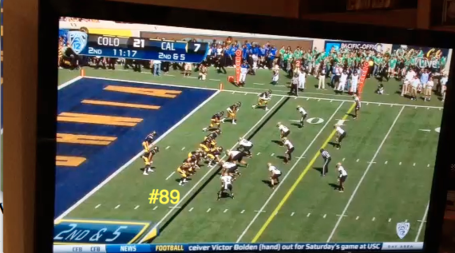 CU brings pressure, but Cal has a quick pass called.  The trio of wide receivers run a series of slants.  This draws all the middle defenders their way and leaves Anderson in solo coverage with a linebacker... 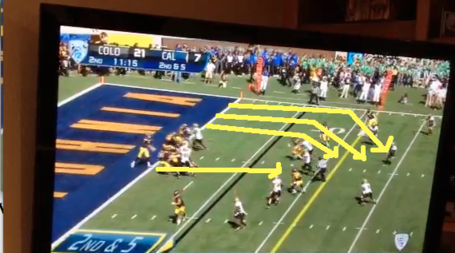 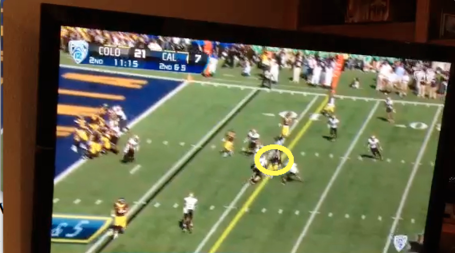 Once again, Cal comes out 3x1 with Anderson on the line as a tight end.  CU has been playing press-man all day and has their safeties aligned to cover Cal's wideouts towards the bottom of the screen. 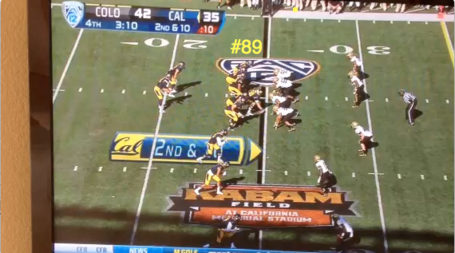 Lasco releases and draws a linebacker towards him in coverage.  Cal's trio runs two slants plus a go route.  Anderson heads towards the sticks again, but gets his route jumped by a Colorado LB. 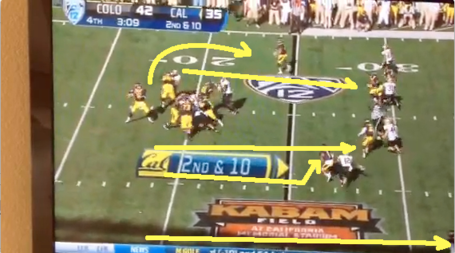 The pressure gets to Goff and he rolls out.  But Anderson sticks with the play and turns his stick route into a deep corner.  There's no way the Colorado linebacker can run with him...Meanwhile, the rest of the CU defense has sold out to cover Cal's other wide receivers.  There's no one staying deep. 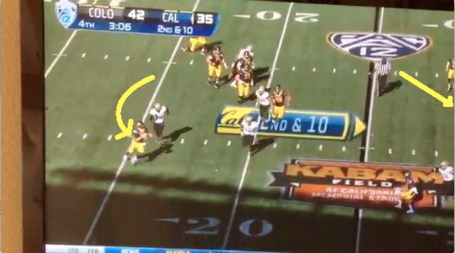 ...and Goff lofts it perfectly to Anderson to tie it all up with minutes to play in the 4th.  Clutch. 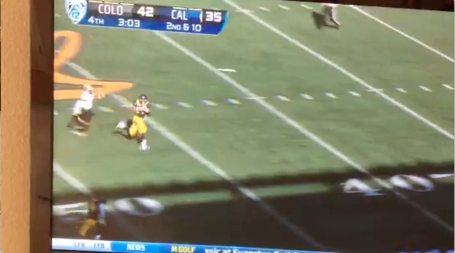 There was much ado about "why didn't we just cover Spruce?"  Well, we tried.  At the start of the game, we played solo coverage across the board while keeping either a safety over or a linebacker under Spruce.  And that was good for a 21-7 deficit with just one Spruce reception after one quarter.  If you were the coaches, what would you do?  All those throws beating man coverage?  'Cuz our safety was paying attention to Spruce.  All those QB runs?  No one left underneath if LBs have to drop into coverage...'Can't have your cake and eat it too.  No matter how good you look in your tinfoil hats and how many "Covah Spruce 4 Life" beanies and buttons you ordered.

Afterwards, we played things more straight up and still got beaten over the top, on deep outs, or via holes in our zone.  Cal threw a variety of coverage looks.  Sometimes they worked.  Many times, we got beaten by good routes and accurate throws.  When your pass rush is inconsistent, even while blitzing, it's a lot to ask of young defensive backs to stop the home run while also staying tight enough for the dink n' dunk game.

Let's take a look at how Kaufman tried to disguise his coverages.  At the top, we've got a corner on their outside receiver, a safety over their slot receiver, and a LB in the slot.  We usually blitz the linebacker or keep him underneath while passing coverage of the slot WR to the safety.  This is a Cover 4 look. 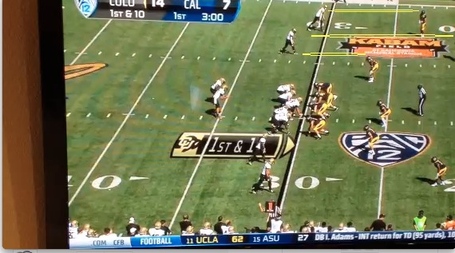 But at the snap, our outside corner dashes towards the flat while our safety heads outside to pick up the receiver.  This looks like the Cloud variant of Cover 3.  Meanwhile, our LB stays in underneath coverage.  This forces the Colorado QB to abort his throw... 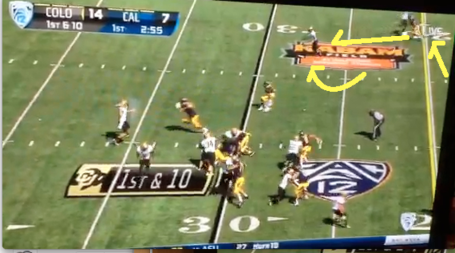 ...which allows Barr to come barreling in.  Even though he misses the sack, it results in a throwaway.  Score one for a disguised coverage. 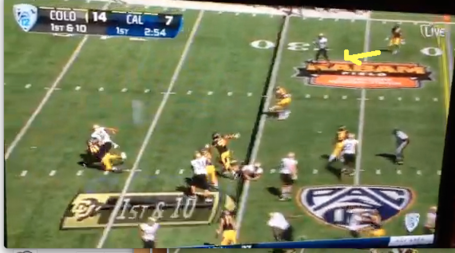 Now Cal comes out again with a similar alignment.  Colorado's QB can't be sure whether we're playing Cover 4 or a variant of Cover 3. 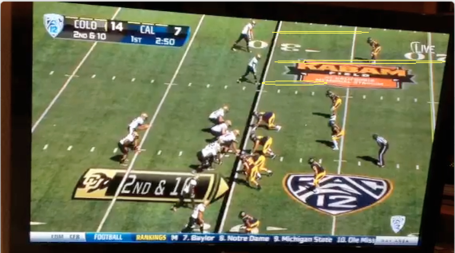 And at the snap, it looks like Cover 4.  The OLB releases the slot receiver while dropping into an underneath zone.  But the safety, Piatt, picks up coverage... 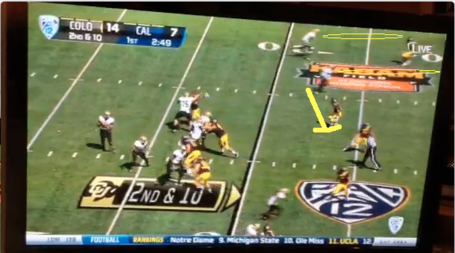 ...and makes a great play on the ball to knock it away.  Nothing fancy here.  Just a Cal defender winning a one on one matchup. 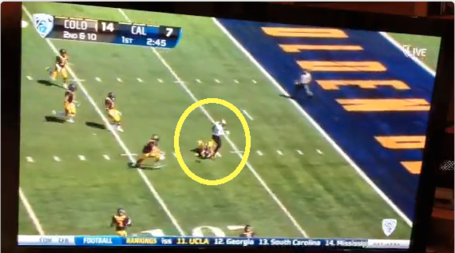 It's been a chess match all game.  Cal has mixed it up between rushing 3/4, or bringing as many as 5-6-7.  We've gone with a lot of Cover 1 leaving guys in solo coverage, but have also sprinkled in Cover 3 and 4 looks.  Time is running down in the 4th and CU has the ball again.  We look like we're in Cover 1 and have one safety deep while putting most of our box defenders on the line of scrimmage. 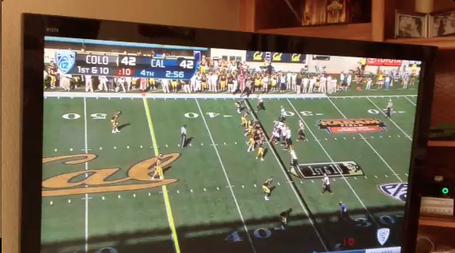 It's a zone blitz.  Cal only rushes three while dropping four guys into underneath coverage.  By sending our field-side slot defender on a blitz, he has a free run at the QB. 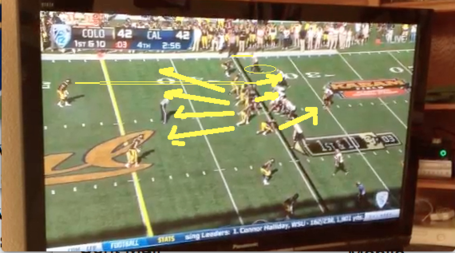 The CU QB knows that Cal has been playing a lot of Cover 1 and which should leave only three guys playing underneath zones.  But because we're rushing 3 and dropping 8, we have double coverage with Kearney (#30) and Jefferson (#7) bracketing their outlet receiver... 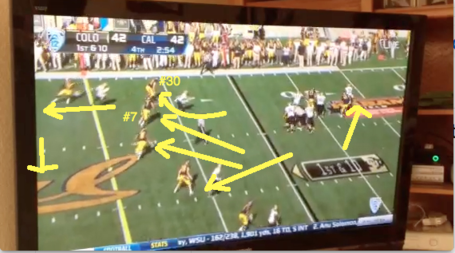 ...backside pressure gets to the CU QB and he throws on the run...where Kearney makes a great break and comes up with a crucial INT. 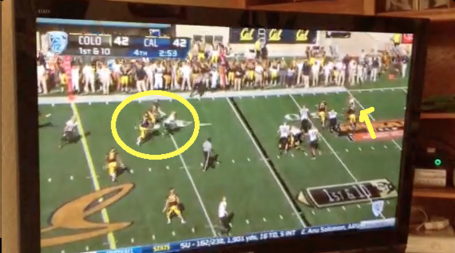 Strangely enough, I _liked_ our defensive effort against the Buffaloes.  We lost some battles. We got scored on.  True.  But we didn't lose.  At no time did I sense panic or a loss of morale.  Our boys stood fast.  Our guys stepped up.  Our men came through when it mattered.  I will absolutely love it when we see our secondary dominate a frustrated opponent.  And it's going to happen.  Piatt, Allensworth, Walker, Dozier, are all first-time starters.  Cubs grow up.  And grow big, sharp nasty teeth.

If you can't appreciate that, then you probably are busy crafting a manifesto about how our body language during the pre-game huddle means that Dykes punts kittens at an evil uptempo pace instead of focusing on defense.

At least it should be indisputable that the Bear Raid 2.0 is everything we hoped it would be and that Goff Has What It Takes. Our run game continues to improve while he's been darn near automatic with clutch throws.  I feel like asking for more would involve ScarJo, illicit substances, and possibly getting arrested.  Which might be worth it if you throw in a Rose Bowl.

We are who we are.  Really young and thin in the secondary, yet we're exposed by an inconsistent pass rush.  There's no magical scheme which will fix that.  We're effectively rolling the dice and hoping our guys can make some plays.  I'm okay with that because at least we're still in the fight.  I love this team's grit.  It very well might be 120+ points and a 5 hour game in Spokane next week.  But this team has gotten a taste of winning.  Don't bet against them.  Go Bears!