Sure, FY14 has already ended, but let's look back at FY13 first.

On June 30, 2014, the 2013-2014 Fiscal Year will end. I really hope this post goes up prior to that date, so this opening paragraph makes sense tense-wise (Twist Note:  It didn't). Despite the fact that FY14 is almost over, the release of FY13 numbers for the Cal Athletics Department somehow managed to elude me for (presumably) months and months. I do not have any idea when they released them, but I stumbled upon them when I was working on that piece about the USA Today article. I realize that this seems a bit dated insomuch as FY13 ended about a year ago. Of course, the numbers do not change and if we have not looked at it yet, it is as good a time as look at the numbers for FY13.

Revenue was 91mil, which is substantially higher than ever. Valued reader BandAlum has provided the chart of revenue over time. You can open in a new tab to make it larger. 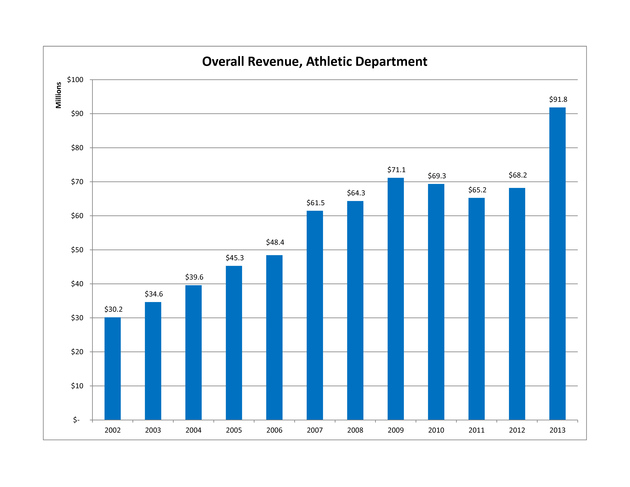 That sounds great, but when you dig a bit closer, things are not as good as they seem. Of course, each year these factors will apply, but it is important to take them in turn and look at the year over year context for them.

Contributions were through the roof. We've discussed this previously, but the it appears that the firing of Tedford and hiring of Dykes (which took place in FY13) led to an explosion of donations. 26 million in donations. Look at this chart, also from known valued reader BandAlum: 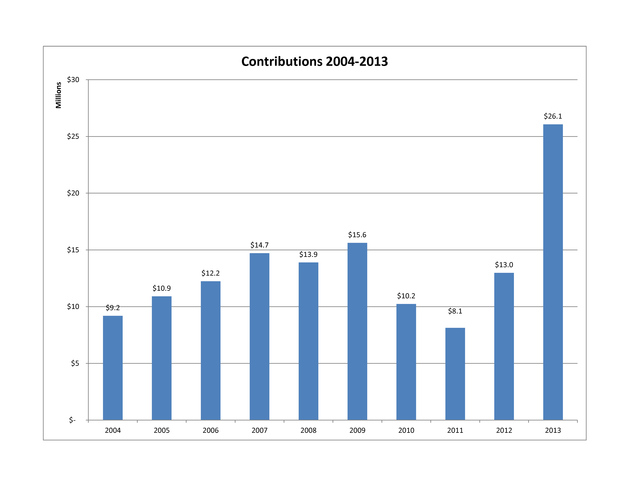 It is double FY12! It is somewhat unclear what the donations will be for FY14, because Cal hasn't provided those numbers yet fully (and the FY isn't even over yet). However, I am going to go on the assumption that we will not see a matching level of donations.

FY12 was a bit of an outlier because of the new coach smell. Going 1-11 is not going to inspire people to donate.

There is also 11 mil in endowment. The endowment is an investment fund designed to grow over time to produce money for the Department. Although it is unclear from the chart, I presume that the endowment fund listed here is a transfer of income made off the investment fund. Generally, organizations do not transfer principal unless the situation is really bad. Digging into your investment principal is the first sign of an organization's slow death, because they are draining their rainy day fund, basically.

It would be best if the 11 mil of investment income were to go back into the endowment to become principal and grow the endowment even more. So, using the 11mil here is not great, but it is the intended purpose of the endowment, so it's not inappropriate at all. What would be great is if the Department was so self-sufficient that they did not even need to take endowment income at all. First, let's get off of the school's dole, though.

The next largest amount of distribution is the 21 mil from media sources. That is the largest yet and a 7 million increase over FY12. Hopefully, that number will continue to climb! Or, failing that, stay at 21 million year in and year out. We know that Cal could use all the money it can get.

So, this is all very promising. However, when you break it down you see that it's not clear we'll be able to build from this 91mil year. If donations fall back to earth and ticket sales stumble after 2013, then we might find a bit of a crater in FY14. We'll see.

Let's now look at the expenses.

You'll see a listing in there for Transfers To Institution. The dirty little secret of Athletics Departments is that they sometimes pay tax to the school for certain items. This is listed as transfers back to the school. In FY13, it is 2.8mil. So, Cal gave the Department 6.1mil and the Department gave 2.8mil back. That is a net subsidy of 3.3mil.

As this chart from moderately valuable reader BandAlum notes, that number is going the right way! 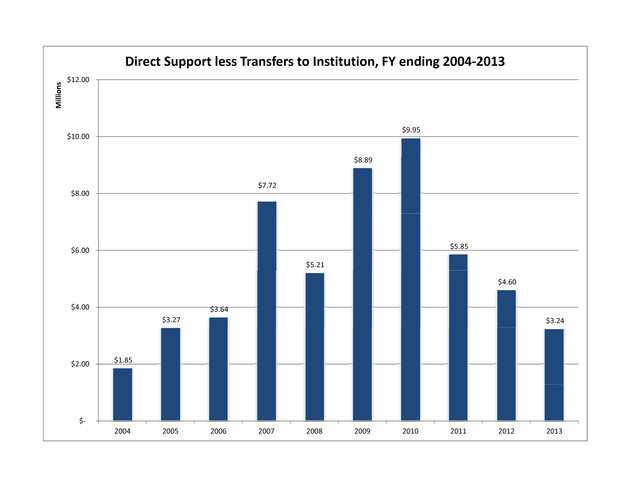 So, wait, the Department made 91mil and spent 76mil, why did they only have 1.4mil profit? That is because THE CALIFORNIA MEMORIAL STADIUM UPGRADE DEBT SERVICE HAS BEGUN!!!!!!!!!!!!!!!!!!!!!!!!!! The feared half century payment of 440mil is underway. Cal paid 14 mil for this year, so the Regents are not going to come and break Sandy's thumbs. CELEBRATE GOOD TIMES, C'MON!

So, when you factor in that 14mil plus a few other mil (more on that in a bit), your total expenses rise quite substantially. This debt service is the new normal, so Cal is going to need to make a lot more in revenue and keep expenses down to be able to service the debt. The half century finger cross continues! 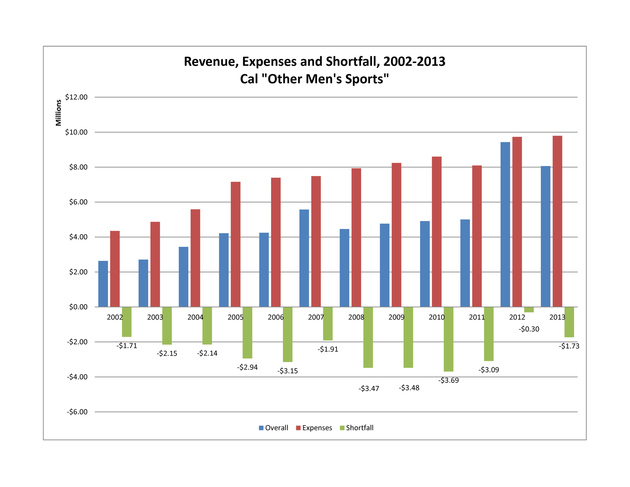 Other Women's Sports still lost 8.5mil with an additional 1.9 lost by WBB. It is what it is. Unless there is a fundamental shift in how Americans approach women's sports, Athletic Departments across the country will basically continue to subsidize financially unsuccessful women's sports programs. Cal is no different. FY13 did include WBB going to the Final Four. We'll see if that creates a financial uptick in FY14 for the WBB program.

There's a lot to unpack here. This is a smashingly successful FY, I would say. Given where Cal was a few years ago, I think a lot of credit should go to Sandy and her team for righting the ship. However, I'm not sure how much we can rely on some of the underlying factors to the success here. Donations are not going to stay at that level, for example. The debt service is only going to increase over time. Sandy still has many challenges ahead of her (Twist Note:  Goddamn I really needed to get this one up before 6.30.14!), so we'll check in every opportunity we can to look at the numbers as they release them. Whether they are releasing the overall financials or the ESP numbers relating to the debt service, this is an extremely interesting time to follow management of the Athletics Department.

What caught your eye about these numbers? Tell us in the comments! GO BEARS!