Cal Athletics Celebrates The Fancy Amongst Us!

Will they realize how poor and young I am and kick me out? Only time will tell!

Share All sharing options for: Cal Athletics Celebrates The Fancy Amongst Us!

The key to happiness in this world is being friends with rich people.  It's so much work to be rich yourself.  Nobody wants to do that.  But if you have rich friends, then you can do all the rich things they do without any of the work involved.  Work to fun ratio is one of the most key ratios out there.

That's why I was so happy when a monocle-clad, tux-wearing friend of mine, CGB's own Cugel, invited me to go to this ESP event.  I, too, pretend to be a rich person as long as I wasn't found out.  So, I put on my favorite pair of suit and practice my patois in an attempt to hide my cockney accent.  I was hopeful I'd enjoy it.

But I knew they'd try to distract the hoi polloi and confuse us.  I knew they'd have booby traps in an attempt to keep us from entering their 1%er lair.  They can't cackle with glee Mr. Burns-style if somebody making under $250,000.00 per year is nearby.

That's why they had this sign there to bamboozle us into going elsewise. 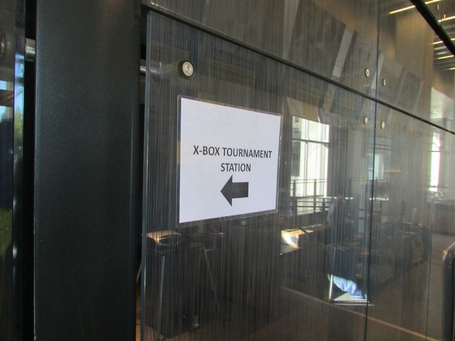 But no, I remained strong against their attempted flim-flam!  I said "NO!  MUST FOCUS ON ENTERING ROOM, IGNORE X-BOX TOURNAMENT STATION!"  Thankfully, I've been a Nintendo man since the late 80s.

I steeled myself and focused and was able to walk slowly and in a wealthy manner into the main ESP Event area.  There, I was greeted with a few different sights.  There were some players (freshmen recruits, apparently) mixing and mingling with the fans.  In years past, I may have been more interested in chatting with them, but now I do not feel like I'm in the same generation as them.  They were born in the mid-90s and I was cognizant of the world by then.  Now, I'm old and creepy.  So, I didn't really interact with them.

Some of them were wearing recycled jerseys, though.  To wit: 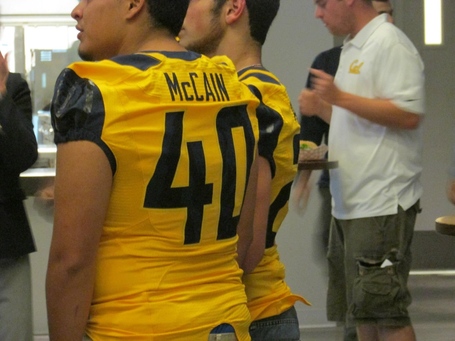 One of the criticisms that we've received in our attempts to become quoteunquote journalists is that we focus on the free food too much.  Apparently, the journalists don't ever talk about the free food, despite the fact that it is ever present and awesome.  By pulling the curtain back, we were showing ourselves not to be journalists and this was hampering our ability to be taken seriously.

In that case, GET READY TO NOT TAKE ME SERIOUSLY, because there was so much food

All of it!  Whatever I wanted.  Whenever I wanted.  For free!  THIS IS HOW RICH PEOPLE LIVE THEIR LIVES!  And it was glorious, so glorious.  I had sandwiches, I had water, I had desserts.  They also had salads and sushi, but I never quite made it that far. 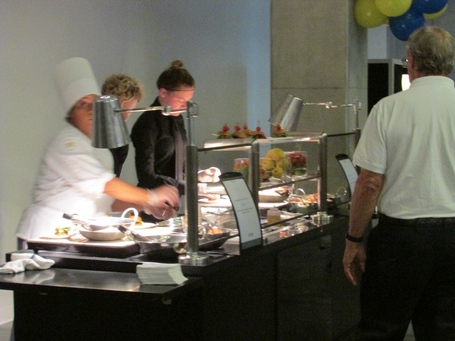 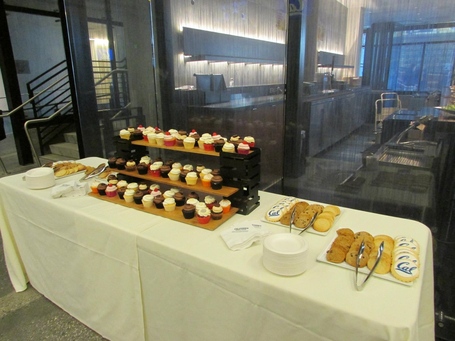 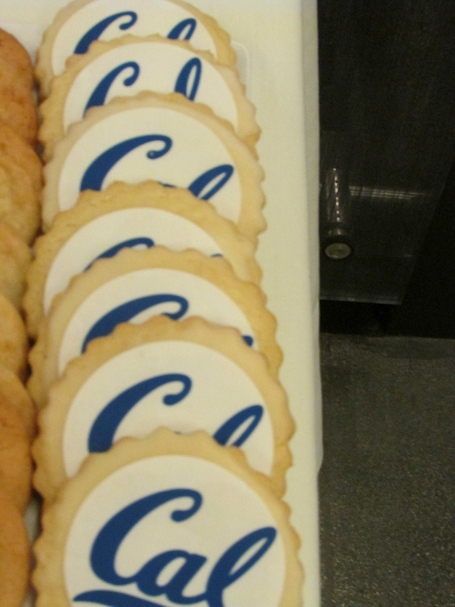 They also had a set up where you could put on the uniforms and take photos with the players.  It seemed a bit too "I once scored 4 Touchdowns In A Single Game" for me, so I didn't do it. 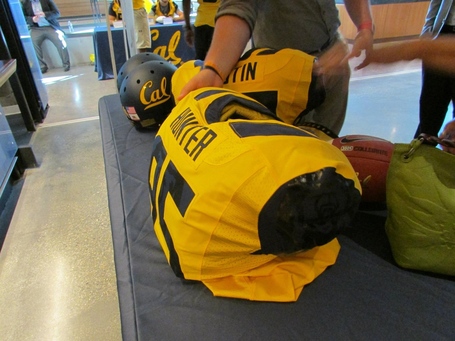 They also had a photo booth, which was so common person.  Needed more jewel-encrusted. 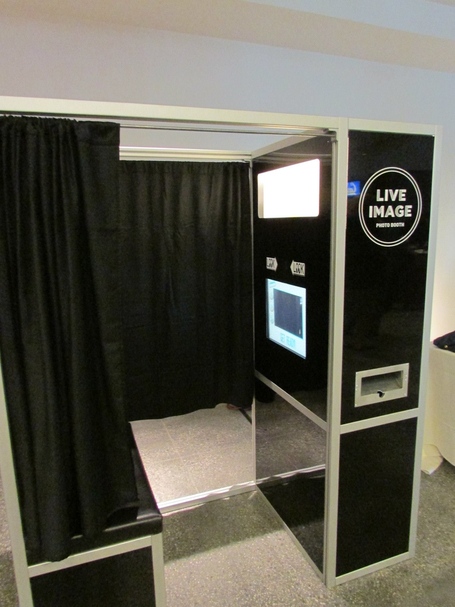 Natch, the coaches were floating around.  We chatted with Yenser who, surprisingly to me, had Southern manners.  I don't know why I was so stunned that one of our coaches would be from the South, considering that many football coaches are from the South and Dykes brought lots of coaches from Louisiana with him.  But he had the usual "sirs."  From my five minutes talking to him, he seemed like a great guy.  Hard working, said he got out the door at 4:45 AM in the morning.  Being a nice guy doesn't necessarily correlate with being a good coach, but seems better than having a mean guy.

Also, got a chance to talk with Coach Dykes.  When we shook hands with him, he looked at me in an extremely earnest and genuine way and asked me how I was doing.  So, I figured if he cared so much about how I was doing, I'd be honest.

I told him I was schvitzing a lot.  Now, my knowledge of my ancestors native tongue may be minimal, but I seem to have a stronger grasp of Yiddish than Coach Dykes, because he didn't know what I was talking about.  So, I said it again and shook my shirt in a manner that got the message across.  He said he was fine and seemed confused that I was schvitzing.

Firstly, let me just say in my defense that it was hot in there!  Secondly, I raised my arm up to him and showed him my arm hair, noting that I had an extra layer of fur.  That doesn't help.

So, Coogs and I chatted with Coach Dykes for several minutes prior to the speeches.  He seems like another nice, genuine guy.  Much more amiable than Tedford (not that Tedford was standoffish or mean, but he just seemed unnatural at these gladhand events, in my experience).  We joke around about the concrete dungeon that is his office.  Basically, Godzilla could be attacking Berkeley and he'd have no idea.  Hell, if Godzilla does attack Berkeley, Coach Dykes office may be the underground bunker to meet at.

So, that was a positive interaction with Coach Dykes.  Jury is still out on his tenure here, but he seems like a charming guy in the flesh. 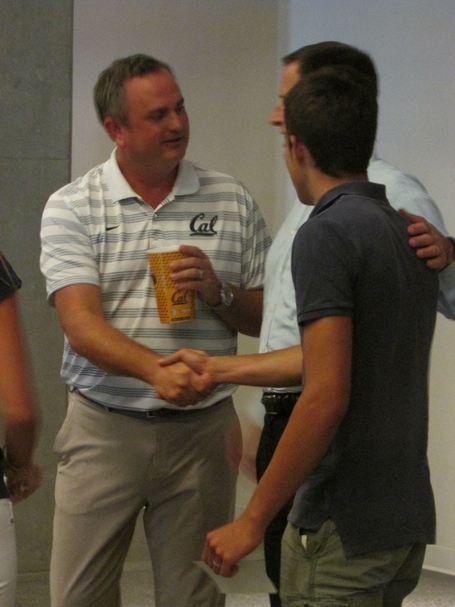 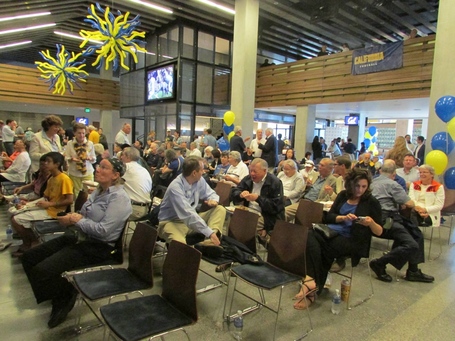 So, then we had the speeches.  First, H. Michael Williams came up to talk.  He said the sort of basic things that Athletic Directors say.  Rah rah sis boom bah! 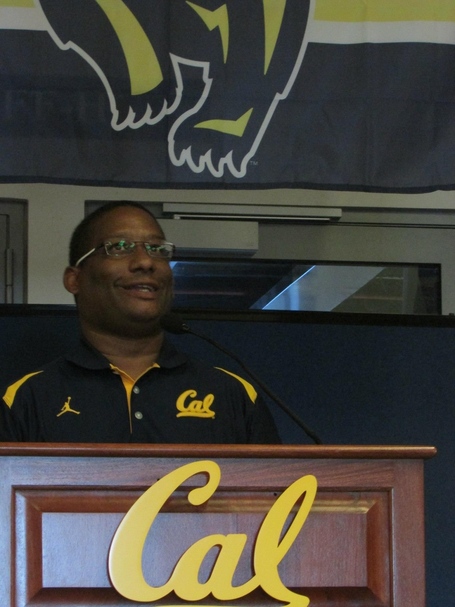 Dykes came up for his initial comments.  He was fairly realistic about the chance for success this year, but felt that next year would be special.  He noted that this was a "get it done" business and that there are not excuses, but had been working hard to avoid the injury problems from last year.

It was also the usual sis boom bah with a bit of "Well, we did go 1-11 last year, so we can't be TOO sis boom bah or else it'll be too Baghdad Bob."  Like I said, he's a charming and engaging speaker. 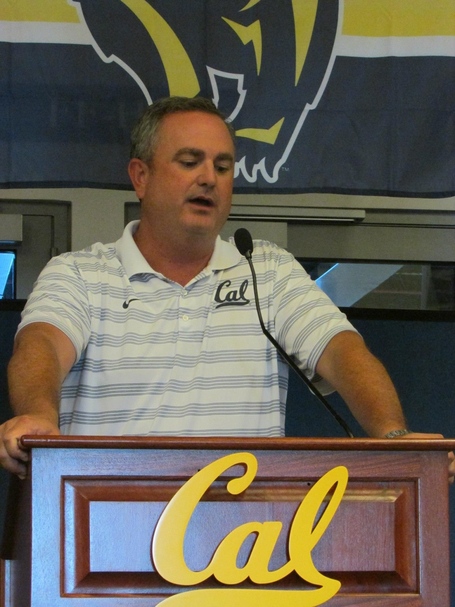 Up next was Art Kaufman and his fiery Southern accent.  He went through a litany of the players on the defense that he was excited about.  He said it so fast, I couldn't keep up.  He actually made a few comments about certain weaknesses on the defense, but it was too fast to take it down.  He said that everybody was starting fresh and last year was last year.  He talked about the hard work and the passion of the players.  He seems like the kind of guy who could get you to run through a brick wall. 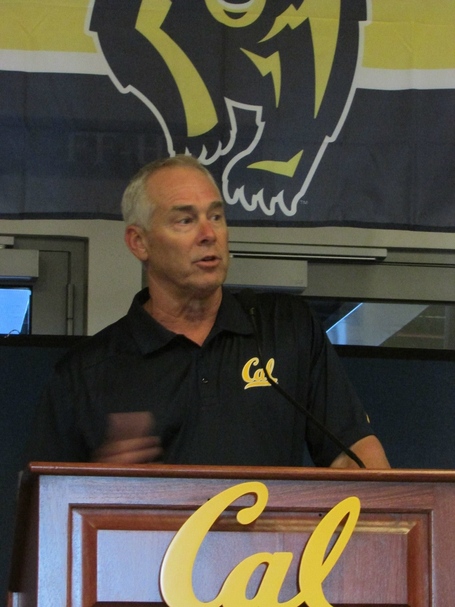 Then, Tony Franklin came up to speak.  He was the opposite of Kaufman's intensity.  He seemed fairly laid back.  He said he was the spitting image of the dark-haired offensive coach youngster that Coach Dykes was talking about earlier.  He spoke about how great the offense was last year and how it was the youngest offense out there.

He felt it was going to improve this year, especially with better running back play.  He liked the improvements for the OLine and felt the running backs were going to run better this year.  He talked about how running backs are the players who can make the most difference as a freshman. 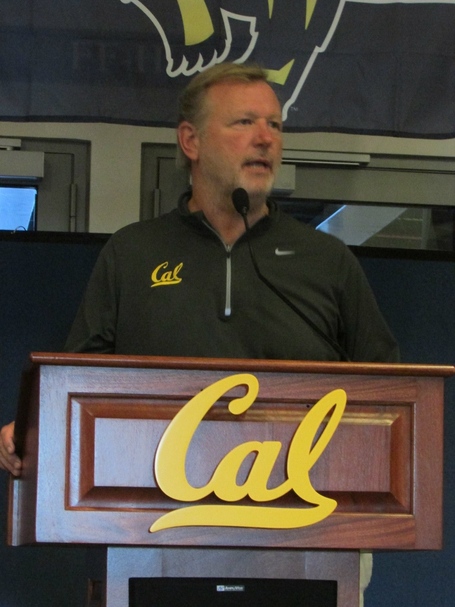 Then, Dykes came back for a Q+A.  He said that that is when it can get "interesting," a knowing comment about how some fan can just go off on him.  No fan went off on him, though.

One fan did ask about how many wins to expect this season, but Dykes dodged that question.  Another fan said how great the players he had met that night were.  This allowed Dykes to talk about the academic improvements so far (3.0 summer GPA) and how the kids were great representatives for the university.

He was asked about NW coach Pat Fitzgerald's comments guaranteeing a win against Cal and Dykes gave a sarcastic answer that seemed to basically say "Whatever."

Dykes talked about how Hardy Nickerson Jr was healing well from a foot injury last year.  He said that Nickerson may be ahead of schedule.  That is promising news.

Dykes also talked about how the SEC did a great job promoting its league.  He said that the 9 conference games for the Pac-12 (coupled with the Pac-12 depth and the strong out of conference scheduling) made it easier for the SEC teams to make the National Championship game. 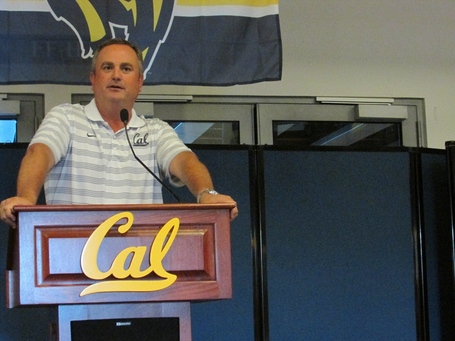 At least one person online disagreed with this assessment:

And with that, the event was over.  I grabbed some more free food for the road and we left with minimal additional substantive information, but a growing optimism that the 2014 season might be slightly less worse than 2013.  GO BEARS!