Is Cal Men's Water Polo back to being NCAA title contender? How will the field-less Cal Field Hockey team survive the 2014 season?

Share All sharing options for: Is Men's Water Polo back to being title contender? Cal Fall Olympics Sports preview

The 2014-15 Cal Athletics season kicked off last weekend with a pair of big wins by Cal Women's Soccer, including a big overtime win at Santa Clara. This weekend, in addition to that game taking place on Saturday in Chicago, the rest of the fall sports also get underway.

Team of the Week:

Cal Women's Soccer - Sure, they are the only team in action, but going a perfect 2-0 including a big road upset win will typically get you this honor.

Meet two of the freshmen starters on the team in Emily Boyd (new starting keeper) and Indigo Gibson (a defender):

No.7 (NSCAA Coaches' poll) Men's Soccer opens the year with an East Coast trip against a pair of the always really tough ACC teams. The Bears will first visit No.22 North Carolina on Friday before taking on No.11 Wake Forest on Sunday.

No.21 (NSCAA Coaches' poll) Women's Soccer is staying in the Bay but playing two matches over in San Francisco. They take on LIU Brooklyn and Portland State.

Volleyball is opening the season in Colorado Springs this weekend for the Air Force Tournament: Live audio for the matches are available online here (CalBears.com).

Field Hockey also opens the season with two "home" matches against Fairfield and Delaware on Friday and Monday. Bears will look to make Stanford field hockey field to be a "Bear Territory".

Continuing my preview of Cal Fall sports (I discussed Women's Soccer last week and Volleyball and Men's Soccer the week before - I've also corrected for my mistake in saying that men's soccer is competing in MPSF when the conference is just known as Pac-12), it's time to look at the last Cal Fall sports squad to have won a national championship (all the way back in 2007, which has been followed by 6 straight USC titles) and the road warriors this season known as Cal Field Hockey.

Even with the expanded NCAA Tournament field, being the clear No.5 team in the country was not good enough for a berth.

Smith, a 2012 first-team All-American, finished his Cal career with 140 goals and had eight goals in the 2013 MPSF Tournament. He joins Cupido as one of two members of the 2013 squad who played in the 2010 NCAA final against USC.

Cupido has been a top all-around player for the Bears ever since his freshman year and finishes with 54 career goals. Gettelfinger has been exceptional the past two seasons, earning honorable mention All-America honors in 2012 and finishing with 64 career goals after scoring five goals in this year’s MPSF Tournament. Goalie Boggan concludes his college career with 245 saves, including 20 saves in the 2013 MPSF Tournament.

There is a conservation of Cupido's for Cal Men's Water Polo!

Everist’s squad will also be welcoming 10 standout freshmen, including Luca Cupido, a 6-4, 190-pound attacker from Santa Margherita Ligure, Italy, and younger brother of Bear standout Giacomo Cupido, who shined for Everist’s squad from 2010-2013.

Here are the Cal Water Polo players celebrating the 1st goal of the season at the Cal Women's Soccer game last Friday. 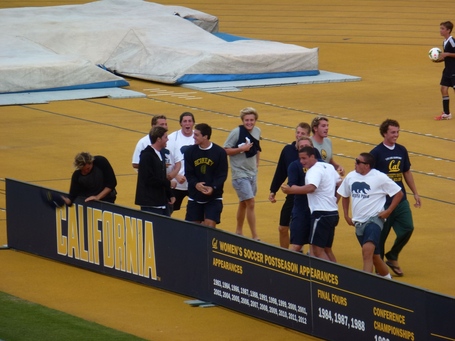 No new CWPA poll released yet

Chance to win the NCAA title:

Best out of all the Cal fall sports. Yes, USC won their 6th straight title last year but they achieved that without being the consensus top team for the bulk of the season. Golden Bears may be a clear notch below the top teams (with their traditional top 4 status supplanted by Pacific), but it would surprise absolute no one if they are back in the mix again.

Chance to win the MPSF:

Before last year, one almost has to win the MPSF tournament to guarantee a spot in the NCAA. With the new expanded field, it has gotten much much easier to make the field as the number of at-large bids went from 1 to 3. With that said, the path to win the MPSF will still be somewhat harder than the task of winning the NCAA tournament.

Chance to beat Stanfurd and when:

Mark your calendar for Big Spike Splash on November 8th in Berkeley. For the first time in a few seasons, the Big Splash will not be taking place in the morning before the Big Game. Cal and Furd will likely play one another in other tournaments. Bears was actually ahead during the first half of the Big Splash last year before faltering (partially due to the lack of depth), with 10 new freshmen ready to make impacts this year, may they provide the difference this time around.

Not so bold prediction:

Bears will beat a higher ranked team this year. It was just bizarre last year how the Bears just could not break through with a win over a top 4 teams (there were a few close losses). You have got to think that Kirk Everist's men will fare better in this regard.

USC will not win the NCAA Championships in 2014. 6 straight times for the Trojans is enough, so I'll take the field. Instead of going undefeated and being very dominant for the entire season, they were good but not great for the entire year in 2013.

If you have not been to the campus for awhile (like me before this past weekend), you might be surprised to see that construction is currently going on at the Maxwell Family Field, the home of Cal Field Hockey.

"When they first talked to me about moving off of Maxwell, of course, I was resistant," says head coach Shellie Onstead, who was an assistant U.S. Olympic coach in 2008, a California Hall of Fame inductee and the first All-American field hockey player for the Bears. "The carrot was, ‘We’re going to build you a proper hockey field.’ I’d never had proper seating or a press box, and it’s never quite been the facility that it should be, like our opponents have, but hey, it was Maxwell and it was a great location. I’m a team player, and I was like, ‘I understand that you guys need the surface, and football needs a practice field.’ I’m not bothered by that.’" Onstead has always had to schedule home weekends and practices around the Fun Zone and football games, which she did for many years, and understood that it was the price she had to pay to have such a great location for the field, though it took five to six home games out of her schedule every season. Now, Onstead leaves at 6 am in the morning to beat traffic down to Palo Alto, and then has to get her young women back to school for class. She has spent the last 10 days down in San Diego with her team, building them into road warriors at the Olympic Training Center (OTC) in Chula Vista, Calif., a facility with which Onstead has had a good relationship due to her history.

While training down in San Diego, the team was able to go take a trip to Petco Park and meet up with Cal alum and 2014 All-Star in Tyson Ross. That's pretty cool.

Bottom line is this, the Bears will be trying to make Stanfurd their home (for not just games but also training every week) all season long. On the bright side, after this season the team will be that much tougher for future seasons with a better facility.