Northwestern. We comin for you, brother.

Share All sharing options for: Northwestern. We comin for you, brother.

Among professional wrestling's many, many signature tropes -- horrendous insensitivity to representations of race and gender, ridiculous stunts and weaponry, so on and so forth -- is the concept of the promo; a segment in which a wrestler advances a story-line or feud by explaining his motivations, putting down the opponent, or presenting oneself as a legitimate threat. Sometimes even accomplishing all three at once.

In what may or may not become a regular part of my Monday column, this is me, remaining as true to pro wrestling style as possible and stepping into a highly exaggerated persona in order to do exactly that, ignoring record, current situation, or otherwise. [It's supposed to be fun, okay? Well, it is for me to write, anyway.]

To all Northwestern bastards and the slimy puddle of classlessness excrement that leads them...

I hope you've caught your breath by now. Done your cardio. Drank your Gatorade. Whatever it takes for you to get through these sixty minutes of blistering, full throttle hell that await you four days from now...

Because if you intend to fall over again on Saturday, gasping and cramping in some ill-conceived and morally dubious attempt to slow our frenzied tempo; if your keys to victory involve another two fluke bounces into the hands of Collin Ellis, then I got news for you, brother.

I wouldn't count on either working a second time.

We are not the 1-11 Cal Bears of yesteryear, no longer the young cubs who could be so easily shaken and screwed over by all that.

For eight months, we've worked, day in and day out, grinding, dreaming of this moment, when we can announce to the world that we've survived rock bottom. That we've made it past all the shit the world threw at us in 2013 -- not just the losing, but the transfers, the NFL departures, the injuries, the tragedies -- and that we've started to claw our way out the other side.

Saturday at 2PM, the whole country will get to see the results of that effort; the consummation of an August vengeance we're finally, finally getting the chance to exact, and while we're still a bit off from Roses -- a program on its way back, not a program that has arrived -- I promise you, I promise you, what's budding, growing here right now is more than enough to handle the likes of you, Northwestern, more than enough to deep (dish) out a can of whoop-ass on you, brother.

We're coming 72 strong, 72 ready, underhanded tactics of yours be damned, 72 Bears seeking vengeance, even if we have to sweep through all of Windy City and tear asunder the dump that is Ryan Field just to get it.

We, of course, includes Bear Raid Commander Jared Goff and his squadron of fleet footed wide receivers, who ran roughshod through your secondary for almost 500 yards last year -- in his FIRST COLLEGE START -- and are on their way to 500 more on Saturday. Get real familiar with the names on the back of those jerseys -- Treggs, Harper, Davis, Harris, Lawler -- because you'll be chasing them from behind oh, I'd say...right after kickoff.

We, of course, includes offensive coordinator Tony Franklin, who, with a second year to work now, is set to unleash The System in its next gear, cranking up the pace all game long until you BEG for us to ease up.

We, of course, includes a rebuilt, revamped line up front, now poised and capable of imposing its will on you on every snap, bullying and mauling you into exhausted submission. Moore. Borrayo. Adcock. Crosthwaite. Rigsbee. Better know those names too.

We, of course, includes all four running backs we'll trot out in rotation, capable of speed, power, shiftiness, and everything in between. Can you say match-up problems?

But we also includes someone else, beyond those I've mentioned, someone you have yet to know, someone who wasn't around last year, and I want to take this time to introduce him to you ahead of the game. I want you to get real familiar with this face, to see it in every waking moment until kickoff, the visage of the man who will, as God as my witness...

BREAK. YOUR. OFFENSE. IN. HALF. 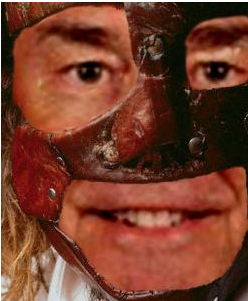 THE PASS RUSHING PSYCHOPATH, THE MONSTER IN MAN COVERAGE, THE DEMON ON DEFENSE

He knows, Northwestern, only three things: re-engineering, re-tinkering, and re-building defenses, on no matter what campus he's called home. He dreams blitzes and spits coverage shells; he breathes unit combinations and blinks up disguised looks. He takes no prisoners, leaves no survivors, this walking irony; his reputation for all three resting on the foundations of the innumerable offensive units he has already claimed victim.

And he's coming for you next.

Your five star Kyle Prater and your Treyvon Greens, your Trevor Semiens and your "super" back Dan Vitale -- it makes no difference who touches or might touch the ball, no difference what threat or threats there might be, Patty. Mrs. Kaufman's baby boy doesn't care. At his hands, whatever wrinkles, whatever plays you feed him on Saturday afternoon matters none, because they and every one else on your offensive two deep, will be reduced to a bruised, quivering heap of grass-smeared ineffectiveness.

That, too, is a promise.

So, here's what going to happen. On Saturday at 2 PM, regardless of rain or shine or whatever other weather condition the football gods deem worthy for us to rematch in, we are going to march into that tiny, unattended dump that you have somehow mistakenly classified as a stadium, and at triple zeroes, we'll be on our way out of there with the win you stole from us last year; post-game handshake optional.