We asked and you answered. Cal fans predict a whopping FIVE wins for the Bears this fall.

A couple weeks ago I asked you all to predict the Bears' chances in each of their games this fall.  Today we enjoy the fruits of your labor.  And it is a bounteous harvest, indeed.  Despite coming off the worst season in school history, we have plenty of optimism heading into 2014.  Andy Buh's reign of terror is over and Jared Goff leads a mostly intact offense under the second year of the Tony Franklin System.  Many expect this to be a breakout year for the Bears and these predictions certainly support those expectations. In fact, we predict an average of FIVE wins!  Let's get right into the results to see how our optimism has grown this offseason.

Inevitably, irrevocably, our win predictions generally increase as the season approaches.  It happens every year between the spring and summer predictions.  The first four games of the season enjoy substantial increases in our win probability.  Northwestern has gone from a slight favorite to a toss-up in our not-so-humble opinions.  Sacramento State has climbed above the 90% mark, which is still a historically low prediction for an FCS team.  We also are more optimistic about our first two conference games.  After that the predictions don't vary too far from our spring predictions.  In fact, we're less optimistic about our chances during the tough, four-game sequence against the Southern California and Oregon schools.  Our predictions for BYU have risen enough to make that our third-most-likely win of the season.  I've said it before and I'll say it again: beware the Stormin' Mormons this season.  That will be a tough test for Kaufman's defense and I am thankful we're facing them at the end of the season.

Despite the increase in optimism, we only favor the Bears in two games.  This means we're going to have to earn three upsets to match the expected number of wins.  Do you see three upsets on the schedule?

In addition to the above table, I have also plotted our chances below.  This allows us to get a better look at the distribution of predictions.  On the x-axis is the likelihood that we will win and on the y-axis is the number of respondents who made that prediction. 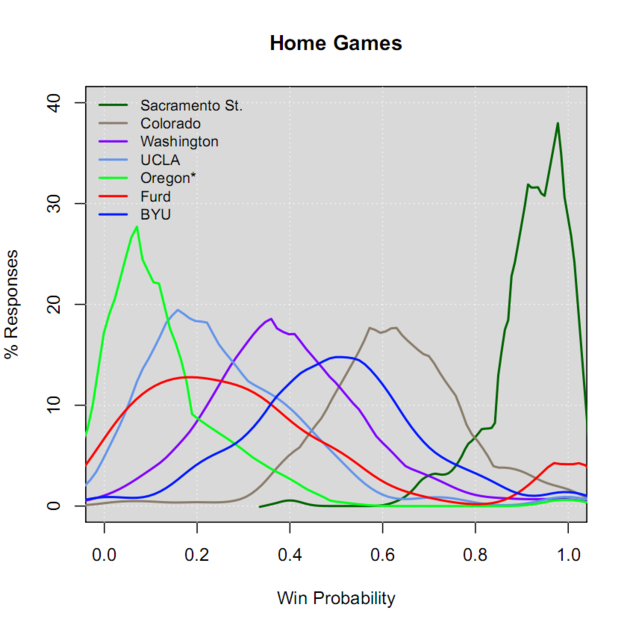 Among our home games we can see a clear ordering in our predictions:  Sacramento State is the likeliest home win, followed by Colorado, then BYU, then Washington.  Stanford and UCLA are about equal, although a small subset of you find a Big Game loss so detestable that you gave Cal a 100% chance of defeating the Lobsterbacks.  Oski smiles upon you.  Finally, our toughest game is the game played in our wonderful stadium that we have spent so much money refurbishing Santa Clara.  Even if the matchup against the Ducks took place at home, that would likely still be our toughest game.

Next let's take a look at the road games.  Only five this season! 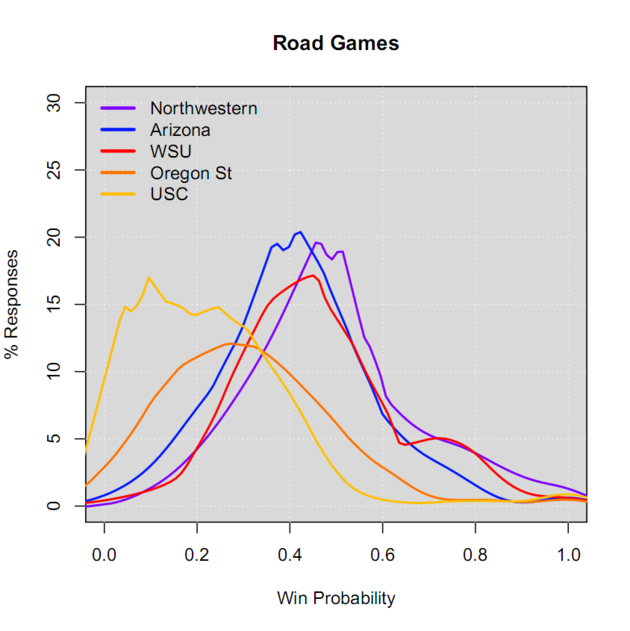 Those Northwestern, Arizona, and Wazzu games all look roughly the same.  Oregon State is our next-toughest game followed by USC.  If the team makes improvements this season, these are all winnable games.  Can you imagine the joy Cal fans would have at sweeping the road slate?  We haven't done that in decades!  It's not likely, but one can dream...

Next I took the predictions from each game and used them to simulate the entire season.  The simulation process is pretty simple.  I select one prediction at random for Northwestern and use that to predict the winner.  If I draw a .65, then the Bears will have a 65% chance of drawing a win.  I then draw either a win or a loss for the Bears, move on to the next game, and repeat the process.  I did this for each of the 12 games to simulate the season and re-ran the process 1,000,000 times.

I have plotted the results below.  On the x-axis we have the number of wins and the y-axis is the probability (per our predictions) of finishing with that number of wins. 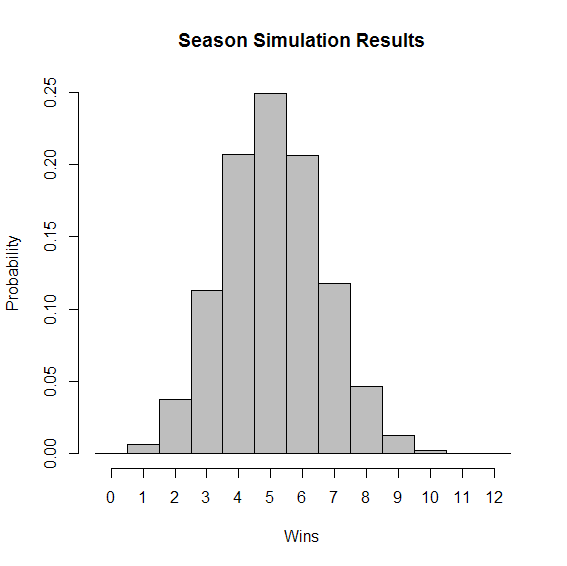 What a wonderfully symmetric distribution.

Five wins is clearly the most likely outcome, followed by four and then six.  Below I list a table with each of the possible number of wins and the likelihood that we will finish with that number.

Looking over those results, I am extremely skeptical that we have a 30% chance of winning 6 or more games and going to a bowl game.  My outlook on the season is considerably dimmer than most of our participants' predictions.  But that's the fun of running this exercise: we all have differing predictions!

Speaking of fun, it's time to hand out some awards.  We begin by awarding the most optimistic among us.

Frankly, I'm a little disappointed.  Usually at least one person gives Cal a perfect 100% chance of winning every single game.  This truly is a dark era in Cal football history.  calbears22 leads the way followed by the very straightforwardly named Fuck you David Sha.  alpha1906 rounds out the top-three with a total prediction of about nine wins.  Remember when 7-8 wins was the norm in these predictions?  Now it qualifies as sunshine pumping.  Hopefully we return to that level in a few years.  Until then, keep fighting the good fight.

From sunshine to eternal darkness, we now reward the most pessimistic among us.

We now recognize the Oldest and Bluest participants.  Somewhat ironically, only one person predicted a season worse than last year's.  That's progress, right?

Finally, we have the most reasonable respondents.

The Voice of Reason

These individuals were the closest to the community average across all 12 predictions.

sup_doe_library is the most rational of all and has an impressive lead over dmoneyfor3 and napabear.  After that, it was a close race between the remaining positions in the top ten.

None of us writers/mods earned an award this time, so I'm recognizing you all with a participant award.  Is there a finer honor? I think not.

I've listed our responses below and organized them from fewest to most wins overall.  We do not have huge differences in our predictions across each game and the difference between the most and least optimistic is only about two games.  Half of us project the Bears to win about five games.

And that wraps up our final round of offseason predictions! We will gather pre-game predictions throughout the year in our weekly report card series.  At long last our speculation can come to an end as we can feast upon some real football on Saturday.  Go Bears!