Get your media guide now!

You can view it in sections here.

As expected, Jared Goff is the cover boy. 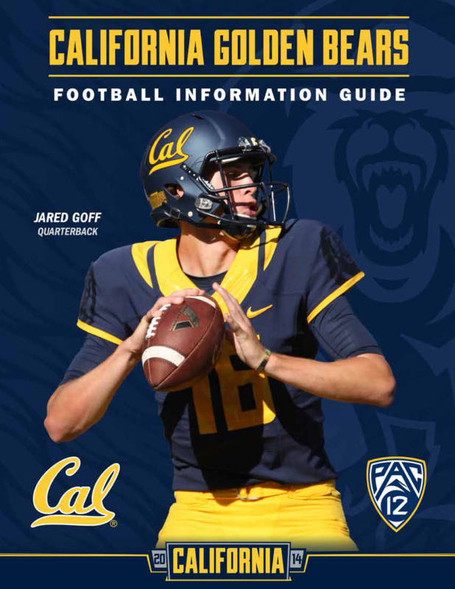 We have some roster updates for you from the cover guide.

You might notice that Darren Ervin is no longer on the roster. That’s because he’s moved up to the coaching ranks. Ervin joins Jahvid Best as a student assistant coach. So I guess we’ll have plenty of running back coaching this season if Pierre Ingram needs it! (Ervin also played some defensive back in high school so maybe he can help out there too).

Speaking of Ingram, he is officially the recruiting coordinator for Cal Athletics. Well-deserved—getting Watson and Enwere after last season does deserve some high honors.

Losses from last year’s team that we might not have mentioned (or might have, I’ve lost track): Ervin, Austin Harper (who performed well in the spring only to fall prey to "Cal football players who play well in the spring disappear in the fall" disease), Isaac Lapite, Adrian Lee, Lucas King, Jordan Morgan and a few others (the full list of departing players is available on Page 4 of your media guide). Plenty of the other losses have been documented.

There are plenty of walk-ons (regular or preferred) that join the new recruiting class. The full list of newcomers can be found on Page 4.

James Looney is mentioned among the newcomers, although his status for the upcoming season still has yet to be determined.

Ted Agu gets a brief mention in departing players. I was expecting maybe a page or something near the front honoring his memory, but it's just a standard biography mentioning his tragic passing. I know, I know, it's a stupid media guide, but it still feels weird seeing him next to Ross Anderson and Mitchel Bartolo (the whole departing players section has a strange feel to it too). 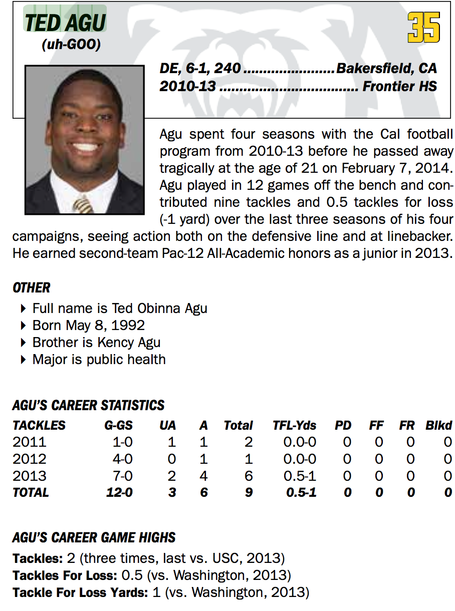