The masses have spoken: Oregon and UCLA are predicted to win their divisions, with the Ducks winning the conference.

Ahead of tomorrow's Pac-12 Media Day, last week I asked you to participate in CGB's Mock Media Poll.  Hundreds and hundreds of you were up to the task and today we reveal the results.  Many thanks to each of you who participated--we appreciate it.  And now, the results:

I have a feeling this will be identical to tomorrow's Pac-12 Media Poll...

First, let's start off in the glorious North, winner of every Pac-12 Championship Game in recorded history.  Below I've listed the final rankings with the number of first-place votes in parentheses.

Despite not winning the division the past two years, Oregon continues to win the North in these polls year after year.  The Lobsterbacks finish second, followed by Chris Petersen and the Huskies.  That's a pretty optimistic prediction for a first-year coach replacing his teams' starting QB, starting RB, and three of its top five pass-catchers from last season.  They also play five conference road games and have to face Stanford and UCLA at home.  Did I mention I'm not optimistic about Washington's chances this season?

Oregon State leads the bottom half of the standings, followed by the Cougs, and, finally, our sturdy Golden Bears.  Despite 28 first-place votes from homers who will remain nameless, Cal still couldn't climb out of the basement in this poll. 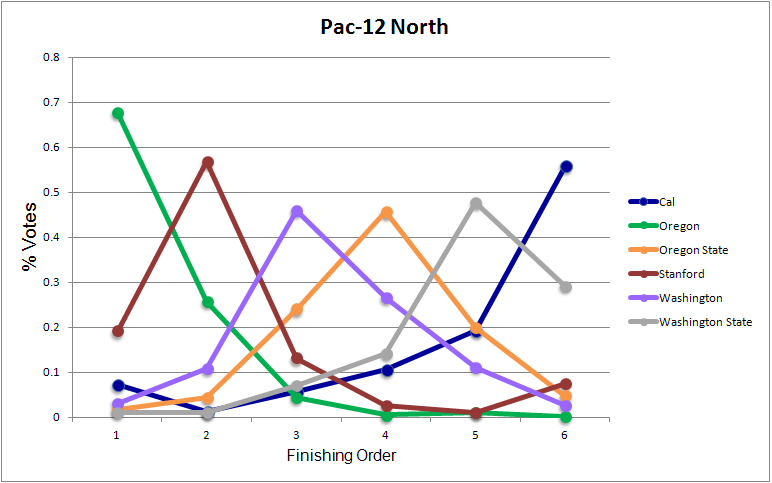 The results are pretty clear, as each team has a distinct peak at its predicted finish.  This suggests that there was a general consensus about where each team would finish (Cal homers notwithstanding).

Now let's have a look at those uncivilized hooligans in the Pac-12 South.

Having earned over 75% of the first-place votes, UCLA is the clear favorite to win the South.  UCLA is well positioned to take advantage of ASU's rebuilding defense and Steve Sarkisian's questionable coaching chops.  Behind UCLA is USC, followed by ASU.  With holes all over its offense, Arizona finishes fourth ahead of Utah and Colorado. 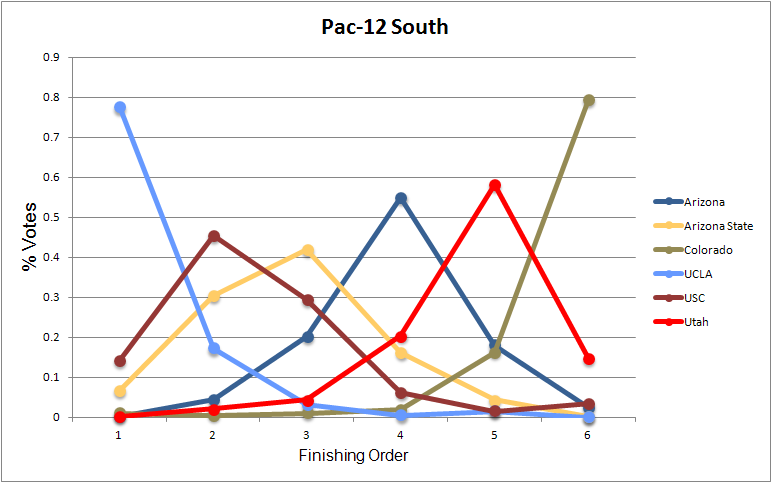 USC and ASU are pretty close but otherwise the rest of the Pac-12 South had a strong consensus.  The votes for first-place and last-place approached unanimity, as about 80% of voters agreed.

In addition to predicting the finishing order for the Pac-12 standings, I also asked participants to pick the winner of the Pac-12 Championship game.

Oregon leads the way with nearly half the votes.  UCLA finishes second, followed by Stanford, and, inexplicably, Cal.  After Stanford, no one else really has a chance to win this, especially not Cal.  I appreciate the unwavering optimism from the lot of you, however.

The results from the real Media Poll should be available sometime around 8:30 or 9am tomorrow.  Again, I expect them to look identical to the results from this poll.  We'll be covering Pac-12 Media Day all day tomorrow, so check back for plenty of coverage from the unofficial kickoff of football preseason.