After a mixup on social media, it looks like the Bears do NOT have a commitment from the former defensive end, but do remain in good standing for his signature.

EDIT: Based on the instagram screenshot below, there was reason to think he had surprise committed, but it looks like we've jumped the gun here. That original photo has been screencapped and is still attached, although he did clarify his status regarding the Bears shortly after. Sorry, Takk! 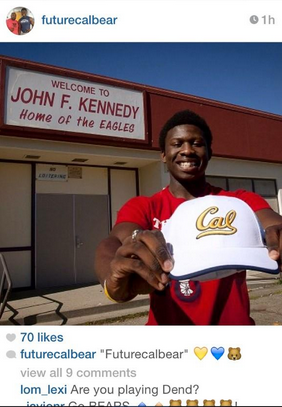 Let's take a trip back to 2013, and remember the story of Bay Area native Takkarist McKinley, who impressed many with his potential and his freakish track-star athleticism trapped in a defensive end's frame, but ultimately missed out on qualifying for Berkeley (by mere points, if I remember correctly).

He spent the last year at Contra Costa College, earning his way back onto the radars of many illustrious programs, including UCLA, Oregon, and Oklahoma. 247sports has him as high as the 2nd JUCO DE in the country, and the pursuit of his talents has certainly been hot.

He only recently announced a Top 6 -- which the Bears are in, along with Oregon, UCLA, and Oklahoma among them -- and whatever the case, he does still seem fond of the Blue and Gold. Plus, note his instagram handle, which remains the same.

I wonder what would I be doing if I was at cal ? pic.twitter.com/nCgwEX1IOF

A big thanks to cyber-sleuth/Cal football player Aaron Cochran for bringing this to our attentions...even though it isn't yet true.