What is this weird feeling?

Share All sharing options for: Let's Enter A Parallel Reality Where The Media Doesn't Blast Cal

I thought of opening this piece with the tagline "May you live in interesting times" as we are living through extremely interesting times when it comes to the Cal Athletic Department. My advanced research (coughwikipediacough) told me that no such Ancient Chinese Proverb ever really existed. I knew I shouldn't have trusted Donna Changstein! CHANGSTEIN!!!!!!!!!

Apparently, the saying is potentially based on the Chinese proverb that tells us that it is better to live as a dog in peace than a man in times of trouble. In that case, sign me up to be a pugapoo, because it'd be an upgrade over these last several years when it comes to the Cal Athletics Department. The Department has had to grapple with truly fundamental problems. Upgrading the Memorial Stadium facility. Potentially cutting several popular sports. Wrestling with the professor revolt against subsidies.

We've talked ad nauseum about AD Sandy Barbour's actions as Director.We talked about the tightrope that any modern Athletic Director has to walk these days to balance all the pressures on the Department. We talked, in specific, about the job that Sandy has done, including what she's done well and what she has not done well.

Overall, given the complicated ballet that these modern day Marie Taglionis have to dance, I think that Sandy has done a pretty good job. Yes, in the negative column, you have the academics issues. However, in the positive column, you have the radical improvements with the stadium that required an above-average level of skill to accomplish. You have the overall success of the Department (football recently excepted). You also have the slow balancing of the budget. The subsidies required from the school continue to decrease, a sign of fiscal strength.

Well, it's time to put this budget rolfing into greater context thanks to this USA Today article about athletic subsidies. It is so rare to see Cal get a good mention in the media. Finally, California Golden Blogs Hall Of Famer Ken Montgomery was happy with a mention of Cal in the media:

Is your school's athletic department as financially responsible as @Cal's? Spoiler altert: no. @USATODAY -http://t.co/MkRoaNz2eE

The article is specifically about Cal's seemingly lonely interest in lowering its subsidy. Cal stands alone as the only school to make substantial decreases to its subsidies:

Just five of the 227 public schools that were in Division I from 2009-10 through 2012-13 have managed to reduce their subsidies for athletics in each of the past three years, a USA TODAY Sports analysis found - Cal, Illinois, Missouri, South Carolina State and Southern Illinois. And Cal was the only one of those five to drop its subsidies by more than $1.2 million during those years.

Valued reader BandAlum has put a chart together outlining the decrease in subsidy.  You can open in a new tab to enlargen it. 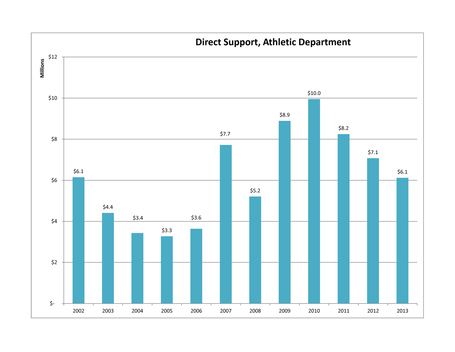 Some people may argue that to even have a subsidy is disastrous. Those aren't so-called weasel words, you can find the Barskys of the world proclaiming their views to the media every hour on the hour. If Jon Wilner hasn't written some sort of anti-Cal screed by 4 PM on any given day, call his house to make sure he is OK. The reality, however, is that of the 227 schools, only a small handful do not need help from their school:

From 2009-10 through 2012-13, there were seven public schools that received no subsidy money in any of those four years: LSU, Nebraska, Ohio State, Oklahoma, Penn State, Purdue, Texas. All are members of one of the six elite conferences - the Atlantic Coast, Big 12, Big East, Big Ten, Pacific-12 and Southeastern .

All of those, save for Purdue, are football blue bloods that have a license to mint money. If you scroll down to the Protest At Cal section of that article, it actually does a phenomenal job of contextualizing what Cal has done and needs to do to make itself as financially secure as possible.

However, Cal's athletics program did start becoming like many others in undertaking business deals the school never had seen before: Selling long-term seat licenses for premium locations in the stadium; negotiating a naming rights contract for the stadium's field; hiring an outside company to help design the seat license program and then adding 15 people to its in-house sales and service staff; leasing space in the stadium to other campus units.

Still other unprecedented moves have come more recently: contracts to host a soccer match between European club powers Real Madrid and Inter Milan on July 26 and moving a home football game this season against Oregon from Memorial Stadium to the San Francisco 49ers' new Levi's Stadium; allowing weddings and other special events to be held in the stadium

Additionally, USA Today also provides a sortable chart regarding schools, their revenue, their expenses, their subsidies etc etc. If you look at Cal on there, they have the following information:

So, under that chart Cal made about 94mil in revenues, had 90mil in expenses and received a 7.5 mil subsidy. What is interesting there is that the subsidy is listed as 8.01% (of revenue). However, according to the article, in 2012-2013, Cal actually made 86.9mil, so the 94mil must include the subsidy.

Presumably, USA Today gets its numbers from Cal, but Cal is providing two separate numbers for the FY13 subsidy. This is somewhat confusing. We'll dive into the FY13 numbers in a future post. I have a post in the can on that. If you love math, sports, and finances, this is the place for you!

Either way, it's great to see Cal get some gold-star publicity. It seems rare doesn't it? I have a post in the can about Cal's approach to the media and what could be done to improve that. Keep an eye out for that upcoming.

Why do you think Cal is the only school truly focused on lowering its subsidy? Is the subsidy an important issue for you? Do you think that it is OK to have a subsidy considering all the value athletics brings to the school? Tell us your thoughts in the comments!