How does the California Golden Blogs community think the Bears will fare this fall?

Jared Goff has returned to the field, the placekicking carousel has begun, and, most importantly, Andy Buh is far away from the football field.  That's right, spring practice has ended, but not before giving us a glimpse of what to expect from the Bears.  Our opponents have also learned a bit about themselves too.  Although early in the year, we can begin to develop a basic understanding of what to expect from ourselves and our enemies.

A couple weeks ago I asked that you all put this new knowledge to good use by predicting Cal's chances against its opponents this season.  I thank each of the 400+ of you who participated.  While our football team has failed to meet expectations for several years, I'm pleased that we have such a vibrant, lively community during these dark times.  This community is what makes these exercises such fun year after year.

In case you missed out (and, let me tell you, you certainly missed out), I asked participants to give the probability that Cal will beat each of its opponents: everyone from Sacramento State to Washington State to Oregon.  I've rounded up the results and turned them into delicious morsels of knowledge.  Now let us feast.

Below I've listed the results in a table.  The left column lists the opponent, with the last row showing the total number of wins.  The middle column represents the average win prediction from the entire population of predictions.  The column on the right lists the standard deviation, which you may remember from stats 2 as a measure of uncertainty.  Where we have large standard deviations, we have high uncertainty about the outcome of the game.

One of the most striking results is that we're only favored in two games, Sacramento State and Colorado.  Those two appear to be our likeliest wins.  Fortunately we have a decent shot at an upset in many of our games, as there are several where our chances range from 35% to 50%.  Our toughest games, however, appear to be against UCLA, Oregon, Oregon State, USC, and stanfurd.  With the five toughest games occurring on consecutive weekends, the second half the season could get ugly.

Looking at the standard deviations, we aren't too certain what will happen in Evanston on August 30th (other than an outbreak of debilitating cramps).  The USC game also has one of the larger standard deviations.  We seem split on whether USC will return to greatness our continue to be mediocre under Sarkisian's leadership.  Of course, the Big Game has the highest standard deviation because a large contingent of the predictions gave Cal a 100% chance of winning.  Oski bless you.

Adding up the predictions across each participant, the average number of projected wins is 4.8.  That would be a great bounce back from last year's fiasco.  We've won 4 games in the last two seasons; I'll happily take 4 in a single season.

In case charts of numbers aren't your forte, I've plotted the predictions below.  First we'll take a look at the home games.  In the following charts I've plotted everyone's predictions.  On the X-axis is the chance that Cal wins and on the Y-axis is the percentage of people who made that prediction.  I've color-coded the responses by team; see the legend in the top left. 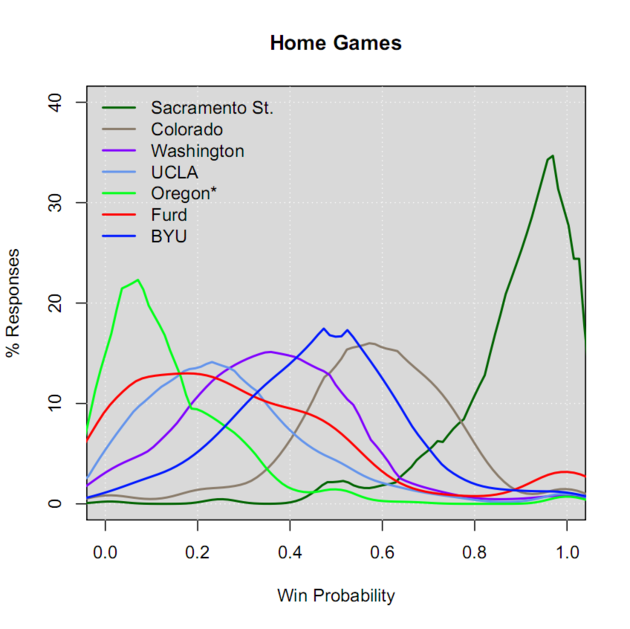 *Oregon to be played at a neutral site: Levi's Stadium

Sacramento State is clearly our likeliest win (big surprise!), with most of us giving us an 80% to 100% chance of defeating the Hornets.  The next-best chance of winning is against Colorado.  Yes, the same Colorado that embarrassed us 42-24 last season (I remember that game being much, much worse than the score indicates).  The Stormin' Mormons of BYU are the next-easiest foe.  The rest of the home games look particularly challenging.

Also, note the little bump around 1.0 for the Big Game predictions.  Kudos to those of you who made that possible.

Next up are our road foes. 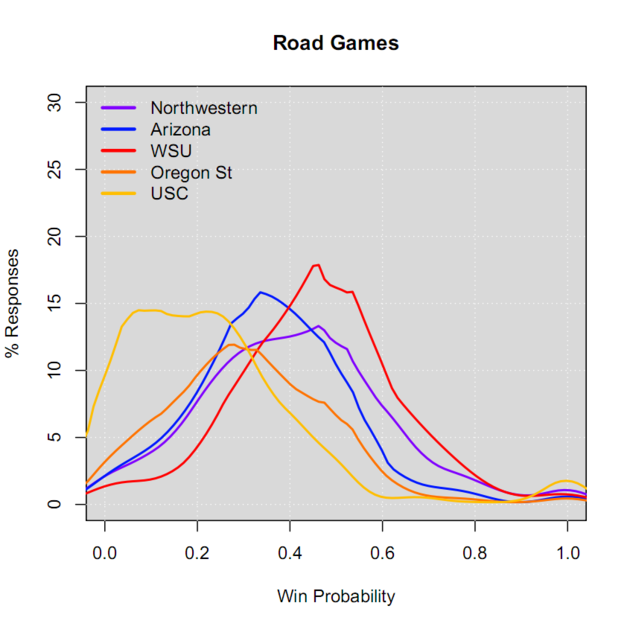 I'm not particularly optimistic about any of these games.  Although the consensus suggests that Wazzu is our easiest road game, I think Arizona might be our best chance of a road victory.  RichRod's offense will be replacing BJ Denker and Kadeem Carey.  We face them on the third week of the season, when they may still be breaking in the playmakers.  After that, things look pretty tough.  Good thing we only have five road games.

I used the results to simulate the season 1,000,000 times.  If you want to know how the simulations work, ask in the comments.  Otherwise, let's get to the results. 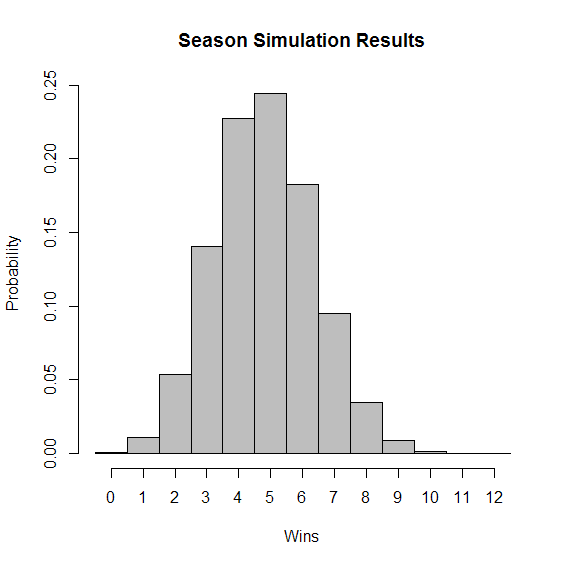 A 5-win season is the most likely outcome, followed closely by a 4-win season.  The optimists among us will be pleased to see that we have a roughly 30% chance of earning enough wins to get to a bowl game.  We even have an outside short at going 12-0!

Now let's hand out some awards to those of you who participated.

Our first award goes to the most optimistic among us.

Three of you gave us a 100% chance of beating every opponent.  Keep on pumping that sunshine!

At the opposite end of the spectrum we have the most pessimistic among us.  Fortunately, only 2 of the 400+ predictions thought we would do worse than we did last season.

The Voice of Reason

Finally we have those of you whose predictions were closest to the community average.

We have one last set of predictions we wanted to highlight, those from your beloved writers/mods at CGB!  We have them ordered from most optimistic to least optimistic.

Our projections have us earning between 3 and 6 wins, with the average being about 4.7.  Our predictions don't vary too much from person to person, but the BYU game stands out as one where we have some big differences in our predictions.  Several of us had Cal as moderate favorites while others believe BYU should be favored strongly.  Perhaps this is because we are more familar with our Pac-12 foes than the Cougars.

Once again, I'd like to thank everyone for participating!  We'll do this again during fall camp and we hope you'll participate again! Go Bears!