Both of today's candidates scored upsets in the first round. Will Murray pull another improbable upset or will Shaw advance to the next round? Check out the most recently updated bracket here.

The best scorer I've ever seen at Cal - and I saw Ed Gray, Sean Lampley and ‘Reef play. Effortless, smooth jump shots, making 3s from all over, Mid range. Also had to play out of position at power forward due to Al Grigsby's (multiple) injuries. Buttery smooth left handed jumper. Led the Pac-10 in scoring (and maybe rebounding) one year. Of course, wasn't Pac 10 Player of the year due to another Cal player (um, Jason Kidd)

He did have a productive NBA career, but was unfortunate to be drafted by the Clippers and hence spend most of his pro time in relative obscurity. It would not be a huge stretch to consider him one of the top ten Clippers ever. Nice tidbit: Teamed up with Kidd in New Jersey in his final season in the league.

And check out this unbelievable alley oop dunk from Jason Kidd: 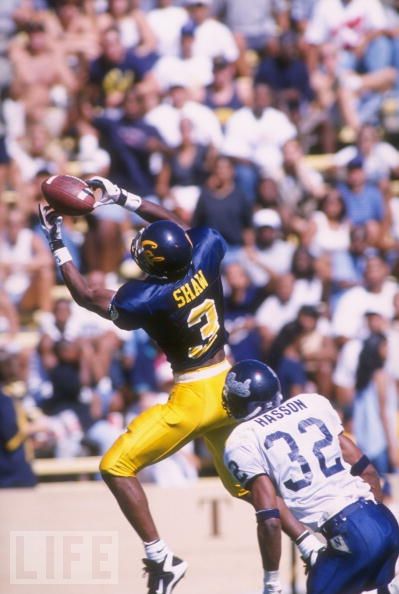 Unclesam22: Bobby Shaw left Cal as the school's all-time leader in receptions with 180 catches for 2,731 yards and 27 touchdowns, and was an offensive star during some lean Cal football years.

In 1996, Shaw turned in some big performances, with 12 catches for 168 yards in a game against UCLA and three touchdown scores in a 48-42 triple-overtime win over Oregon State. In that year's Aloha Bowl, Shaw scored twice on passes from Pat Barnes in Cal's 42-38 loss to the Navy. Shaw was named first-team All-Pac 10 for his performance that year.

In 1997, Shaw became captain and set single-season records with 74 receptions for 1,093 yards and 11 touchdowns. Cal only won 3 games but Shaw led them to one victory with 158 yards and 2 touchdowns in a 40-36 win over Oklahoma. He was again voted to the All-Pac 10 first team, and became the third Cal wide receiver to win first-team All-America honors from Sporting News.

Shaw was drafted in the 6th round by Seattle in 1998. He signed later that year with the Pittsburgh Steelers, and played five productive years with the Steelers, Jaguars and Bills.

CruzinBears: Personal Note: Bobby Shaw was an outstanding receiver for Cal during the dark dank cold era they call the late 90's, fan favorite (or at least for me as a kid) and the first Cal Bear I know to have a rap song about him... Later followed by Leon Powe (Mistah FAB) and of course Marshawn Lynch (Cataracts)...