Jacobi Hunter not returning to the Cal football program, per his Twitter

This is the second consecutive day that your day starts with bad roster news. Sorry.

Share All sharing options for: Jacobi Hunter not returning to the Cal football program, per his Twitter

We all feared this back in March, but now we can live in a world where those fears have been actualized -- yay -- sophomore defensive tackle Jacobi Hunter will not be returning to the team, if the information per his own Twitter profile is to be believed. Instead, Hunter will be at Sam Houston State with a different Bears team: that is to say, the Bearkats, instead.

(Big thanks to @albnomaam/Al B. on Twitter for catching this.) 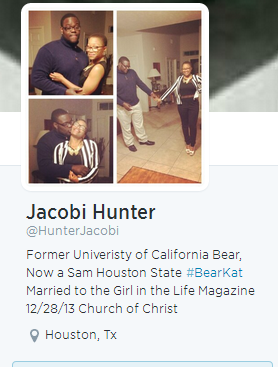 Details on the situation remain murky, but Hunter had missed most of spring ball with "personal issues" that were relatively unelaborated on. [It would be irresponsible to speculate anyway, so let's try our best to avoid doing so and respect the outcome, whether it was by his decision, or the program's.]

From a strictly football standpoint, though, this is close to disastrous, as it ensures that no matter which defensive tackle combination lines up for the Bears this season -- whether that's a mix of Trevor Kelly, Harrison Wilfley, Marcus Manley, or whoever -- there will be less experience at defensive line than ideally preferred. Most end-of-season predictions felt good about the near future at the position, but that was under the assumption that Viliami Moala, who was finally showing flashes of becoming the player we'd hoped, and Hunter, a training camp surprise last fall, would both be returning.

That does not, however, mean that the team was caught off-guard by Hunter's departure; in a way, it seems that they had been preparing for it all along, having adding two players at his position in the incoming Chris Palmer and Wake Forest transfer James Looney. Time will tell if they are able to see the field or effectively shore up the depth at tackle, but there it is. Out go Moala and Hunter; in go Palmer and Looney.

Best of luck to Jacobi, and of course, wishes for great happiness in his marriage.