What Is Your Vision Of The Athletics Department?

Do you have the vision?

Share All sharing options for: What Is Your Vision Of The Athletics Department?

The Cal Athletics Department is currently stuck in a no man's land, tugged between two disparate forces that mean well, but combined could cause massive harm for the department. This sounds like an overstatement, but we all know the concern of the massive 400+ million dollars worth of debt the Department/Regents took on for the Memorial Stadium Upgrade. We've discussed it in many places (summarized here).

The bottom line is that going forward, the Athletic Director (be it Sandy or otherwise) will have to navigate these two competing forces to provide for the best Athletics program possible for our lovely alma mater. What are these two different sets of pressures? Financial pressures and community pressures. The financials pressures want Sandy to run the Department as a business. The community pressure want Sandy to run the Department like a non-profit community organization. These two pressures are, in many ways, mutually exclusive, creating a tightrope situation for Sandy. Try to appease one side and you'll piss off the other.

There are a lot of financial pressures that are being placed on the Department. Sandy is essentially the CEO of a multi-million dollar quasi-public, quasi-private business. She has a responsibility to run the business to the best of her ability and for the good of the campus, but also to make a profit, if possible. Right now, there is intense pressure on her to make as much of a profit as possible.

The financial pressure stems mostly from divestment in public education by the state in the last several years. UC Berkeley itself is trying to cut costs wherever possible and has pushed that ethos onto the Department. If you want hard numbers, here they are (this is Vice Chancellor John Wilton speaking about the change in state funding from 2002-2003 to 2012-2013):

"Most noticeably, state appropriations declined from about 34% of total revenue in 2002-03 to about 13% in 2012-13. In absolute dollars, state appropriations declined from about $497 million to $290 over the decade, a decline of about 42% in nominal terms or 54% in real terms (i.e., after adjusting for inflation). By contrast, the other three revenue sources have all increased - to the point where each is significantly more important than state funding. Clearly, Berkeley is a not a publicly funded university if one means that the university derives the majority of its funding from the state budget. This has not been the case for many years."

We're talking about over 50% of Cal's overall revenue from the state disappearing in 10 years! That is massive and the sea changes that that will bring about cannot be overstated. The effects trickle down from the school to the Department. For example, the professors mutinied against the Department.  Many professors openly voiced their displeasure with the fact that UC Berkeley was providing millions of dollars a year to the Athletics Department.

Now, the reality is that all but 7 athletic programs in the nation receive some sort of subsidy, so Cal is not some oddity.  However, given the budget situation in Sacramento etc etc, Sandy has had to tighten the Department's belt substantially in the last several years or face a politically untenable situation. This is not necessarily a bad thing as a smart focus on cost-effectiveness is prudent, no matter what. But it is an example of the financial pressure being placed upon the Department.

How have these financial pressures affected the Department?  An analysis by Vice Chancellor John Wilton shows where the finances are right now.

"Now let's turn to consider how this program is financed. In FY 2012-13, IA's total budget was about $91 million, inclusive of all expenses: operating and debt service, including the new facilities - everything. Of this, IA raised about $83.5 million itself (through ticket sales, philanthropy, media revenue, etc.), while total campus support was $7.5 million (institutional support contributing $6.1 million and student fees $1.4 million). Thus, in FY 2012-13 IA generated 91.8 percent of the revenue required to cover its costs, with the university providing 8.2 percent. As shown in the table below, this is well below the 16-17 percent level of a few years ago, and the objective is to reduce this further to about $5 million this year."

The disinvestment has forced the Department to slim down. They are doing that well and decreasing the direct institutional support as required by UC Berkeley. Those numbers at the end are slightly inaccurate, because UC Berkeley taxes the Department and takes money back from the Department. For fiscal year 2014, that support (money from UC Berkeley to the Department minus money back) is projected to be down to $2 million. That is down from a high of $10 million in FY 2009.

That is the financial side of the coin. The department technically does not make enough money to support itself, but is very close to doing so. There has been increased pressure given the historic budget crisis of the last several years that has put Cal in a position where even "modest improvements" is not enough. People from Jon Wilner to Computer Science Professor Brian Barsky continue to complain that UC Berkeley is subsidizing the Department too much, demanding the complete decrease of institutional support.

The other aspect to this story are the community forces at play. In this group, people are all fine with being cost-effective, but wouldn't want that to limit the ability to provide a community for Cal students, athletes, and alums. They feel that it is appropriate for UC Berkeley to provide a subsidy, because Athletics provides so much back (spirit, donations, diversity etc etc). I fall into this group. This all sounds well and good, but it soon runs up against the financial pressures. What do I mean by that? Let's look at the numbers.

Sandy runs this business and it has basically 29 products (i.e. the 29 Cal sports). They make money by selling various things related to those products (tickets, media rights, apparel etc etc). The problem is that only 2 of those 29 products make money. If you were running a business and 27 of your 29 products were money losers, you'd dump most, if not all, of those products. You'd focus all of your energy on your two fiscally successful products and you'd make a killing.  Here is a chart reflecting that.  Click to embiggen. 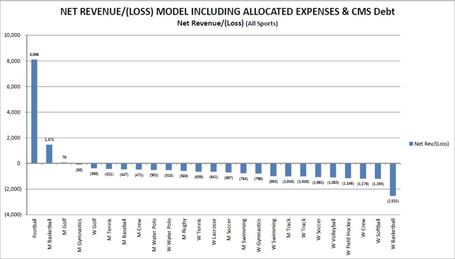 OK, I lied, there are 3 money making products insomuch as men's golf makes $70K a year. That is impressive, but a drop in the bucket. If you look at that chart, 9 out of the 10 biggest money losers are women's sports. I discussed this issue in a previous post.

I could keep crunching the numbers, but the bottom line is the same. And it's exactly what you would have guessed coming into this post: Not only is Women's Basketball losing a substantial sum of money, all women's sports combined lose millions. By my calculations, women's sports at Cal lost approximately $7 mil in FY2012. At Oregon, it was $11 mil in 2012. Perhaps there are a few places where WBB makes money, like Stanford, UConn, or Tennessee, but those are the exceptions to the rule.

From a fiscal perspective, women's sports are financially non-viable. If Sandy were to cut all women's sports, her Direct Institutional Support problem would immediately disappear. Heck, cutting Women's Basketball could do it. That would get the professors etc off of her back. I'm not here to pick on women's basketball (of which I'm a huge fan!) or other women's sports. Most men's sports are in the exact same boat, too, even if not quite at the same level. However, there are community forces that are either legal or societal in nature that preclude Sandy from cutting many of these sports.

People believe that the Department should stand for more than just dollars and cents. It should try to provide as much athletic opportunity for all, male or female. Merely because women's sports are not financially viable does not mean that there are not passionate fanbases ready to cheer them on or that they lack value for the campus community as a whole. Women's basketball, despite the fact it loses the most of all sports at Cal, has a massive diehard fanbase that would revolt if Cal tried to cut it.

We saw what happened in 2010 when Sandy proposed cutting sports. People flipped out. There was validity to their outrage, for sure, but the bottom line is that no matter how often you pointed at profit and loss statements, people are just plain not willing to accept cutting sports. It is, in their view, against the spirit of the program.

Both the Pac-12 and the NCAA provide regulations requiring certain sports.

Number of required sports: Division I members must offer at least 14 sports (at least seven for men and seven for women, or six for men and eight for women). The institution must sponsor at least two team sports (for example, football, basketball or volleyball) for each gender. The school also must have participating male and female teams or participants in the fall, winter and spring seasons.

So, even if Sandy wanted to cut sports down, she'd have to have at least 14 sports. She could, in theory, cut 15 sports, which would alleviate the financial problems. She would still be left with many-money losing sports, including women's basketball.

Title IX is a well known federal regulation protecting the interests of female athletes. It was designed given that female athletics are generally not viable financially. It limits the abilities of Athletic Departments to cut female sports or diminish opportunities for female athletes. What that means is pragmatically if Sandy wanted to cut sports, she'd have to focus on male sports. That would still leave the increased money-losing female sports. You could cut 5 men's sports and still not match the $2.5 million lost by women's basketball.

All three of these community forces are reasons why Sandy can't just cut her way to financial success.

There are two competing visions of the Athletics Department. On one extreme, you have financial pressures demanding that the Department run like a standard profit-oriented business. On the other extreme, you have a focus on creating an athletics community that benefits the school even if it loses money on many sports. Balancing these two visions is difficult. In Wilton's piece, he says that it would be impossible for the Department to be financially profitable while also maintaining all sports. I disagree. If we are only $2 million away from breaking even, then that is within sight. The Kabam deal is worth $1.2 million a year, so that's a huge chunk of that $2 million gobbled up quick!

I also feel that the value of a successful Athletics Department is huge for the campus as a whole. It increases school pride. It increases donations to academics (Wilton's athletics piece notes how many of the biggest donors to academics also donate to athletics, so they are intertwined). Since private donations are becoming a larger role in UC Berkeley revenue after the disinvestment, anything that can be done to ensure those donations seems key to me. In my mind, even if the school has to send a few million to the Department each year, ensuring a successful Department is worth every penny.

Additional cuts would not necessarily clean out "administrative bloat," but would start to cut into athletic opportunities themselves. The athletes are just pawns, caught up in between these two sets of forces, it would be unfortunate if their opportunities were limited in resolving this whole mess.

But enough about me. What is your vision for the Athletics Department? Tell us in the comments!