In which we look at the tape. The tape never lies.

On Monday, I shared my general thoughts on the Cal Football Spring Experience. Today, I have a limited breakdown of some game film, starting with a play featuring one Trevor Kelly. [Please click on all photos for a better look.]

Most people (me included) were surprised -- disappointed, even -- to find out that our prized mid-year transfer did not win the defensive tackle job coming out of spring, but I suspect that it wasn't due entirely to his play; Sonny alluded to his weight being an issue in some of the post-practice interviews. I still think he's eventually going to start, though, and this play below is part of why.

This sequence, which I call A Destruction In Three Acts, begins with Trevor Kelly lined up as a 1-technique, right in the A gap between Jordan Rigsbee and Alejandro Crosthwaite.

I've circled him in red. Notice that he is lined up at the 20 yard line. 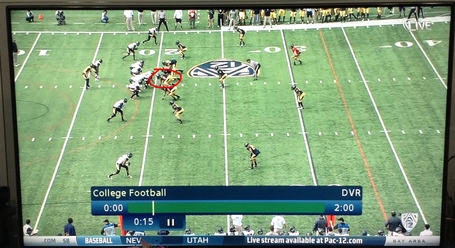 Act II: look at what happens to Rigsbee, trying to block him one on one. They're now at the 18 yard line, right as Coprich is taking his carry. 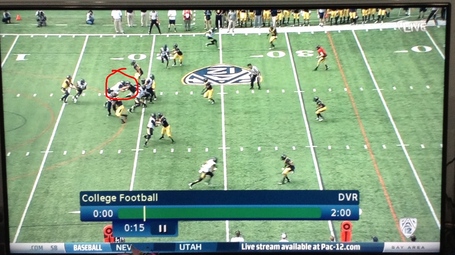 Act III: Yep...and now they're at the 17, as Kelly gets the tackle by himself. That's right. Kelly pushed the center back three yards, then made the tackle singlehandedly. If he could get in the proper shape to do this consistently -- down from 315 pounds to a relatively svelte 300 -- we might really have something. Not a lot of other guys on this roster are capable of such monstrous strength...

...in fact, none of them are. If I remember correctly, he already broke all the lifting records as soon as he got here. 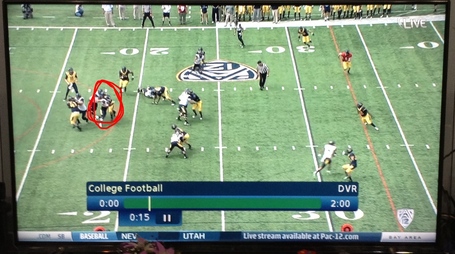 That play by Kelly was only the first thing I wanted to point out, though. The rest of this column will focus in on some schematic wrinkles, and three plays in particular, broken down to the best that my amateur knowledge will allow. These changes are subtle, of course, but new, just like I had hoped last season:

Now, I believe Tony Franklin is correct when he says The System can be installed in three days. But repetition, mastery and additional twists? Those will keep coming. We're seeing them right now, and I'd be surprised if the offense isn't more varied in its packaging/deployment next season, although the shell of it is probably going to be the same.

I love tracking stuff like this and trying to make sense of/interpret it the most. Again, please click on the photos for a better visual.

There were some more trips sets and some increased usage of wide receiver motion, but the first noticeable wrinkle at the scrimmage to me was the usage of running back motion, which I don't think occurred last year. What do I mean? See my crappily drawn illustration below. 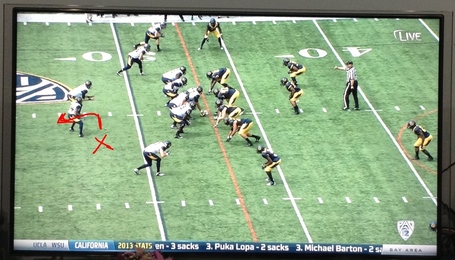 Harper initially lines up side by side with Hinder, but drops back to a position about a yard behind him, when he takes the handoff. It's not 100% evident in these photos, but there is motion -- the next play I write up will show it a bit more clearly. Moving the back around like this gives the look and threat of an inside zone read, which would be even more convincing if/once we have a run threat back at quarterback.

While Harper meets at the mesh point, Hinder's primary assigment is to look at the slot corner, Darius Allensworth (red), and determine what it is he's doing. If Allensworth attacks the handoff or blitzes off the edge, it looks like Hinder is supposed throw it right behind him to Ray Hudson, running a little curl. It's almost exactly like the stick-draw concept written about here.

Allensworth, however, remains with the receiver, meaning that the correct play is to hand off. Hinder does. 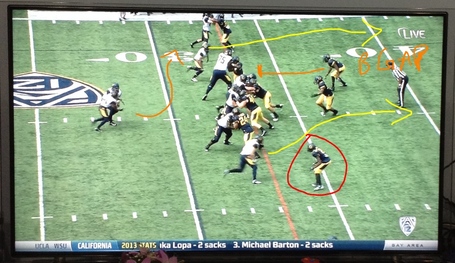 Let's move to the second portion of the play, which involves Ray Davison (orange). I wrote yesterday that I felt he played well, and what you'll see here is part of why I called him a strong performer -- after reading run, he steps into the B gap, and forces Harper to take the carry outside, rather than north...then ends up eventually making the tackle on Harper anyway. He ended up leading the team in that category, and more impressively, looked fairly comfortable running around for a guy originally projected to play defensive end. 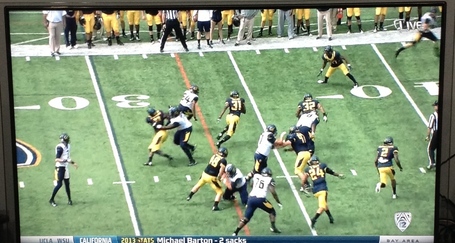 Let's take a look at a similar concept, which happened in the second half with Goff under center this time. Here's the initial look, with the running back again side by side. 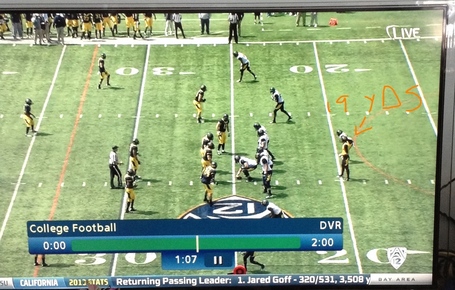 But after Coprich steps back to take the zone-read type handoff, the read isn't of the slot corner, but of the mike, who I think might be Edward Tandy here, circled in blue. Tandy steps up, which indicates that they should throw... 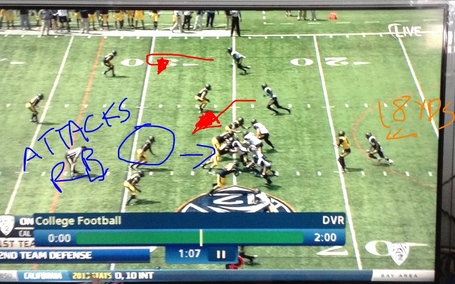 ...so Goff does. Kenny Lawler takes advantage of the cushion being afforded to him with a curl route, and Goff completing those yards for an easy gain. Bam. Easy. 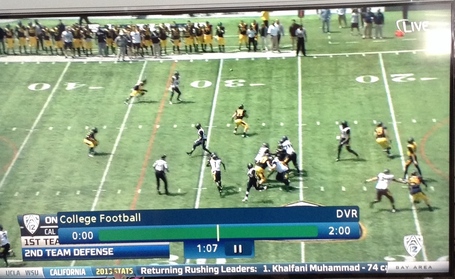 Don't equate easy with bad, though. These kinds of easy plays, done over and over to a tiring defense, puts them in situations where they -- theoretically -- choose wrong every time, while also increasing stress on them to tackle in space. As soon as they start to miss, or slip...BOOM.

Don't worry, we're not playing Nevada...yet. But yes, pistols were in attendance, and apparently in the playbook. Take a look at what's below. 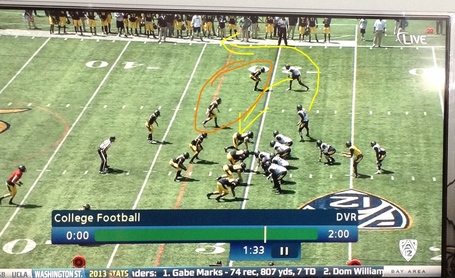 The team's lined up in I guess you'd call it a slight-offset pistol look, with Stephen Anderson stationed in the slot. He has just finished running a partial motion, settling in at the position you see here. The route concept in yellow is designed for him to run the wheel, while the outside receiver runs a bit of a slant/drag. Anderson is pretty much the primary receiver the whole way, I think -- this combination is intended for the two defensive backs (orange) to get caught up in traffic, to get them to run into each other either trying to defend Anderson's wheel route, or the slant/cross.

That's exactly what you'll see in the shot below, allowing Goff to hit his target for a nice completion, made even sweeter by Anderson's run after the catch. 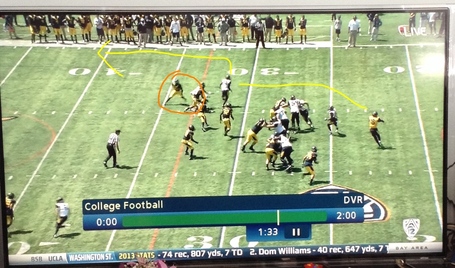 The team also showed pistol with a full field motion, too, bringing Stephen Anderson to the other side of the formation for run blocking, although Maximo Espitia ended up unblocked and making a tackle for loss on this one. I'm not entirely sure why that happened, but my guess is that someone missed an assignment after Stephen Anderson went in motion; either right guard Alejandro Crosthwaite was supposed to help on the defensive tackle only temporarily, and then pick up the blitzing linebacker, or Brian Farley was supposed to adjust and take responsibility for Espitia, passing off the end for Crosthwaite. Either way, he ends up not getting picked up, allowing him to knife through and get a tackle for loss for his efforts. 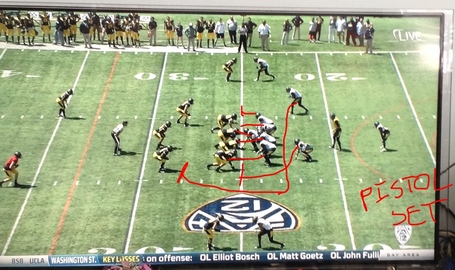 As to why the Pistol package? Well, this formation already offers plenty of schematic advantages to start with -- one, it allows for backs to get a head of steam heading down hill rushing the ball, and two, it gives the quarterback an extended view of the defense. Now, in the traditional shotgun formation, the latter exists, but former doesn't, largely negated because the running back takes the ball just a yard's head start -- or sometimes none -- rather than the 2-3 seen here.

Obviously I'm not Tony Franklin, but I'd also guess that we've incorporated the Pistol for reasons beyond that too, seeing as it offers us some great schematic flexibility overall. It all starts with how teams declare or define Mr. Lucas Gingold:

When you combine this with a scheme that stresses maximum no huddle, you have a personnel package that can stay out there in spurts, regardless of it is Coach Franklin wants to do, whether that's smashmouth ball or attack deep. Because they can do it all, they won't need to substitute...and so the defense can't either. That kind of thing wears on teams, fatiguing them ever faster.

In future years, this BONE slot might be filled with a player more athletic and versatile than Gingold (with all due respect to his efforts), which would open things up even further. Perhaps John Porchivina, even.

Heading into the fall...

Coach Dykes said after the game he saw a long way to go. That much is very, very clear, but if you think about it -- and I mean, really think about it -- it's hard to argue that this team won't be better this fall.

Pretty much the entire offense is returning a year older. Defensively, our first look at Kaufman's crew gave some hope, showing much more in the way of fundamentals and general solidness than Buh did. Combine that with a soft early schedule, some almost assured injury regression, plus the fact that most of the tougher games will be at home, and there should be improvement. Many of these things were on display already on Saturday. We just don't quite know how much improvement there will be yet, especially with how many players have really yet to debut. Will Sam Atoe take over a starting spot? Will Darius White? How about freshmen? How about Jacobi Hunter? Is he coming back?

Really, four wins seems like a realistic projection -- Scott sees 5 -- although how the team handles the Northwestern-Sac State-Arizona stretch will be a huge x-factor in that. I do see a bowl berth being possible only if everything breaks right. No crazy injuries, a team that gets off to a 3-2 start, developing confidence in itself...well, at that point, with this receiving group, who knows?

Though I have long believed -- and still believe -- that '15 will be the true test for Sonny and company, fall camp will certainly be interesting, and as of now, I do plan on being here to continue covering it for you all. It will probably be the camp I am fully available for.

Well, I guess that's it for thoughts I had about this one...now we crawl back into the miserable existence that we live when football is out of season. August 30th can't come soon enough. Go Bears.

Cal spring football 2014: California Golden Bears need to get better in a hurry