No.1 Golden Bears host the visiting No.8 Central Washington Wildcats this afternoon in the Varsity Cup National Championship semifinal. Can the Bears make a return to the Varsity Cup final (next week in Salt Lake City)?

The Golden Bears will look to take one step closer to winning their first Varsity Cup National Championship when they host the Central Washington Wildcats in a semifinal game this afternoon. The 8th ranked CWU narrowly defeated Utah last week to advance to the semifinal. For the top ranked Cal, the Bears took care of business against UCLA on UCLA's home field last week.

I don't know that much about "Central" other than their undefeated record and their choice to wear red. We all know how the color red make the Golden Bears angry, and you wouldn't want to face the Golden Bears when they are angry.

From the Cal Rugby gamenote,

"Central Washington has a strong side as evidenced by their undefeated record," said head coach jack Clark. "We’re not undefeated, we have flaws, but we believe if we get it right on the day, we can beat them."

Bears' victory over UCLA snapped a surprising two match losing streak where the Bears lost to University of British Columbia Thunderbirds (and the World Cup due to the scoring margin of the two matches) and then East Bay rival in Saint Mary's College. Perhaps injury had something to do with that (in addition to captain Seamus Kelly missing the UBC rematch due to commitment to the US National team).

For this match and since it is near the end of a long season after all, the Bears have a long list of wounded.

[Jared] Braun is out for the season with an injury, joining a list of lost starters that includes backs Josh Tucker, Jesse Milne and Lucas Dunne, and forwardMichael Bush. A separate list of Bears continuing to battle back from injury to full-go includes backs Andrew Battaglia,Patrick Barrientes and Eakalafi Okusi, and forward Patrick Coleman.

Nevertheless, you can be sure that Cal Rugby will not use injury as an excuse.

From the Daily Cal article:

The Bears look like they have finally returned to form after losing two straight games to close the regular season. After injuries decimated coach Jack Clark’s starting roster toward the end of the year, a number of underclassmen have stepped in to contribute in Cal’s playoff run. Freshman Tomas Zerbino and sophomoresRussell Webb and Harry Adolphus all played key roles in completing the Bears’ season sweep of the Bruins.

"I don’t think that this is a matter of confidence; rather, we are reimagining ourselves and the way that we play in these big games," Clark said. "We have done well accepting the reality of our situation regarding injuries and everything. Our focus needs to be on finding ways to win like we did against UCLA."

Today's game is the last home game for the Bears in the 2013-14 season. After the Varsity Cup competition which is a Rugby Union (XV) tournament, the Bears will train in 7s to defend their Collegiate Rugby Championships 7s title from last year. The CRC 7s will again take place just outside Philadelphia, PA in the weekend of May 31st-June 1st.

Videos of the Varsity Cup Super Regional action down at UCLA (last week): 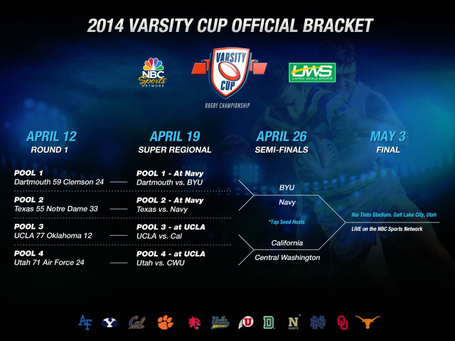 The winner of today's Cal-CWU matchup will face the winner of BYU-Navy in Salt Lake City next Saturday (May 3rd). That game will be televised live on NBC Sports Network.

Finally, the Daily Cal also has a nice story on Alec Gletzer of Cal Rugby. Gletzer went from a fringe football recruit to finding the game of rugby at Santa Barbara City College to a stint with the US U-20 team to transferring to Cal.

"Alec called us all the time, making sure that he was meeting the requirements to make his transfer to Cal complete," Clark says. "I was really impressed that he was able to make a plan and execute it all on his own. We monitored his skill and development from afar and were very impressed by what he had been able to accomplish in such little time."

After months of phone calls to Clark and rigorous studying, Gletzer made his transfer to UC Berkeley official in spring of 2013. He would be playing under the best coaching staff possible, only two years after he had first touched a rugby ball.

"I wanted a shot to play rugby for the best team in the country and to study at the best public school in the world," Gletzer says. "It was a win-win situation for me."