Golden Scholars: UC Berkeley researchers iron out glitches in the Matrix and try to read your mind

Let's get into some brainy headstuffs as Berkeley researchers probe into how the human brain works.

Share All sharing options for: Golden Scholars: UC Berkeley researchers iron out glitches in the Matrix and try to read your mind

I really want to flaunt my pop-culture knowledge by making more witty and topical references to the Matrix right now, but I shall will myself to resist. But, speaking of recent films, let's go back and remember Pretty Woman, a movie I've never seen:

Eagle-eyed readers (or people with enough awareness of their surroundings to look at the title of the video) may have noticed there was a production error in that scene. The food in Julia Roberts's hand switches from croissant to pancake during the conversation. It's possible she's just very fickle and keeps changing her meal, but at the end of the clip, you can see her take a bite into the pancake, which disappears in the next shot.

Berkeley professor David Whitney is doing research into why the human mind glosses over such mistakes. Whitney proposes the mind sees the world with a "continuity field" that has nothing to do with Tony Stark being abducted in changing wars as real-world time advances. Whitney believes this "continuity field" is the mind ironing out little changes to create a smooth and logical image for us to comprehend.

Whitney pieced tested this hypothesis by showing test subjects a flash of a set of short, parallel line segments. When they disappeared, the test subject had to trace the angle of the lines and the test would repeat with another set of bars. If the next cluster of bars was physically near from the previous set, the test subjects exhibited a bias towards drawing angles similar to the old clusters; this response was not seen when a cluster was nowhere near the previous ones.

This is a novel discovery "because it means the visual system sacrifices accuracy for the sake of the continuous, stable perception of objects." Without this phenomenon, we would possibly be noticing every blink of light or the minor twitches and movements of people we're talking to. The researchers believe this would be a very jarring experience, likening it to an acid trip. So, the next time you want to get high, just find a way to disable your continuity field?

So, that's who The Clairvoyant is...

Alan S. Cowen, a Berkeley grad student, is working with Yale and New York University to develop technology that READS YOUR MIND. I swear, this is the first time the image of you in your underwear has popped in my head. This has never happened before!

There are six test subjects; 300 training faces; each face has a limitless number of variables describing facial features; and all the fMRI data describing blood flow and brain activity. In short, this is a ridiculous amount of data, even for the awesome souped-up computers they're probably using. Thus, researchers used programming techniques like principal component analysis (PCA) and partial least squares regression (PLSR) to simplify the data, which basically reduces the amount of data needed to still capture the essence of the original data.

I'm not an expert in these tools, but I can show you an example with a similar technique called singular value decomposition (SVD). (Fun fact: I've done this analysis for a class assignment using The Play, but I don't think we have the rights to use that image here.) We start off with an image of our beloved Oski:

This image can be described by a computer with 125 measures (or singular values). We reduce the number of singular values and find the computer does a pretty good job of reconstituting the image, which will save on computing time. You can see how this will make it easier for the computer to process all the data needed in Cowen's facial analyses. 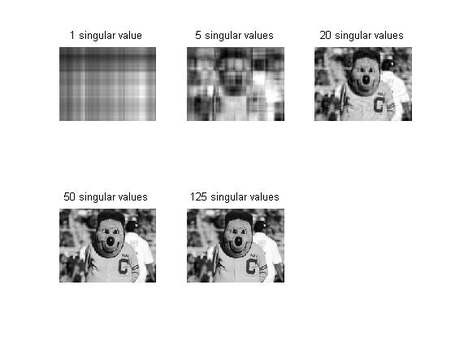 The subjects were then shown a number of "test" faces that were unknown to the computer. By comparing fMRI data from these test cases to the training data, Cowen's program was able to construct images that resembled the originals, kind of like blurred images while squinting.

So, what are some of the applications of this research? This could be used to better understand the perspectives of socially anxious individuals or biased people. It has the potential to aid in the field of autism, which is related to "abnormal face processing." It might even be used for recording dreams or recreating a scene of a crime. And I would definitely not use it to figure out how that cute girl at the coffee shop perceives me.