Can we ever have enough posts on this game? I SAY NO!

What an amazing game Saturday night. I cannot remember an atmosphere like that at Haas, ever. The Arizona fans brought their A game, but the Cal fans, we were not going to take that lying down. Thanks to the delightful sponsorship of [Insert Sponsor Here], everybody had their gold T-Shirts and Haas was ROCKING! The place was packed to the gills.

I've been going to Cal games for a long time and for the last 10 years or so, it's been incredibly easy to (a) get day of game tickets and (b) sit almost wherever you wanted. Last night was not the case. My abilities to get tickets for people was zero. Cal fans are not known as being "hardcore fans" generally for reasons that elude me. Having seen how many people continued to turn out for football game after football game in the 2013 football season, I would say we're hardcore. Last night was no different.

We were making an absurd amount of noise all game long, whenever and wherever it was necessary. Whenever Arizona fans started up one of their chants (and, admittedly, they did a great job making noise, too), the micmen got us in the game with a counter chant. There was one time when the Arizona fans were making a rather great chant on their end. The micmen immediately got the entire arena into perhaps the best Go Bears! chant I've ever experienced. It was a hot crowd ready for a great game.

It reminded me of the Ohio State game this past year. We had a great crowd there and really showed off great sportsmanship with the battle of the bands. Unfortunately, we didn't have a chance in that game, but here we did.

Here are some photos from the game to enjoy!

Despite Arizona's #1 ranking, Cal actually had the upper hand in this game for the vast majority of it. Arizona only led for a short portion of it, if I recall correctly. Cal had the lead and at one time that lead stretched out to 8 points, I think. As a factory standard Cal fan, I lived in constant fear of that other shoe dropping. It is the nature of things. Arizona is the #1 team, certainly at some point they will show up, right? Cal's D was keeping Arizona to a low shooting percentage and you thought "Can they keep shooting that bad throughout the entire game?" They shot in the low 30s for the game, so the answer is YES!

These guys were doing their best to distract the opposing team's free throws with their giant head and rotund belly. Since Az were perfect for the night on FTs, I guess it was not Mission Accomplished.

Here is the men's gymnastic team doing a cool flip. They lined up a long row and then each did a back flip one by one. I can barely bend over to touch my toes, so it seemed extremely impressive to me.

The refereeing was not great, but the fans were right on top of the refs. Even though I was all the way on the other side of the arena from fiatlux, I could see him up on his feet yelling at the refs almost any time something didn't go in our favor. That's how animated he was. Gotta love that Cal passion. Let's take a look!

The halftime entertainment was unicyclists playing basketball. How odd, but enjoyable!

Here is Arizona coach Sean Miller. He has that intense personality you always see in coaches. I didn't see noted Jorge kicker Joe Pasternack there, but I'm sure he was there somewhere. I'm happy he was able to find time in his busy kicking Jorge schedule to come lose to Cal.

Here are the fists of glory from the student section as they did that Go Bears! chant I was writing about about.

And the video itself thanks to Fiatlux:

And, thanks to fiatlux, here's a video of another chant, this time CAL-I-FOR-NIA. I noticed that Arizona fans were doing AR-I-ZON-A, so we got some cross battles going, which was fun.

As the 2nd half would down, Arizona and Cal were neck and neck. Cal maintained a slight lead, but a short spurt from Arizona could easily get rid of that. There were a lot of key moments that will get lost in the last second dagger. There was a Arizona dunk that was blocked from behind. That was huge. Cal got a turn over, but then the Cal player (Bird, I think) got knocked over. In trying to throw the ball to another Cal player, he turned it back over and Arizona scored quickly. It was extremely intense as we headed towards the end game.

Thanks to valued reader CalBear81, here are some great videos of the crowd and its energy at the tail end of the game (i.e last minute!).

We even did the Seven Nation Army thing, which I've never paid much attention to, but seemed cool. 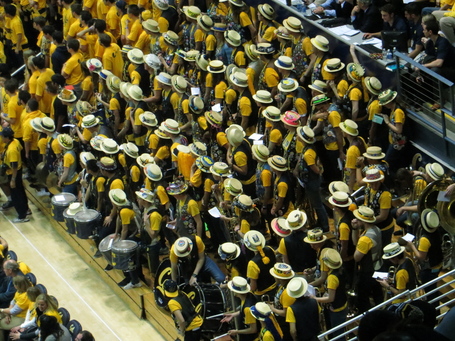 With 16 seconds left, Cal had the ball and the last chance to score. Everybody knew Cobbs was gonna take a shot. Cobbs let most of the time run down to make sure that Az didn't get a last gasp and went for it. Here he is coming up the side of the key to open up the shot. We'll find out in the 2nd part of the photos here what happened. SPOILER ALERT: IT WENT IN AND WE WON AND IT WAS AMAZING AAAAAAAAAAAAAAAAAHHHHHHHHHHHHH

CAL BEARS UP NUMBER ONE ARIZONA