Cal Rugby wins the home leg of the World Cup bout with UBC, Baseball splits series with No.18 Texas, Softball had mixed results down in San Diego, Missy Franklin not enough for Cal W. Swimming, and more.

From earlier this week, Twist has proved the CGB readers a sense of the action from this past weekend when many CGBers were in attendance for the "World Cup" opener last Saturday. The Bears were triumphant with a 33-24 result and a 9 point lead over University of British Columbia Thunderbirds (12-1) going into the Vancouver leg of the battle.

Bears followed that result up when a squad of young players were able to beat Santa Clara 74-13 on Wednesday night.

Up next, the Bears will make their Pac-12 Networks debut when they host UCLA on Saturday.

In other Rugby news, the Varsity Cup bracket has been released. The tournament's field has expanded a bit this year, but that doesn't affect teams like Cal (or last year's champ in BYU) that have a Round 1 bye. Instead of flying across the country to play in Annapolis, the Bears will open Varsity Cup play down in LA instead. 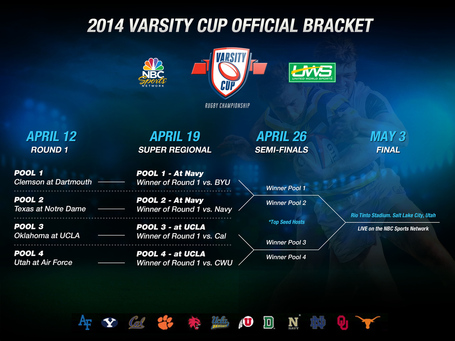 Cal's captain Seamus Kelly is featured in the latest "Inside the Lair" video. Seamus talked about his training with the US National team during the fall.

More well deserved rugby publicity, Coach Jack Clark was on Inside the Locker Room radio show this past week.

No.4 Cal Women's Water Polo has a successful tuneup last Saturday when they took care of business against Long Beach State (15-7) and Santa Clara (17-6). The task is considerably tougher this weekend at the tournament hosted by UC Irvine where all the top teams will be present.

Behind the arm of last week's Pac-12 Pitcher of the Week, freshman Daulton Jefferies, the Bears were able to win their opener 5-0 last Friday against then No.18 Texas. Bears followed that up with another win (2-1) before suffering the first loss (6-2) to split Saturday's double header. Texas earned a split on Sunday with a 5-0 win.

What's good - the freshmen performances of Jefferies and also Saturday game 2 starter Alex Schick (before tiring and the pen allowing his inherited runners to score). The Bears offense was also able to capitalized on the Texas errors. Perhaps more importantly for the longevity of the program, >1200 people showed up for the game on Sunday.

What's a bit concerning - only 4 of the 11 runs scored by the Bears were earned. Can the Bears score more without opponents' miscues?

What's next: The Bears travel to Alabama this weekend to play against Auburn and some other teams (East Tennessee State and Arkansas Pine Bluff to be exact). The Auburn game tomorrow will be streamed for subscribers of Auburn's online broadcast.

Things get considerably tougher this weekend at the Mary Nutter Collegiate Classic.

That's 4 ranked opponents for the now unranked Bears (who were ranked 23rd last week). Can the Bears rise up to the competition?

Missy Franklin won her 3 races but that was not enough for the No.1 Bears, who got edged in enough races to lose the Big Meet to 'Furd. The Pac-12 Championships starts on Wednesday, the Bears will look to win their 3rd conference championship in program history. For comparison and maybe a sign of what is important, the Bears have only won 2 Pac-12 but 3 National Titles in program history (all in the last 5 years).

Pac-12 Networks will do a tape delayed coverage of the Pac-12 Championships and of course using another interview with Missy Franklin to try to promote that.

Then 11th ranked Cal Men's Tennis competed in the ITA Indoors down in Houston last weekend. The Bears beat No.9 Mississippi State 4-3 but fell to No.1 Virginia 4-0. Bears closed the trip with a 4-2 loss to No.10 Texas. Nevertheless, the Bears have risen to No.9 in the rankings this week.

No.2 Golf is in a good shape at the John A Burns Intercollegiate with a 9 stroke lead after day 2. By the way, the Bears get to be in Hawaii for this tournament.

When was the last time college golf made the front page of the sports section? Great stuff here in Kauai. Mahalo! pic.twitter.com/9WchRyquQ5

A Cal Volleyball news that I forgot to mention has been the news that 2013 starting outside hitter Michelle Neumayr and backup outside hitter and former setter Lindsay Parrott have both decided to leave the program to focus on the academics. Best of luck to both of these student-athletes but this means that the team has to rely more on its youngsters.

Freshmen Alyssa Jensen (next year's starting setter) and Maddy Kerr are both trying to get very valuable experiences by going to the U.S. National Team tryout. I believe it was this particular camp and experience that was the catalyst back when Tarah Murray made the leap from a good but raw player to a great player between her sophomore and junior year.