The entire post with lots of videos can be seen by clicking here: http://iamfiatlux.com/2014/11/24/pac12-officials-officially-incompetent-according-to-pac12/ 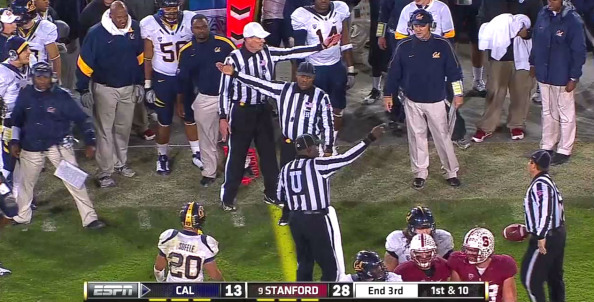 Let’s begin with this. Complaining about referees and umpires is a favorite pastime of fans around the world. It’s fun. It really is. And truth be told, there’s something really entertaining about it when bad calls go against a home team and the crowd gets riled up. That sort of primal booing gets us going.

We normally hear about how "complaining about officials is for losers." And I sort of agree with it. But in the case of the Pac12, so often the officiating in a game is so egregious it warrants discussion and gets national attention.

This past Saturday in The Big Game between Stanford and Cal at Memorial Stadium in Berkeley, we experienced one of the most hideous displays of officiating people can remember. And here’s the thing… it wasn’t one call, like in Oregon v Oklahoma. It was ongoing all game.

On the very first play of the game, Cal’s Michael Lowe was EJECTED for an alleged targeting play by umpire Rick DiBernardo. First play of the game. No one can ever remember seeing that. Let’s say for the sake of argument the call was correct. Later in the game Stanford’s Ronnie Harris takes a completely cheap shot on Cal’sTrevor Davis. Watch the video. A few things to note. The pass was well overthrown. The play is done. Davis is clearly no longer going for the ball. And yet Stanford’s Harris hits Davis in the neck and head with his forearm. A play that should lead to a penalty and ejection. And here’s the kicker, the official (two in fact) ARE RIGHT THERE as the play happened in the wide open field. No penalty.