Washington State has Mike Leach's pass happy version of the Air Raid, but running the ball has been a key for the Cougars this year. What does a Wazzu run look like and what are the keys for the California Golden Bears on defense?

Share All sharing options for: Rest of the Pac Breakdown - Washington State 2014

There has been an interesting trend in Pullman this year: the run.  Mike Leach, head coach of the WSU Cougars and noted practitioner of the Air part of the Air Raid offense, has been calling more running plays as the season progresses.  The trend over the first four FBS games has been the following

Last year 22.2% of Washington State's plays were runs (after adjusting for sacks), so this trend may be regression to the mean, but the Cougars have played better in the games where they have run the ball than in those where they have not.  Against Oregon they traded punches until Oregon got the last swing.  Against Utah they trailed the entire game, 21-0 at one point, until they rallied in the 4th quarter to win.  The major beneficiary of the increase in carries has been redshirt freshman Gerald Wicks (#23), who had 4 carries in the first two games combined and 30 carries in the latter two games combined.

Lets take a look at a couple of the formations in which Wazzu's run tendency is high...

In this formation there are two backs in the backfield with the quarterback, five linemen, two receivers to the wide side of the field and one receiver to the short side of the field.  The two running backs are Wicks and fellow redshirt freshman Jamal Morrow (#25).  Utah responds to the pass heavy offense with what looks like a 3-3-5 (3 linemen, 3 linebackers, 5 defensive backs). 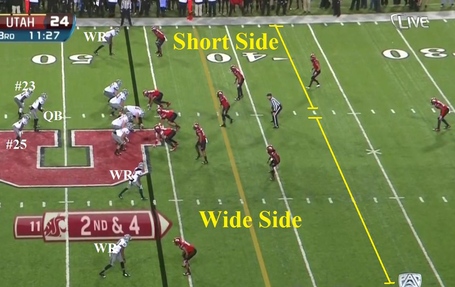 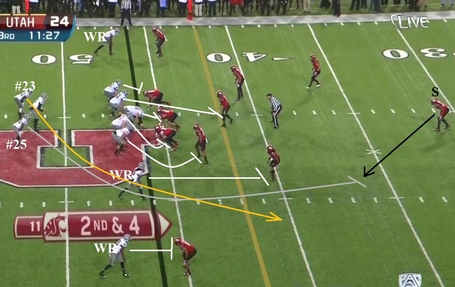 Washington State has a 1 man advantage on the wide side of the field plus more grass there.  #25 Morrow becomes a lead blocker who will take the Safety, the linemen block the defender on their right shoulder and the receivers fake deep routes only to stop and block.

If all the blocks had held, there would be no one who could tackle the running back, Wicks.

Here is the same formation but the ball is on the other hash mark.  Notice how WSU flips their formation... 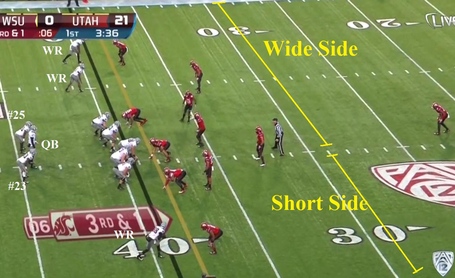 Once again the Cougars run to the side with a man advantage and more grass, the Wide Side.  This time Wicks makes a cut and slashes through a hole in the middle of the line instead of following his lead blocker.

Of course there is no formation that Mike Leach will exclusively use for running plays.  Here is one way he utilizes this formation for a passing play. 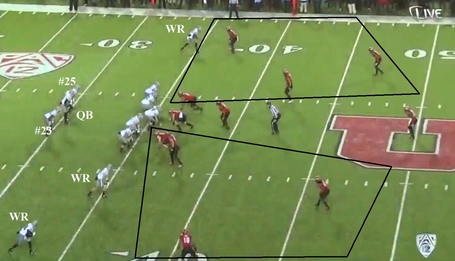 The ball is placed in the center of the field but Wazzu has a man advantage to the bottom of the screen.  Notice that #23 Wicks is on the side with two receivers while #25 Morrow is on the side with only one receiver.  By the numbers this year Morrow appears to be the better receiver (more receptions, more yards, more yards per reception), could the way they are lined up telegraph that this is a pass and not a run? 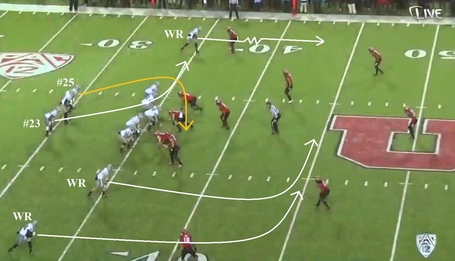 The receivers halfheartedly run 10 yard yard patterns.  Just their threat clears out the underneath zone as the DBs and Linebackers drop into coverage.  #25 is the primary receiver while #23 is available for a short throw if the linebackers do not drop.

The result is a 2 yard throw and a 13 yard run after catch.  The outside receiver while running a terrible fake does provide a good block at the end of the play.

Here is another little pass Washington State runs out of this formation.  Again #23 is on the two receiver side, though this time he is the target for the pass.

This is not an extensive study of every time this formation has been used by WSU but perhaps there are some tendencies the Cal defense can exploit:

Maybe Cal Defensive Coordinator, Art Kaufman, can disguise the coverages, bring blitzes and move personnel before and after the snap to gain an advantage.

I think that during the Oregon game Mike Leach got his sheet of plays mixed up with David Shaw's because on multiple plays Washington State lined up with extra Offensive Linemen.  Maybe this is something Leach picked up on film study of Oregon or maybe it is a new part of his playbook.  Either way it deserves a closer look. 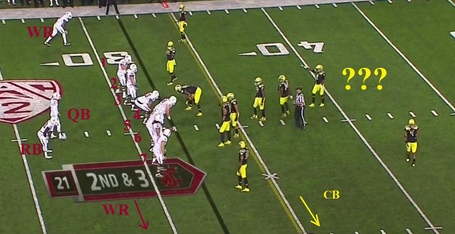 Eventually Oregon decides to put two Linebackers in A-Gap, Defensive Tackles in B-Gap, a defensive back (Ekpre-Olomu) in the wide side C-Gap, Nobody in the short side C-Gap and the Defensive Ends in D-Gap for contain.

There is a man advantage to the top of the screen ( a two man advantage), is there any doubt where this play is going?

Right through the empty C-Gap.

The next time Wazzu lines up in this 7 Offensive Lineman formation, Oregon manages to get all the gaps covered but it is at the expense of a Defensive Back.  Oregon is only able to get single coverage on the receiver to the top of the screen, #80 Dom Williams who is one of the tallest on the WSU roster at 6'2''.  Oregon, knowing their weakness puts their best defensive back, Ekpre-Olomu on coverage of #80. 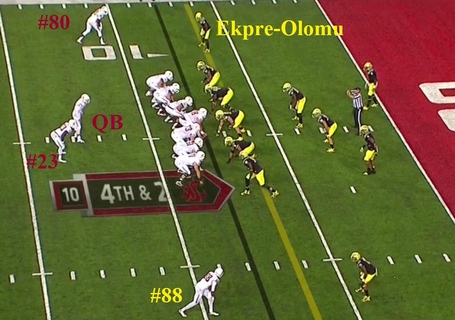 Too bad for the Ducks, Connor Halliday has been throwing completions over Ekpre-Olomu all day long.

I am sure Art Kaufman has seen this formation and will have a package and scheme ready for it.  The real questions are:

Is Oregon vulnerable to a heavy formation and should Cal have one ready for the Ducks?

Washington State may be 2-3 this year but they are a team to reckon with.  Connor Halliday leads the FBS in passing yards, 500 yards ahead of anyone else.  The losses WSU has suffered have been close ones.  Their offense is as potent as Cal's (tallying 115 more passing yards per game than the Golden Bears).  Their defense is better than they look on the score sheet.  And it is never easy to travel to or play in Pullman.  Cal can win any game they show up to this year, Saturday's game should have all the excitement and nail biting we have become accustom to this year.