Welp, we have the name.

Cal will hire former Cincinnati defensive coordinator Art Kaufman to take over for Andy Buh. We have official confirmation from the school and CalBears.com:

BERKELEY – Cal head football coach Sonny Dykes announced Wednesday that Art Kaufman, who has developed some of the top defenses in the country at multiple stops over his 32-year collegiate career, has agreed to become the Golden Bears’ defensive coordinator. Kaufman has 12 seasons of experience as a defensive coordinator at the NCAA Football Bowl Subdivision level, serving in the role at Cincinnati, North Carolina, Mississippi and Texas Tech. He was nominated for the prestigious the Broyles Award given annually to college football’s top assistant coach both at North Carolina in 2011 and Texas Tech in 2012.

"After an extensive search and evaluation process, we have identified one of the top coaches and teachers in the business to join our staff at Cal," Dykes said. "Art has a tremendous amount of experience and an excellent track record in significant roles on the defensive side of the ball at the highest level of college football. He is a great fit at Cal as he shares in our philosophy of developing players to their fullest potential both on and off the field, while being an excellent teacher in all aspects of the game." 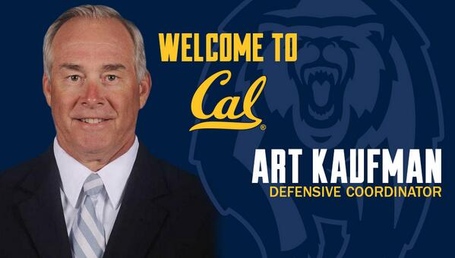 And now we return to your previously regularly scheduled post:

At Cal, sources confirm to us that Art Kaufman will be the new defensive coordinator http://t.co/EGEMGRpuoc

Some info from the article:

We've covered Art Kaufman a few days ago. He has helped improve defenses at North Carolina, Texas Tech and Cincinnati, although his task at Cal will probably be more drastic than anything he's attempted at any of those schools. However, in terms of overall defensive coordinator experience, he brings nearly 15 more years of experience at coaching the entirety of a defense than his predecessor.

There is still no word on whether Cal will hire a defensive line coach to replace Barry Sacks or whether Garret Chachere will be taking over full-time responsibilities at the position. Rumors still swirl around the defensive backs coach. As such as we get any information there, we will send word along.

What is your thought on this hire? Grade them in the poll and discuss in the comments!

#Cal players have been informed today that former Cincy DC Art Kaufman is the #Bears' new defensive coordinator, per source.