Are you ready for gameday? Cal vs. Portland State Pregame Thread

Cal tries for its first win of the season today against the Portland State Vikings. Will the Bear Raid go wild against an FCS opponent? Will Cal's defense improve over last week's performance?

Share All sharing options for: Are you ready for gameday? Cal vs. Portland State Pregame Thread

CLICK HERE FOR IN-DEPTH COVERAGE OF CAL VS. PORTLAND STATE

What a difference a year makes. Okay, maybe not that different in one respect. This time last year, our California Golden Bears were 0-1 after a stinker of a home loss to Nevada. This year, Cal is 0-1 after last Saturday's 44-30 loss to Northwestern. But the vibe is decidedly different this year than last year. Whereas last season's opener seemed to foreshadow a season of DOOM for the Bears, last week's loss to Northwestern, though a bitter pill to swallow, left most Cal fans with a sense of optimism about the rest of this season. That's what a competent offensive performance (30 points, 500+ yards of total offense) and some successful trickeration (FAKE FIELD GOAL!) will do for a fan base.

But at the end of the day, a loss is a loss and the Bears are still searching for their first win of the Sonny Dykes era. Cal hopes to get it today against an FCS opponent, the Portland State Vikings of the mighty Big Sky Conference. These programs are matching up for only the second time ever. In the first meeting, Cal scored 42 first-half points and cruised to a 42-16 home win behind the likes of Nate Longshore, Marshawn Lynch, Desean Jackson, Daymeion Hughes, and . . . wait for it . . . BRIAN SCHUTTE.

The 2006 Portland State-Cal game was apparently so lacking in highlight material that thisvideo includes highlights from other games!

This season, Portland State is 1-0, coming off a 57-17 win over Eastern Oregon, an NAIA school. While the 40-point win was easy, there were at least a couple of statistics that probably raised red flags for the Vikings' faithful. Portland State committed 16 penalties for 139 yards (and you thought YOU were concerned about Cal's 10 penalties last week!) and fumbled the ball six times (losing four). But there's an old adage that the most a team will improve all season is between its first and second games. If that proves true today, perhaps we will see fewer mistakes from both teams.

What can we expect from this year's matchup between the two teams?

norcalnick previewed the Portland State defense and came away optimistic of the Bears' chances to rack up yards and points today.

The bottom line is this: Last year, Portland State had a very poor defense by FCS standards. They have completely revamped their defense this year, with only 4 starters with previous starting experience for the Vikings. It's entirely possible that some of the transfers are superior players to the ones that left last year. It's possible that they aren't. Either way, it's likely that those starters aren't fully integrated together and with the defensive scheme, and they haven't had any opportunity to prepare against an opponent similar to Cal.

Cal just put up more than 500 yards to a ranked, Big 10 opponent. There is zero reason to suspect that Cal won't be able to do more than that this week. And, as is frequently the case against FCS teams, this week is more about ironing out execution and getting comfortable than anything else.

Last week, it was the Cal defense that gave Cal fans the most worry. Northwestern shredded Cal in the passing game all night long. And even though the Bears had their moments stopping the run, Northwestern gashed the Bears with enough gains on the ground to make us feel uneasy.

What have we learned? We must shut down the running lanes and limit DJ Adams. The front seven absolutely has to be solid in its tackling--McDonagh is a big, physical QB who can Cattouse (sorry!) a sloppy defender. The Vikings will use unusual formations and unconventional plays to keep the defense guessing. This is a productive, experienced FCS team, but it's still an FCS team. If we get pushed around by their O-line, we will have serious, serious problems this season. This is a dynamic and deceptive offense that should be a great way to get our guys in shape and disciplined as Ohio State and Oregon loom later this month.

If you want unusual, you may see it today. Portland State features a multitude of formations on offense, including the infamous A-11 offense. 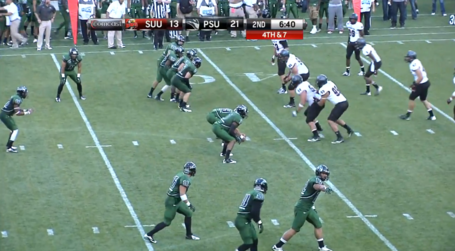 It should be fun, shouldn't it? With eight FCS teams defeating FBS teams last week, Cal cannot afford to overlook Portland State, especially when the Vikings' unusual wrinkles can potentially cause havoc.

This is your pregame thread. Warm up for the game here, getting out your jitters in the comments. Look for the link to the first quarter open thread as kickoff draws near.