A Golden Spotlight on Cal vs. Ohio State

Put me in the minority, but as disheartened as I was by our win over Portland State, I find myself strangely not-discouraged by our loss to OSU. Too much time in the sun? Perhaps. But I saw a young team go out and compete despite being over-matched across the board. There's a reason the Buckeyes haven't lost in 15 games and are a legitimate BCS contender. It would have taken a perfect game on our end and there were far too many mistakes. But the sins of inexperience will get better with time and our sturdy Golden Cubs showed some promise.

Share All sharing options for: A Golden Spotlight on Cal vs. Ohio State

It's a critical 3rd down in Cal territory. OSU is driving yet again and the blowout-meter is a'flickering. Ohio State comes out with their standard 4 WR w/ single-back spread package. Cal is in a 4-2-5 nickel (essentially our base look) and looks to be using a Cover 3...But check out the personnel. DC Andy Buh has a unique lineup using McCain(40) and Kragen(13) inside with Barr(41) and King(99) at defensive end. McClure(21) has moved inside as a nickel back to cover the slot. Joel Willis(18) is the boundary corner at the top of the screen. Drew(27) is playing deep centerfield while Lowe(5) is closer to the box. 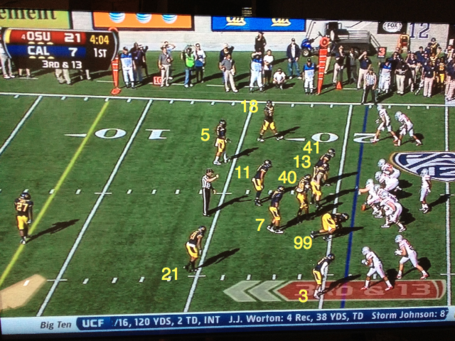 Right before the snap, Fortt(11), Jefferson(7) and McClure(21) all rush up to the line of scrimmage threatening blitz. 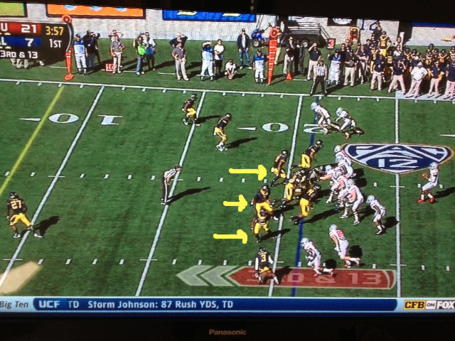 But it's a feint. As the play unfolds, Fortt, Jefferson, and McClure retreat into zone coverage. McClain runs a stunt and loops around Kragen towards the B gap. 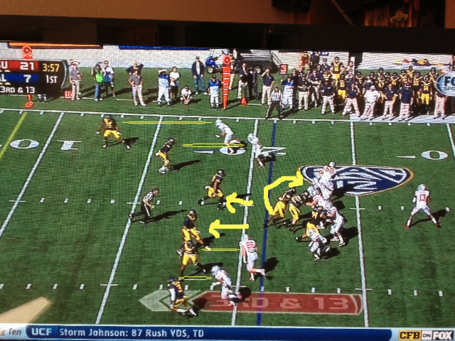 The Cal defenders are doing a good job dropping into their zones and closing down potential throwing lanes. McCain, Kragen, and King get stood up, but Barr puts on a burst and gets around the mountain range masquerading as their right tackle. Guiton has to step up and throw early... 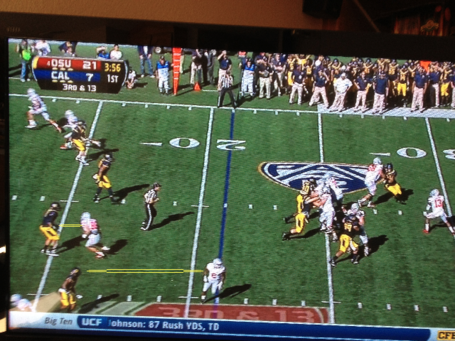 ...Guiton channels his inner Maynard and air-mails this one to the stands. The stripe-out probably disoriented him. Even if the pass had been completed, Willis, Lowe, and Fortt are all close by and likely would have made the stop short of the yard markers. Considering how the 1st quarter started, this is an huge victory for our young D. 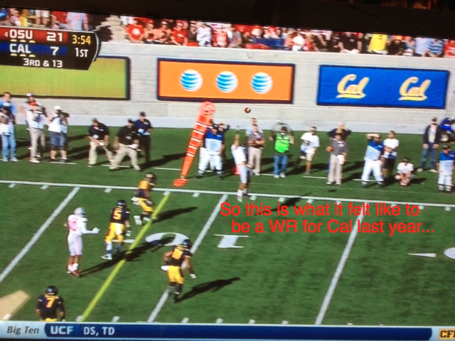 Cal looks to counter-punch. We're in our base 4 WR, single back spread set. Bigelow is slightly ahead of Goff which usually indicates that he'll release as a receiver. Ohio State looks to be in a Cover 2. 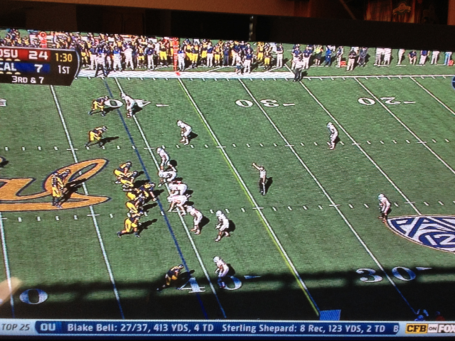 Before the snap, one of the OSU safeties moves up into the box suggesting that they're switching to a Cover 3. 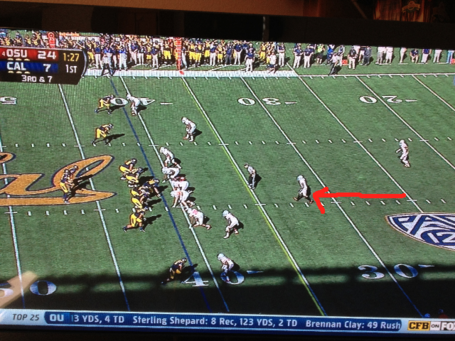 Instead of snapping the ball, Cal goes with the ever-beloved Check-With-Me. There was a fascinating chess match all day with regards to how OSU played the C-W-M. While the Cal players were looking to the sidelines, the OSU players were also looking towards theirs. More often than not, OSU switched defenses while Cal was doing their C-W-M. In this case, both safeties move up towards the box... 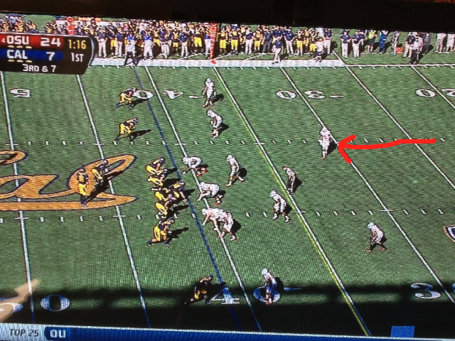 ...but it's disguised coverage. At the snap, one of the safeties immediately retreats towards the deep center of the field suggesting a switch from Cover 2 to Cover 3. 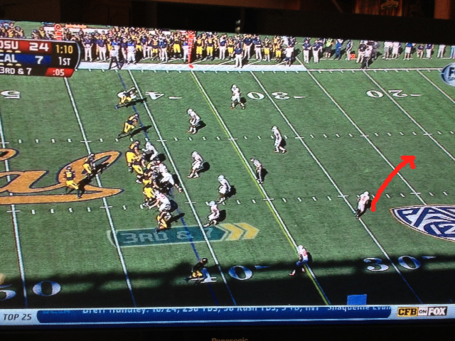 Undeterred, Goff starts with a quick roll-out to the left. The outside receiver runs an out pattern while the inside receiver moves forward to block their corner. The line allows their Dline to run by while they set up towards the playside. t It looks like a quick-hitting WR screen to get a first down... 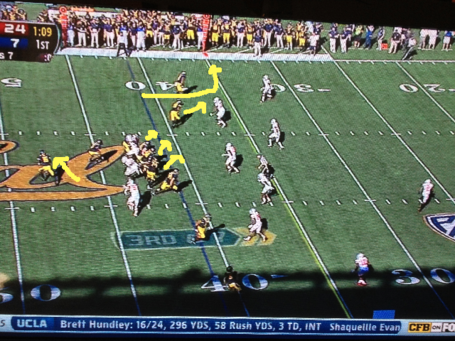 ...but Goff spins around and looks towards the backside. This game looks to be the first time that Franklin started using Chapter 2 from the Bear Raid. For the first two games, the run-pass combination plays were very much an A or B type of play. We either threw towards the playside, or ran towards the backside. Some of our plays got blown up because defenses were cheating and ignoring the additional fakes. During this game, Franklin started to expand the offense and used both counter runs and backside passes to punish the defenders for jumping out of position. You can see that the fake playside screen has draw the OSU interior defenders towards the top of the screen... 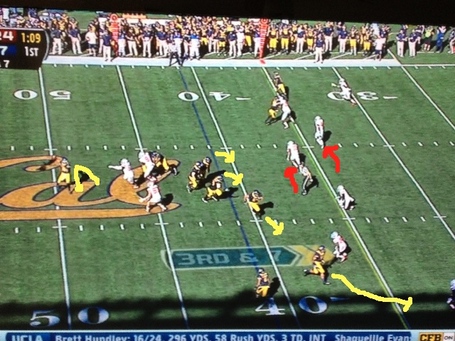 ...the OSU pass rush gets to Goff, but he's already released the ball to Harper on the backside. Rodgers is moving to block the corner assigned to Harper. The Oline has turned away from the top of the screen and are now moving en masse towards Harper. 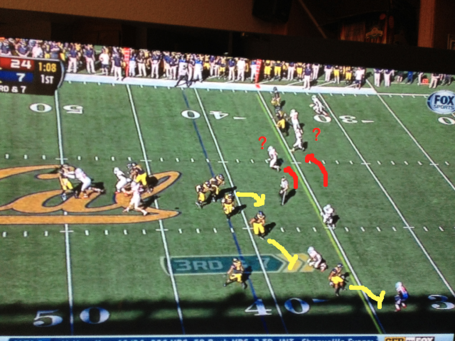 As Harper catches the ball, a convoy is forming in front of him... 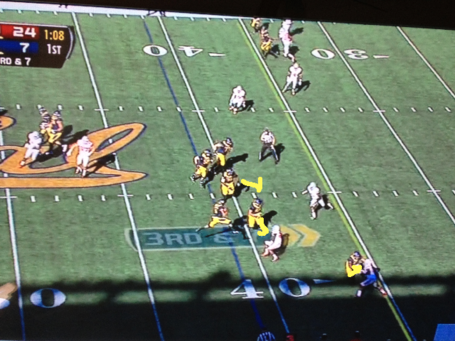 ...BOOM. You can hear the pads pop as Moore and Cochran level the nearby defenders. 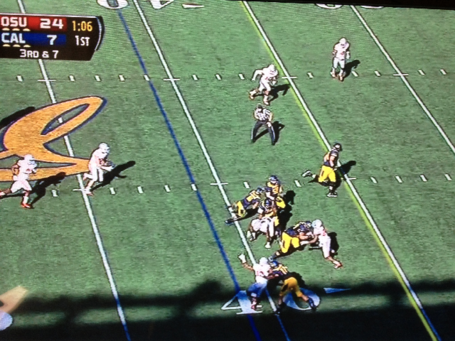 From this perspective, you can appreciate Cochran's pancake block and the huge expanse of open grass waiting for Harper. He turns on the jets and jukes his way through the remaining defenders. 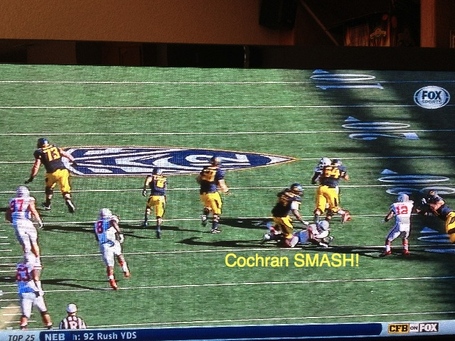 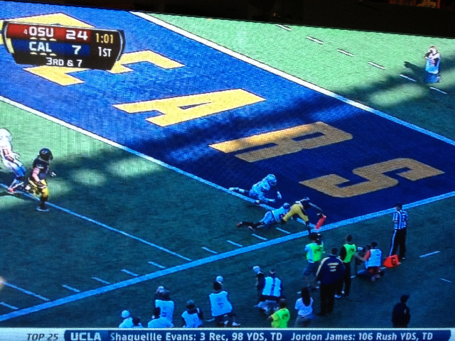 A few random observations before we head into our bye week:

1) This is a true frosh running our offense. He already looks as good as any QB not named Rodgers over the past decade...and he's going to get better. For a "simple" offense, we're still not using everything yet.

2) Considering the personnel issues, our defensive schemes are sound. The problem is that we're losing our one on ones. It doesn't matter if our coaches put the players in the right position if they flat out get dominated. Tackle play is acceptable. But our ends are getting destroyed. Not a surprise considering you're rotating a walk-on former LB with a JC transfer with an undersized converted LB against blue-chip talent. Moving beyond the Dline, our young LBs are thinking instead of reacting which makes them play a step slow. They're talented and athletic. With time, they'll make faster reads which will help them fill the proper gaps much faster.

3) Why can't we defend sweeps and running plays to the edges?

See above. Our ends are getting swallowed up, our LBs are both a step slow and often getting blasted, and our DBs are having trouble fighting off blocks.

4) I don't feel that the defensive coaches are doing a poor job with their schemes. In fact, they're showing more of an ability to adjust on the fly than what we've seen previously. I'm more concerned about their ability to teach young players where they need to be. Beyond X's and O's, better execution is how we'll judge this defense and this coaching staff as the year goes on.

Picking the right players to earn snaps is also on the coaches. Replacing Lapite/Logan with Willis/Walker was a good move. Finding more production at defensive end is next on the list.

5) For inexperienced players getting thrown into the fire, Joel Willis, Cameron Walker, and Jason Gibson acquitted themselves well. This could be a big step towards solidifying our secondary woes.

6) Take a moment to appreciate the special teams. For fun, watch Gingold on kickoff returns. He's a human wrecking ball out there, often bouncing off of more than one would-be tackler.

7) Sadly enough, the body language of some of Cal's defenders wasn't so great during the 4th quarter. You know who was still fired up? Zach Kline. He caught my eye by sprinting into position so that he could signal in the play call for that last sequence with less than a minute to play. That's a good teammate.

8) I know many of us are ready to fire someone...but let's take a step back from the ledge. Cal football has been fun to watch this year. Yes, the games haven't gone as well as we would have liked. But there's something about how the team competes which keeps things interesting. The players are working hard and they're going to get better. Why not enjoy the ride?

<blockquote class="twitter-tweet" data-partner="tweetdeck"><p>Cal fans I challenge you to give us some home field advantage in our next home game. You guys can make a huge difference.</p>&mdash; Trigga (@BryceTreggs) <a href="https://twitter.com/BryceTreggs/statuses/379715363187195904">September 16, 2013</a></blockquote>
<script async src="//platform.twitter.com/widgets.js" charset="utf-8"></script>

In this case, the bye comes at a good time to get guys healthy and to regroup before a daunting trip up to Nike-town. At least we can guarantee that no deep touchdowns will be surrendered for at least another week. Go Bears!