Cal may have to shatter their program record for most points against the Buckeyes if they want to win on Saturday.

The number should be higher.

Cal hasn't played Ohio State many times, so you wouldn't necessarily expect a big number in their highest scoring game against the Buckeyes. In fact, Cal tied the record last year. But the number should still be higher.

I don't really want to rehash what happened, as you all probably remember. It was a game that cynics would refer to as ‘classic Cal,' wherein the Bears conspired with the universe to deny themselves a chance at a stunning victory.

In retrospect, 28 points on the road in Buckeye stadium against an OSU team that eventually finished undefeated seems like a pretty decent output, especially for a team that ended up with just three wins on the season. But at the time? Immensely frustrating.

You will recall that the Bears gained an impressive 512 yards of offense, which typically means significantly more points than just 28. Cal played a role in their own demise by missing three field goals from 40, 42 and 53. But the refs played their part as well, denying a long C.J. Anderson touchdown pass on the most dubious of holding calls you'll see. Two failed 4th down conversions just added to the frustration, as the Bears managed to slice the Buckeye defense with little positive impact on the scoreboard in exchange.

Are you now thoroughly depressed? Well, don't worry, we're going to end this section on an up note. Because Cal scored 28 points against Ohio State in an entirely different game. What was different about it? Ohio State scored 0, and it was played in Pasadena.

Unfortunately, if you're reading this, odds are you don't remember the game. It was played in 1921, the very first Rose Bowl for both programs, and it could perhaps be considered the crowning moment of the Wonder Teams, when the lesser known team from out West proved their bona-fides by routing the Big-10 champions.

Not surprisingly, CalBear81 has already done the 1920, national champion Bear justice, so you should go read about them and Andy Smith here. But let's focus on just that Rose Bowl:

The Bears' 8-0 record earned them a berth in the Rose Bowl against Ohio State. Despite California's spectacular season, in which they had outscored their opponents 482-14, the east coast media showed little respect for the Bears, and undefeated Ohio State was made an 8-to-5 favorite. But the interest of the west coast fans in the game was overwhelming. Although 10,000 seats were added to 31,000-seat Tournament Park, demand for tickets was triple capacity, and they were sold by scalpers for unprecedented sums. So great was the interest in the California-Ohio State game that the Rose Bowl Committee immediately began planning to build a new, much larger stadium, which would be called, simply, The Rose Bowl.

California scored on its first possession, and then stopped Ohio State on its only legitimate drive of the day, when Brick Muller recovered an Ohio State fumble on Cal's 8-yard-line. In the second quarter, the Bears executed one of the most famous plays in Rose Bowl history. After a first down run, Archie Nisbet feigned injury, laying on the ground for a few moments while the Cal players appeared to be milling around. In fact, they were lining up for the next play. Center George "Fat" Latham took Brick Muller's position at right end. Right halfback Pesky Sprott moved six yards behind the line, behind the right guard. Brick Muller stood 10 yards behind, and slightly to the right of, Sprott. Archie Nisbet unexpectedly rose from the ground, moved to the center spot and snapped the ball to Sprott, who turned and lateraled to Muller. At the same time, left end Brodie Stephens ran full speed down the field, but was ignored by the Ohio State secondary, who assumed that the ball could not be thrown that far. In fact, Ohio State defender Pete Stinchcomb yelled to Stephens, "Where do you think you're going?" Much to Stinchcomb's surprise, Brick Muller threw the ball 53 yards in the air to Stephens, who caught it for another Cal touchdown. It was the play Andy Smith had drawn up for his friend Jimmy Phelan before the season began -- with the trickery of Nisbet's feigned injury added in. After the game Stinchcomb was asked why he had not covered Stephens. He answered, "Frankly, I didn't think anybody could throw the ball that far."

In an era when long passes were almost unknown, Muller's touchdown pass became legendary. But the rest of his game was equally impressive. He had two long running plays, including one on a statue-of-liberty, to set up California touchdowns, he caught three passes for 33 yards, went 3-for-3 on passes he threw, recovered three Ohio State fumbles, and disrupted the Buckeye's running game with his defense. Ohio State coach Elmer Henderson called Muller, "the best man I ever saw in a football suit." 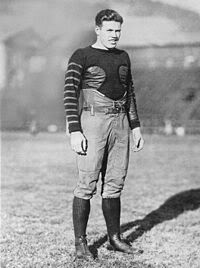 The final score of the game was 28-0. California ended the season 9-0-0, having outscored its opponents 510-14. And the Golden Bears were national champions. So traumatized was the Big 10 by Ohio State's humiliating loss, that it refused to send another team to play in the Rose Bowl for 26 years. Andy Smith became a national football idol, with coaches all over the country trying to emulate his combination of conservative play with the occasional wildly radical call.

Whenever I read about Brick Muller's legendary throw, I wonder if it would be mentioned along with other well-known plays if it had occurred in the modern, TV era. Would it be mentioned with your Desmond Howard punt returns, or your Tyrone Prothro behind-the-back receptions? Of course, the play couldn't have occurred in the modern era - the nature of the ball in 1921 is what made the play so unbelievable at the time.

Can the Bear Raid break the record?

This one is certainly in the realm of possibility. Ohio State's defense was pretty good last year, but they were vulnerable at times, allowing more than 500 yards to Cal, 38 points to Nebraska and 49 points to Indiana. And it's not like the Big 10 was full of explosive offenses last year either.

More than that - Cal's offense was pretty, pretty bad last year. Like, bad enough to get the head coach fired bad. If that offense ran up 500 yards and 28 points, this offense should be able to do at least as well, right?

Additionally, OSU has just one returning starter on the front seven and lost a starting cornerback to graduation. Might a defense that was good but not great last year be vulnerable to the Bear Raid this year?

As always, we'll dive deep into the Ohio State defense tomorrow, but the bottom line is that Cal will likely need to best the record and then some to beat an offense that Berkelium has already terrified you with.