Cal faces another B1G conference contender in the other OSU. What have their games looked like so far this year and is there any cause for hope?

In 2012 Ohio State went undefeated and if not for post-season sanctions would have been playing for the BCS championship. California was one of six teams to end a game within 7 points or fewer (2 games went to overtime) of toOSU last year. It was the breakout game for Brendan Bigelow and left Cal fans giddy with anticipation anytime #5 was on the field. I cannot watch these highlights enough, how about you?

This season the Buckeyes have a lofty early season ranking (#3 USA Today/ #4 AP) but have slid behind #2 Oregon (how did Cal not schedule Alabama this year?) and even behind Clemson (in the AP) due to weak early season opponents. Those opponents are MAC bottom dweller Buffalo, best known in these parts for a certain transfer quarterback and last year's Mountain West co-conference champion San Diego State University. Unfortunately this year's Aztec team is not up to par with last year's team and no where near the Marshall Faulk and Darnay Scott teams of the early 1990s (I remember watching those teams on Prime Ticket when I was in high school).

The lesser competition and the injury to all-everything starting quarterback Braxton Miller made choosing plays to scout difficult. There was little change in the offensive play calling or in overall production when senior backup QB Kenny Guiton took over against SDSU and both Miller and Guiton will show up in the play breakdowns in this article. The success, or its lack, by Tim Tebow and Alex Smith in the NFL shows that it is Urban Meyer's spread option system more than his quarterbacks that make the offense work (you can listen to Meyer describe the advent of his spread option).

The option part of the spread option warrants a closer look as it is the ground attack that makes this offense tick. This is an outside zone read play by the Ohio State offense on 2nd and 6 in the 1st quarter. The Buckeyes come out in a pistol look with 2 wide receivers split out to the top and the bottom (ESPN was nice enough to cut off the formation). SDSU is countering with a Nickle package: 5 defensive backs, 2 linebackers and 4 defensive linemen (or it could be 3 LB and 3 DL). The key toOSU players are quarterback #13 Guiton, freshman speedster #1 Dontre Wilson (you will see a lot of him in this article), tight end #81 Nick Vannett, sophomore Right Tackle #68 Taylor Decker (another player who will be mentioned often), and pulling left guard senior Andrew Norwell #78. 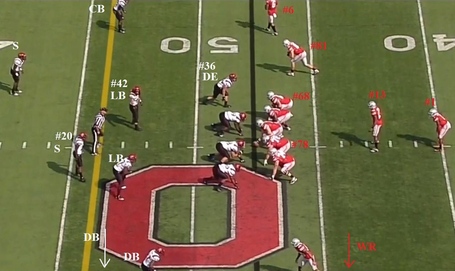 Since this is a read option, there will be an unblocked player who will determine who will be the ball carrier (the option refers to this choice on the play of who will carry the ball. On this play the unblocked player is #36 (the defensive end or maybe he is a linebacker now that I check the Aztec roster). After a check with me, the running back #1 will move to the spread position to the quarterback's left (giving the formation a strong side and a weak side), this will cause the outside linebacker on the running back's side to move up to the line of scrimmage and the safety, #20, to move up towards the line of scrimmage. 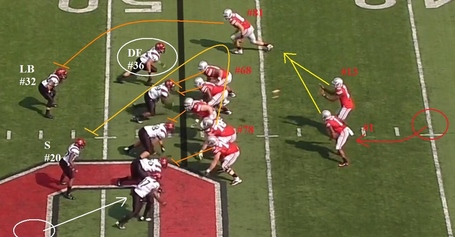 The unblocked player is circled in white. We can see the rest of the blocking assignments: #68 is responsible for sealing the end of the defensive line, #81 is responsible for blocking the linebacker on the play side, and the pulling guard #78 is responsible for leading through the hole and blocking backside pursuit (#20 white in this case). The receiver off the top of the screen fakes a Go route then blocks the cornerback in front of him. 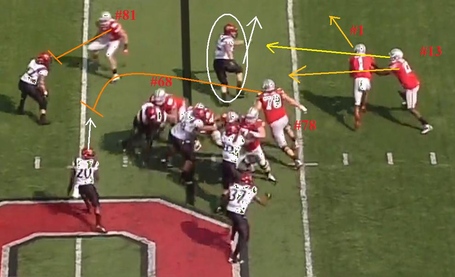 As the quarterback and running back mesh we can see that the circled player has turned his hips and it heading towards the sideline, trying to keep outside contain. The quarterback sees this and keeps the ball, heading up field behind the DE/LB. Ironically the DE/LB recovers well enough to make a shoe string tackle stopping this run for only a 5 yard gain.

The result was a 3rd and 1. One of the things a hurry up offense can do is line up quickly and run the exact same play. Oregon is notorious for doing this and Urban Meyer copies his good friend Chip Kelly by doing the same thing. The advantage is that we get to see a different read in back to back plays.

The blocking is identical, but the DE/LB #36 after almost getting burned by the QB decides to "stay home" instead of moving to keep contain. 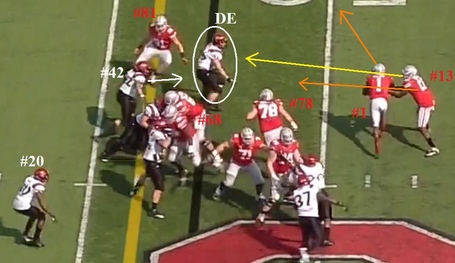 It is a bad decision. There is backside pursuit from #42 and #20 inside, outside there is no one. The quarterback hands off to #1 Wilson.

Against Buffalo I noticed Ohio State was running sort of a modified read option. It took me a while to figure out what was going on. You will notice that in a read option the quarterback moves parallel to the line of scrimmage or will sort of squat in place like he is constipated while he is making his read (during the mesh with the running back).

In this case Braxton Miller #5 runs towards the line of scrimmage to make the mesh with his running back #7 Rod Smith. It didn't make any sense to me, why cut down on the read time and at the same time make it easier for the defensive end to tackle both the running back and the quarterback during the mesh. I will start with the GIF to show you what I am talking about.

The defensive end stares down Miller and handing the ball off is an easy read. But what if the defensive end tried to tackle the running back, where would the QB go? I think the answer can be seen if we look at a larger picture: 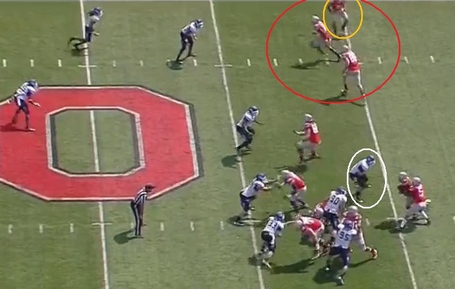 At the top of the screen when the mesh is taking place we can see two wide receivers moving to block and one who is getting in position to receive the ball. The offensive linemen are run blocking, the only way the ball could be passed to that receiver is if it was a lateral or backwards pass. I think Braxton Miller runs forward to get in front or equal to his receivers to that he can toss the ball out there if the defensive end decided to stop the run. This looks like a run/pass read option for a wide receiver screen. Ohio State only ran this variant of the read option a few times in the first quarter before returning to the more traditional read option for the rest of the game.

Here is an example where the Buckeyes ran an old school option. Ohio State is in the pistol formation with trips (three) receivers at the bottom of the screen and one towards the top. Running back #1 Dontre Wilson is lined up directly behind quarterback #13 Kenny Guiton. San Diego State is once again in their nickle package. 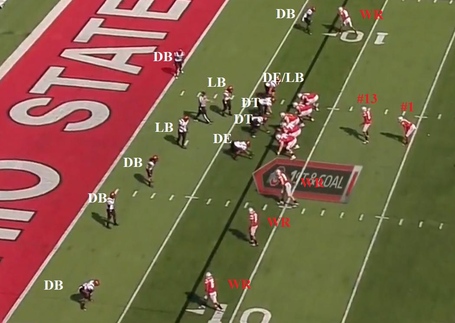 Before the snap SDSU shows blitz. The circled defensive end will be unblocked. The left tackle will block the blitzing linebacker while the receivers block the defensive back across from them. 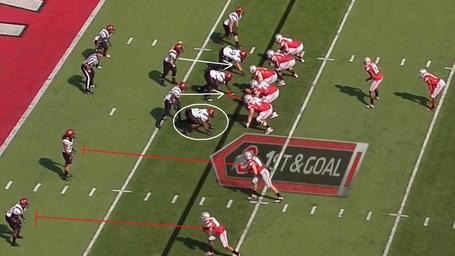 Good blocking from the receivers and great speed from Dontre Wilson make this an easy touchdown.

Two effective quarterbacks, a deep stable of running backs, pistol/option/running QB, all this team needs is an uncoverable Tight End to be truly monstrous. Luckily I did spot a weakness when watching toOSU, the Buckeyes have a serious problem in pass protection. Three times the right tackle was beat 1 on 1 leading to sacks of Braxton Miller against Buffalo. 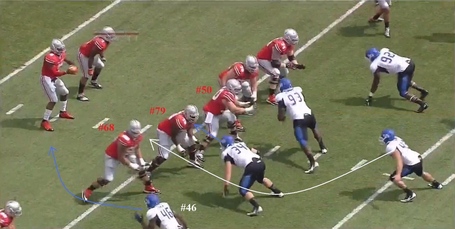 This puts 3 pass rushers against 2 offensive linemen. The senior right guard, Hall, does a great job of passing off # 34 to the center so he can pick up the blitzer. The problem is that #68 Decker is totally unable to handle Mack on his own.

This next play is another where Mack abuses the sophomore right tackle. The defensive pass rushers have a drill in practice they call running the hoop, what Mack does here is a speed rush where he gives a little swim move to get the tackle's hands of of him, drops his inside the shoulder and runs the hoop on Decker.

The third sack #68 gives up is to another speed rush, this time to redshirt sophomore linebacker #43 Nick Gilbo. It resilts in a fumble that Decker manages to recover since he is the only player standing around expecting his quarterback to get hit.

Ohio State recognized that they had a problem with the edge rush and against SDSU took steps to help Taylor Decker out. On this play a tight end #86 is lined up outside of Decker. The Aztecs show blitz presnap and running back #7 Smith is moved to the right to help out as well. 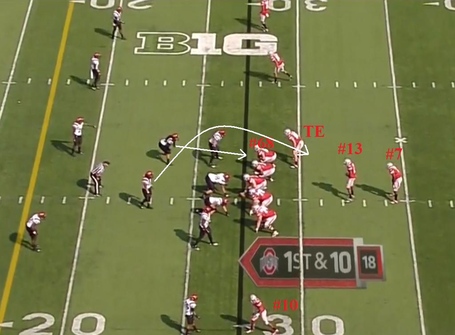 Decker does a good job picking up the blitzer directly ahead of him. Unfortunately all this scheming does not help if no one touches the linebacker coming on a stunt (#86 tries half-heartedly).

Kenny Guiton gets hammered, but not until after he checks his first read and gets the ball off to his second read.

A perfectly thrown touchdown to #10 Corey Brown. Wow, this is their backup QB...

Corey Brown is the favorite wide out target in this offense, toOSU will run plays just to get the ball in his hands. Be prepared to see lots of plays like this:

I didn't intend for almost every play in this article to highlight #1 Dontre Wilson but I do not think it overstates how important he is to this offense. Beyond quarterback, Wilson is the number one playmaker for Ohio State. He was a hyped recruit and reportedly ran a 4.33 40 yard dash after he arrived in Columbus. He is used much like DeAnthony Thomas in Oregon and Urban Meyer will do whatever he can to get Wilson the ball in space.

(Okay, so I had more GIFs prepared than I could get to in this Breakdown and decided to find a way to fit them in.)

The spread option is designed to make opponents play boring passive, assignment based defense. Defenders want to be aggressive by nature: flying around and hitting (you know, lots of Quidditch). It negates a lot of the defensive creativity seen with multiple coverages and blitzes and forces teams into base defenses. This type of defense requires all 11 players to play without mistake. A blown assignment equals a big play (as we saw with Cal vs Portland State). The next two games are really going to test our young defense because Ohio State and Oregon run elite spread option offenses. Experience will help our players, but the learning curve this year is STEEP.

Ohio State struggled with a pass rush from an NFL level talent and Cal has that type of talent in Chris McCain. I would love to see McCain healthy and lining up over Taylor Decker.

In their game against Buffalo the Buckeyes best player on offense, Braxton Miller, and best player on defense, linebacker #10 Ryan Shazier, went down with cramps and missed significant playing time. Look to see if conditioning is still an issue for toOSU in Berkeley.

The other good news is that the Buckeyes are also young on defense. Their pass coverage was less than stellar and there are some real opportunities to break big plays. Ohio State today is not good enough to go undefeated this season. They may grow as a team but right now they are beatable. Can the Golden Bears be the team to hand them their first loss under Urban Meyer? I will be at Memorial Stadium Saturday to find out!