A Golden Spotlight on Cal vs. Portland State

Oddly enough, I feel worse about this past weekend's win than I do about the previous week's loss. Whether it was youth and inexperience that led to coming out flat, or a lack of preparation by the coaches, there's really no way to sugar-coat being taken to the ropes by what should have been an over-matched opponent. Both lines remain a significant concern and it's unknown when or if any reinforcements will be available. "Growing pains" may very well be mantra for the year.

Share All sharing options for: A Golden Spotlight on Cal vs. Portland State

Cal is clinging to a one score lead and Portland State is driving once again. It's a 3rd and 2 with the Vikings threatening to get into the red zone.

PSU comes out with 12 personnel (1 RB, 2 TEs) in a power running look. Cal counters with what looks to be Cover 2. The boundary cornerback (bottom, short side of field) lined up close to the line of scrimmage while the field cornerback (top, long side of field) is lined up off the line of scrimmage. This is fairly standard practice because it's a longer throw to the long side of the field. 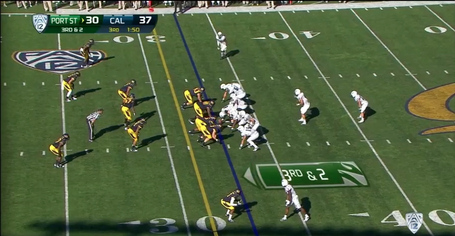 At the snap, Mclure drops deep while Logan moves up. It looks like Cal was showing Cover 2, but are really playing a Cover 3 which brings another defender towards the box into underneath coverage. Jefferson also moves up and looks ready to blitz off the edge. The PSU QB immediately looks to his WR at the bottom, but Kam Jackson is in tight coverage. 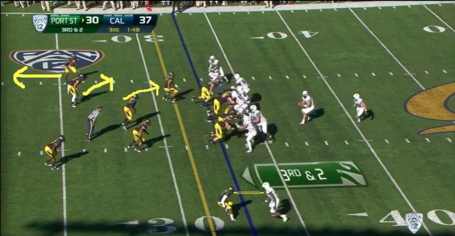 Because Jackson has his man locked down and Barton is moving quickly to cover the outlet tailback out of the backfield, the PSU QB has to check back to the middle of the field. But Coleman has drawn a double team and has opened up the A gap for Jefferson who faked outside then charged back inside on a blitz. 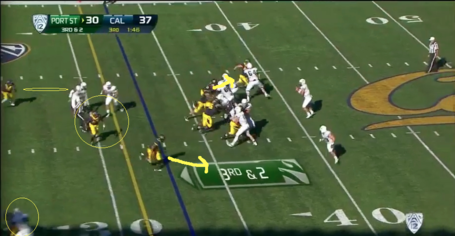 The PSU QB runs out of time and Jefferson puts him in the turf for a big 3rd down stop. Just how you draw it up...right? (As an added bonus, notice the PSU TE extend his arms to throw the umpire out of the way.) 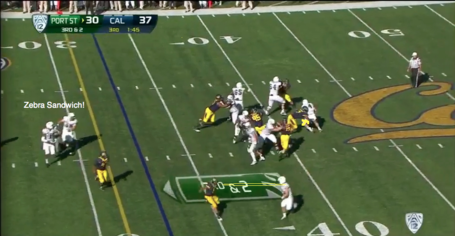 Let's take a look from a different perspective. Here's Jefferson moving up and outside to threaten a blitz off the edge. 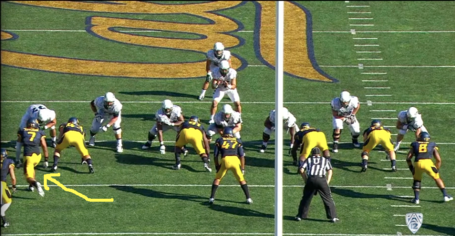 This is a great view of why this blitz worked. Look at how Coleman drew two defenders and drove them both backwards and to the left to clear a lane for Jefferson. 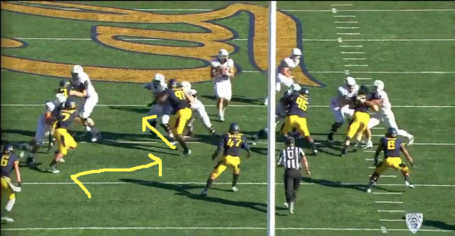 You can see the PSU QB looking off his receiver and going to his outlet back. But Barton is in great position to make a stop behind the line of scrimmage. However, you can also see Nickerson reading the quarterback's eyes and start accelerating outside... 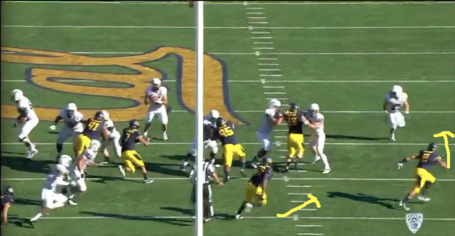 Because Nickerson let himself get drawn out of position, both Viking receivers are wide open underneath. It's a classic case of a young player trying to do too much; he needs to trust that Barton has the running back covered and stick to his assignment in the middle of the field. Meanwhile, Logan is too deep to make a stop short of a first down. Fortunately, the ref gets in the way just enough that Jefferson is able to get to the quarterback before he can get rid of the ball. 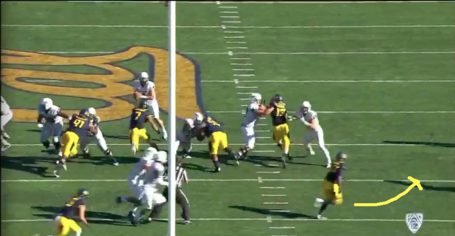 In a microcosm, this play is what we've seen from our defense. Disguised coverage with a good scheme and play call. Good execution by many of the players, but one missed assignment could have led to another 3rd down conversion for the other team. Here's where the loss of a veteran all-conference player like Nick Forbes really hurts.

With so many starters out, an already-young defense seems to be getting younger by the minute. Let's just hope the defensive staff can coach our youngsters up sooner rather than later. Unfortunately, the old adage about there being no substitute for experience is likely going to weigh heavily on our minds as the season continues.

On the flip side, our true frosh quarterback is showing poise and command well beyond his years. Here Cal comes out in their standard 4 WR formation, three receivers to the top with one at the bottom. The tailback is positioned up and to the side of the quarterback as a wing. We pass out of this look 90% of the time, perhaps because it helps the back release into a pattern quicker. PSU is in a nickel package with only 3 down linemen. However, two linebackers have moved up and are threatening blitz. It's an obvious passing down on 3rd and 8. 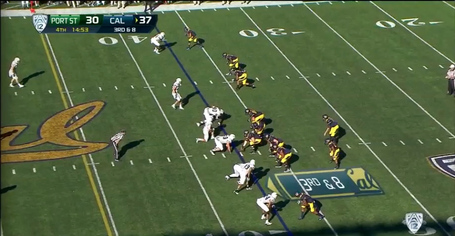 At the snap, the two PSU linebackers drop back into zone. They're only rushing 3 and dropping 8 into what looks to be a Cover 2 zone. Cal is running a variant of one of the classic Air Raid staples, "Y-stick." The two outside receivers are going deep. One inside receiver runs an out, the other runs a short post, and the back releases. 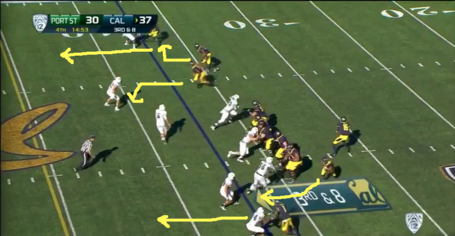 When Goff completes his drop, he doesn't have anywhere to go. Treggs and Harper are tightly covered by the PSU corners with safety help over the top. Rodgers(middle) is the primary read, but has two Viking defenders around him. 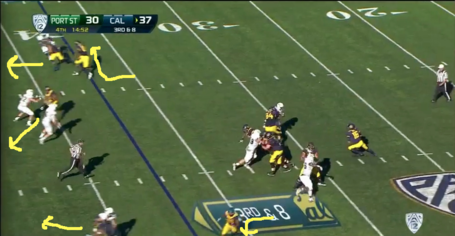 As Powe continues which his out pattern, it draws the deeper PSU linebacker off of Rodgers and leaves him in single coverage. The PSU DE is starting to get around Moore. But Goff doesn't panic. Coolly, he steps up in the pocket. 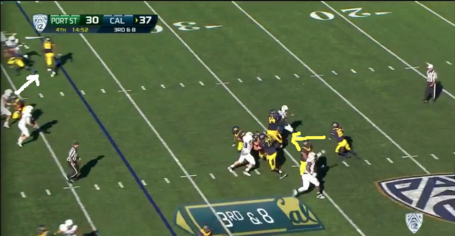 The PSU middle linebacker still thinks he has deep help on Rodgers. Meanwhile, Goff has a clean pocket and steps into his throw... 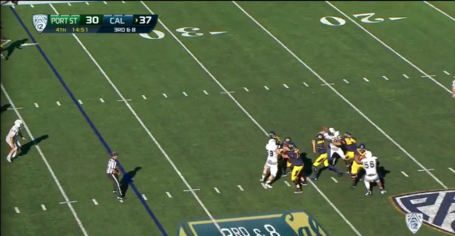 ...which threads the needle just past the PSU defender. Rodgers' speed has gotten him clear of their MLB and into the soft spot of the Cover 2 zone in front of the deep safeties. 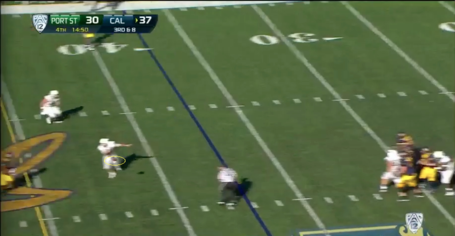 1st down, Bears! It's a simple play, but great execution allowed Cal to move the chains. An accurate throw on third down? Since when is this allowed? 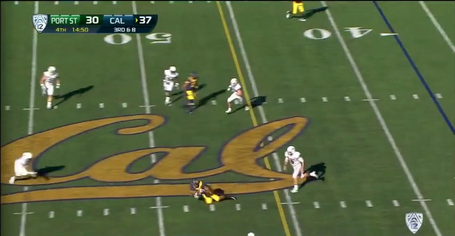 Okay, Cal fans. The next couple of weeks could be a little rough, but let's sit back and enjoy watching this team grow.