We've had a lot of discussion comparing the Tedford team to Dykes's vision, from offensive philosophies to their choice of gameday attire. Why stop there? We've compared the salaries of the assistant coaches of our 2012 team (the last of the Tedford era) to those of 2013 (the birth of the Bear Raid) and the results may surprise you. Or you may have expected it completely.

CGB 1A: Intro to Math

First things first, let's discuss some of the math tools we'll be using in this breakdown. One of the ways we'll be trying to break down this massive amount of data is using the average a.k.a. the mean. To calculate the average, you sum up each piece of data and divide it by the number of data points. It's one way of giving you an idea of a middle-ish value for a data set.

Let's look at an example and analyze the number of beers Oski downs per day. Over a three-day period, he drinks 3, 1, and 5 beers per day through his eye. Their sum is 9 and 9 divided by 3 gives an average of 3 beers per day. If we revisit that example, but consider a particularly raucous party at Haas where he puts down 20 instead of 5, this gives an average of 8. This change shows how the average can be affected by extreme data points that differ significantly from the others. While this can be useful in some cases to give you an idea of the range of magnitude, there are times when you might want an idea of his consumption on a typical day that isn't skewed by such an outlying piece of data.

In these cases, you could use the median. To find the median, you organize your data points in ascending (or descending) order and simply find which value lies in the middle. So, the median is 3 in each of the cases above; it did not change based on one crazy night of drinking. In the case where you have an even number of data points and no number conveniently right in the middle, you simply take the average of the two middle points.

With the recent reveal of the salaries for our two coordinators, we're going to kick things off at home and compare the salaries of our assistants in 2012 under Coach Tedford to those in 2013 under the Dykes system. These salaries were compiled from a number of sources (2012 salaries courtesy of USA Today; 2013 Cal salaries from BearTalk and the Mercury News). 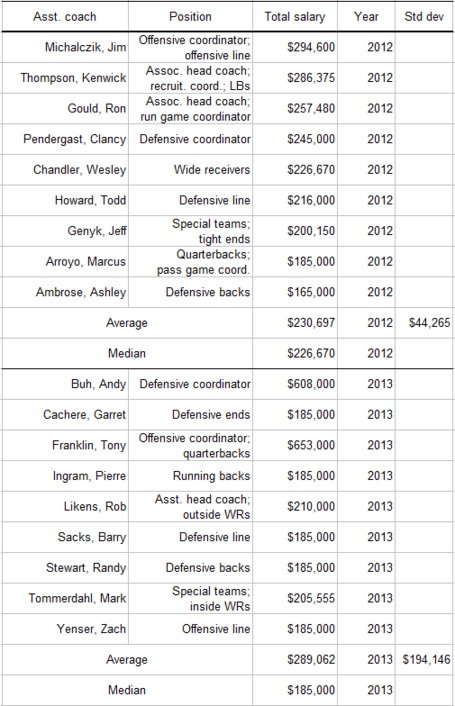 Firstly, I'm gonna dump all this data on you. Behold our numbers! To help make a little more sense of it, we have it broken down a little more into smaller, easier-to-digest tables and with a graph.

We can break down this data to compare salaries by position group. Maybe we can glean some interesting information about what each system values based on differences in pay for position groups?

It's a little difficult to have a completely comprehensive analysis because some coaches have hybrid duties or additional responsibilities. For example, in 2013 we will simply have a Running Backs Coach, Pierre Ingram; in 2012, Ron Gould was the Run Game Coordinator and Associate Head Coach. Due to Gould's additional responsibilities, it would be unfair to directly compare the two, so that comparison was not made. Even for the groups that were compared, there are a few notes. Firstly, the Tedford system used tight ends whereas we have inside receivers in the Bear Raid—different names for the same thing. In 2012, Coach Howard commanded the entire defensive line, but Dykes/Buh prefers having two coaches who each make $185,000. Lastly, our Offensive Coordinator in each year was also responsible for a specific group on the offense. 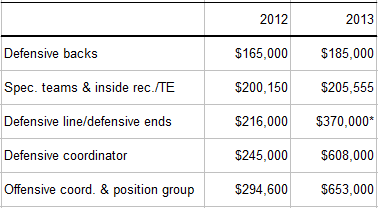 Moving down the list, we see comparable pay for Defensive Backs Coaches and the Special Teams & Inside Receivers/Tight Ends Coaches. They're getting a little more in 2013, but their percentage of the total amount of money we're paying to the coaches is pretty similar. Despite seemingly valuing special teams similarly in 2013, I hope Dykes is putting an emphasis on it so we can see a bit of a better performance in that area.

It's a bit tricky to compare the defensive line situation because we have two coaches in 2013. On one hand, each 2013 DL coach is making less than the Coach Howard did in 2012, which is reasonable as Howard was responsible for both of their position groups. However, it would also be misleading to compare Howard to the sum of their salaries as there is a base salary associated with each coach; their pay was not simply a linear relationship with the number of responsibilities they have. Lastly, we get down to our coordinators, who are earning markedly more in 2013 than their predecessors did in 2012.

Next, we're gonna look at the data overall to find some overall trends from these numbers. 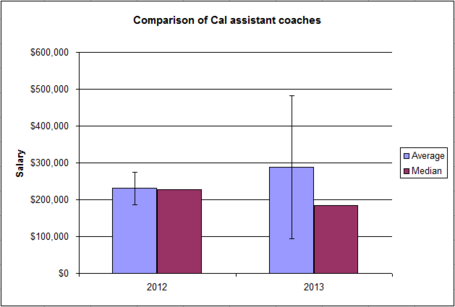 This suggests there is a new philosophy in the Dykes system in which we'll be paying top dollar to hire and retain the top coordinators at the expense of the assistants who are a little lower on the totem pole.

Check back with CGB soon as we'll be providing an exhaustive look at the salaries of EVERY assistant in the Pac-12. Can money buy wins?