The day we have been waiting for is finally here. Let the 2013 season begin! We have reached the last few agonizing hours before the much anticipated dawn of the Sonny Dykes era of California Golden Bear football. Are you excited? Yes. You. Are.

When I first learned that Cal and Northwestern were going to play a two-game series, I was pleased. I saw it as a quality nonconference game against a B1G opponent. And the schools have much in common: among other things, Cal and Northwestern are quality academic institutions in urban centers, have football histories that include some glory but lots of futility, and share a veneration for the great Pappy Waldorf.

Tonight's matchup between the Bears and Wildcats also has a bit of a personal connection to me. As a high school senior back in 19....well, I won't say the year, my choice of college came down to these two fine institutions. Yes, the decision on my college future came down to choosing between the University of California at Berkeley and Northwestern University. I chose to become a Golden Bear instead of a Wildcat and spent four of the greatest years of my life in Berkeley. As far as football fortunes go since I made the choice to bleed blue and gold instead of sip on purple, both programs have had their moments of glory and pain. Northwestern made a Rose Bowl appearance following the 1995 season while we Cal fans still suffer through a Rose Bowl drought. But Cal has notched eight bowl victories since 1990 while Northwestern finally won a bowl game last year (a Gator Bowl win against Mississippi State) for the program's first bowl victory since the Wildcats defeated Cal in the 1949 Rose Bowl. Both schools have also had their share of forgettable seasons during the last quarter century (and, for that matter, since 1949).

This year, at least one of the teams is not expected to have a forgettable season of futility. Northwestern comes into this game ranked 22nd in the preseason AP and USA Today coaches polls. And coming off a ten-win season in 2012, there is understandably a sense of optimism and high expectations in Evanston. On the other hand, Cal is hoping that first-year coach Sonny Dykes can turn the Bears' fortunes around. Cal's 3-9 season in 2012 sounded the death knell for former Coach Jeff Tedford's tenure in Berkeley and Cal is hoping that Dykes and his "Bear Raid" offense can bring not only wins, but also the excitement of an efficient offense back to Strawberry Canyon. 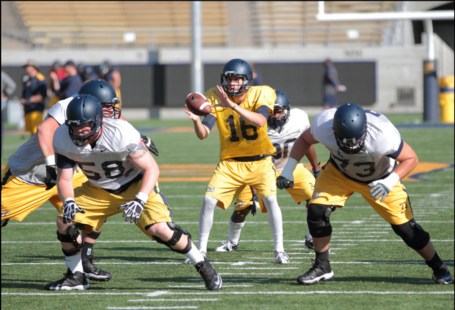 Freshman Jared Goff (16) makes his college debut tonight as Cal's starting quarterback, the first freshman to start at QB for the Bears since Kyle Boller in 1999.

What can we expect on the field in this one? When Cal has the ball, we will obviously be brimming with anticipation to see what the new Bear Raid offense will bring and, specifically, what freshman quarterback Jared Goff will show us in his first college game. Goff is the first true freshman to start at quarterback for Cal since Kyle Boller (nee "Jesus in Cleats") in 1999. What will the freshman have to face with regard to the Northwestern defense? The venerable norcalnick previewed the Wildcat defense and drew some conclusions:

Ah, but there's the rub. There's plenty of reason to doubt that the Bear Raid will be ready to go at full speed from day 1.

Really, the Northwestern defense is the control in this little experiment. They were consistently solid-but-not-spectacular last year, and are overwhelmingly likely be consistently solid-but-not-spectacular this year. No, the variable is the Bear Raid. Is this offense ready to get plays off in under 10 seconds? Is the young offensive line ready to protect the quarterback? And is a certain true freshman ready to make all of his reads, to make the smart pass, to avoid the crushing mistake? If those variables are answered in the affirmative, then the Bears should be ready to score points - enough points to win.

Hopefully that's not too much to ask.

Cal's Bear Raid offense is not the only thing on the field new for Cal. The Bears have a new 4-3 defense under defensive coordinator Andy Buh. Will the transition from the 3-4 to the 4-3 be a smooth one for Cal? Here is where we may be biting some fingernails tonight. Northwestern has a potent offense that has the ability to keep a defense off balance. Berkelium 97 expertly analyzed the Northwestern offense, including the "speed option" that is a staple of the Wildcats' attack:

The principle is similar to the zone read. The QB will read the unblocked defender (either a DE or an outside linebacker) on the edge. If he crashes down for the QB, the QB pitches to the RB. If the defender moves towards the RB, the QB keeps the ball and scampers around the edge.

Northwestern also uses some traditional, downhill power running. Like the Tedford offense of old, this relies typically on a pulling guard (the guard leaves his position and moves over to plow through the hole where the ball carrier will run) as a lead blocker. They may also use an H-back as an extra lead blocker. While the Wildcats don't often use their power running, they will rely on it during short-yardage and goal-line situations.

In case that's not enough for you, the Wildcats also run a triple option (you see what I mean when I describe this offense as "multiple"?). The triple option is a combination of the zone read and speed option . . . .

After reading that, how do you feel about tonight's game? Will Cal pull of the mild shocker or will the 'Cats show us why they are the 22nd ranked team in the country?

This is your pregame open thread. Get out your pregame jitters here. Watch here and in the comments for links to the quarter threads as the game goes on.