Salary study: How much do Pac-12 offensive assistants make?

This is it! Let's take one last look into the checkbooks of the Pac-12 assistants by counting the quarters for the offensive assistants.

Share All sharing options for: Salary study: How much do Pac-12 offensive assistants make?

To understand some of the mathematical tools we'll be using, it would help to have a working knowledge of the average, median, and standard deviation (see this post); normalization (see post); and percentile (the most recent post).

Briefly, the average is calculated by summing every data point and dividing by the number of data points. The median is the value that lies in the middle when you plot the data in ascending/descending order. Note that the average does not necessarily equal the median for some sets of data. The standard deviation tells you how much your data points deviate. A large standard deviation means there was a wide spread of values. Normalization is a method to adjust the scale of the numbers by dividing every data point by the average or the median. A normalized salary of 1.0 means you are making the exact same as the average or median. A value of 2.0 means you've doubled it and any values less than 1.0 mean you are making less than the average or median pay. And percentile tells you what percentage of the population is beneath you. The 99th percentile means you are the 1% while the 10th percentile means only 10% performed less favorably than you.

Keep in mind that because each school has nine assistants, one-ninth of 100% is 11.1%; if every assistant were paid equally, this is what he'd earn. We'll see the Running Backs and Wide Receivers Coaches are making, on average, a bit under this perfectly-even figure. The average Offensive Line Coach is making a little bit more than these two--suggesting the importance of winning a game in the trenches--but are still under that 11%. This allows the Offensive Coordinators to earn more than 11%, which makes sense since they are the offensive overlords.

This analysis will be just like we did for the defensive coaches in which we compared coaches with similar responsibilities, but now with the other side of the ball. The following tables have collected the total salary; the overall percentile; that assistant's salary normalized to the average and median salary of all assistants; and that assistant's percentage of his school's total amount paid to all its assistants.

Holy smokes, based on our experience with him, I don't know if anyone would expect Steve Marshall to be the top-paid Offensive Line Coach in the Pac-12. With all other OL Coaches coming in around the 30th–45th percentile, Marshall clobbers that by ranking at the 78th percentile! Similar to the case of Ron Gould, OL Coach Marshall made more than our joint OC/OL Coach Michalczik in pure dollars and cents, but with a smaller share of his school's pay (12.8 vs. 14.2%, respectively).

We immediately see a drop in the percentile that RB Coaches earn compared to the DCs. Interestingly, Oregon's Gary Campbell, listed as just a RB Coach, made more than our Coach Ron Gould did ($257,480) despite Gould's additional duties as an Associate Head Coach and Run Game Coordinator. However, when we look at what each coach made as a fraction of their school's overall assistant pay, the numbers make a little more sense. Campbell made 8.6% of the total Oregon assistant salary while Gould made 12.4%. The discrepancy in their salaries has everything to do with Oregon paying their assistants an obscene amount of money. 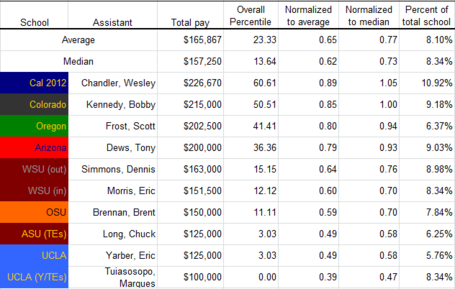 First, a few notes about the validity of this particular analysis. WSU and UCLA both have two WR Coaches apiece, so that makes things a little tricky. It's not entirely fair to compare any one of them to a single, dedicated WR coach, but you can't exactly sum the salary because I'm sure there's a base salary that each individual earns; if either WSU or UCLA were to simplify with just one WR Coach, I bet he would make less than the sum. ASU's WR Coach is also a Pass Game Coordinator, so I decided against throwing him in here. On the other hand, I included ASU's Tight End Coach because UCLA's Coach Tuiasosopo coaches TEs.

Holy inconsistency! 2012 Cal paid the most for any Wide Receiver Coach with Wes Chandler coming in at the 61st percentile, possibly due to his NFL background. On the other end of the spectrum, we've got ASU and UCLA, whose poor WR Coaches are at the very bottom of the overall rank. This wide range in pay can be seen in the average percentile, which is 23.33 with a standard deviation of 21.9. The standard deviation is basically the same as the data point itself, meaning the average is not strongly representative of the dataset overall. 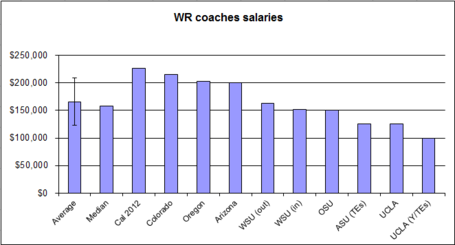 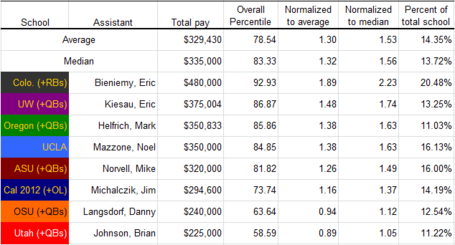 I'm calling these guys the OC+ because, almost exclusively, OCs in the Pac-12 seem to shoulder an additional responsibility by coaching a specific position group, unlike most DCs in the conference. The one exception is UCLA's Noel Mazzone, but his salary is pretty competitive, so I kept him in despite being a slacker who just coordinates offensively.

Despite being regarded as a high-scoring conference, we see a drop overall in what the OCs are making compared to their defensive counterparts, where the average and median pay were 20.03% and 22.98% of their school's share. This is especially surprising when you consider most of these OCs have additional responsibilities over a position group. This may be because the HCs of most of these schools are renowned for their offensive minds; consequently, they may have decided to hire a more impressive DC to compensate while helping their OC with running the offense. 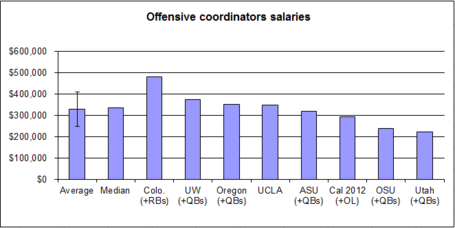 Still reading? That concludes a dense and lengthy look into the purses of the Pac-12 assistant coaches. What do you guys think about the salaries of the offensive assistant coaches in the high-scoring Pac-12 conference? Are they fair? Is there anyone who deserves more than the meager money they're currently making?