When Jared Goff starts the Bears' season opener against Northwestern on August 31, it will be the first time in 14 years that a true freshman started at quarterback for Cal. In 1999, it was Kyle Boller who accomplished that feat. We take a look back at the game that launched the "Jesus in Cleats" era at Cal.

Share All sharing options for: A look back at the last time a true freshman started at quarterback for Cal

The Cal football team's most burning question going into fall training camp was answered Friday when Coach Sonny Dykes announced that Jared Goff would be the Bears' starting quarterback. When Goff takes the field on August 31 at Memorial Stadium against Northwestern, it will mark the first time since 1999 that a true freshman started a game at quarterback for Cal. 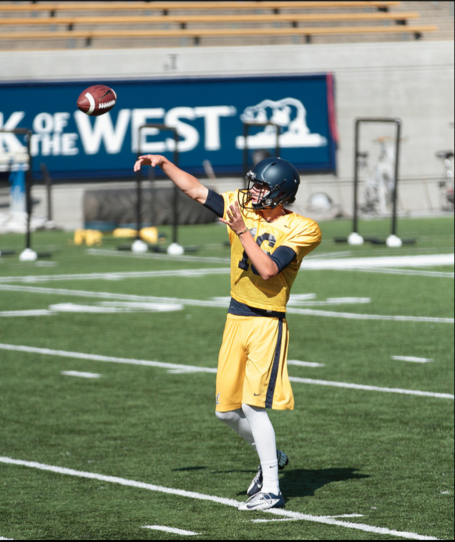 That freshman quarterback was Kyle Boller, the headliner of then-Coach Tom Holmoe's 1999 recruiting class. Probably Cal's most heralded recruit since Tony Gonzalez in the early 1990s or Russell White in the late 1980s, the Daily Californian dubbed Boller "Jesus in Cleats" before he ever played a down in a Bear uniform. As a true freshman in the fall of 1999, Boller found himself in a battle with sophomore Sam Clemons for the starting quarterback job. Clemons got the starting nod in training camp and started Cal's first two games of the 1999 season -- a lackluster 21-7 home win over Rutgers and a 45-0 loss at Nebraska. Boller played in each of those first two games, completing 8 of 15 passes for 89 yards and a touchdown in the win over Rutgers before going 2 of 10 for 21 yards in one half of action against Nebraska. During the week following the Nebraska loss, Holmoe anointed Boller the starter for Cal's Pac-10 opener against Arizona State.

"Our offense needs a spark and we're hopeful Kyle can provide that boost," said Holmoe at the time. "He's looked more and more comfortable during the last two weeks as he's gotten more reps with the first unit."

Not that anyone's first collegiate start at quarterback would be easy, but ASU certainly could not be deemed a breather on Cal's schedule in 1999. The Sun Devils began the season nationally ranked (and would ultimately be a bowl team in 1999) and were coming into Berkeley in a bad mood after a shocking 35-7 home loss to New Mexico State the previous week. And ASU's head coach at the time, Bruce Snyder, had pretty much owned Cal since leaving the Bears after the 1991 season, going 6-1 against his former team in the schools' previous seven meetings.

A crowd of 44,500 (considered a good Cal crowd for a non-Big Game/USC/UCLA game back in the day) came to Memorial Stadium on September 25, 1999 to witness Boller's first collegiate start. And it was not disappointing. Cal fell behind 7-0 after ASU's first possession of the game, but the Bears battled back to tie the score at 14 by halftime. With just over a minute remaining in the first half, Boller found running back Marcus Fields for a 16-yard touchdown pass to pull the Bears even.

ASU would eventually take a 23-14 lead with 12:22 left in the fourth quarter after a 27-yard touchdown run by Delvon Flowers. Even though Cal's Tully Banta-Cain (a freshman in 1999) blocked the extra point following Flowers' touchdown, the nine-point lead looked like it might be too much for Boller and Cal to overcome. Cal's offense had struggled on the ground (only 50 yards rushing as a team for the game) and were outgained 475-263 in total yards on the afternoon. Could the Bears rally behind the arm of their freshman quarterback?

Yes. They. Could. Boller drove the Bears 75 yards in eight plays following the ASU touchdown, the key play being a 34-yard gain on a swing pass to freshman running back Joe Igber. Boller capped the drive with a 12-yard touchdown toss to Mike Ainsworth. Jeremy Hershey's extra point brought Cal to within 23-21.

Boller wasn't done. After the Cal defense forced an ASU punt, 1999 Pac-10 defensive player of the year Deltha O'Neal (remember him?) set up the Bears in ASU territory with a long punt return. Boller could not lead the offense into the end zone, however, and Cal settled for a 25-yard field goal by Hershey. Still, the field goal gave Cal a 24-23 lead with 7 minutes left in the game.

Cal hung on for victory, thanks to Boller -- but not for any reason having to do with quarterbacking. With Cal attempting to run out the clock with just over a minute remaining, Igber fumbled inside the ASU 40-yard line. ASU linebacker Eric Fields picked up the loose ball and ran for what Cal fans feared would be an unlikely and heartbreaking touchdown. But Boller managed to catch up with Fields to make a game-saving tackle at midfield. Cal's defense would hold and the Bears walked away with a one-point victory. In addition to getting the win, Boller finished his starting debut with a respectable statistical line: 17 of 32, 213 yards, 2 TD and 1 INT.

Boller's first collegiate start, however, does not show up as a victory in the Cal record books. In 2002, the NCAA nailed the Cal football program with sanctions in the wake of an academic fraud scandal involving Ainsworth and fellow wide receiver Ronnie Davenport. Cal was slapped with a one-year bowl ban, scholarship reductions, and forfeiture of wins in which Ainsworth and Davenport participated. One of those wins was the 1999 victory over Arizona State.

Boller started eight straight games for the Bears during his freshman season before missing the Big Game with an injury suffered in a 24-19 home loss to Oregon. Boller went 3-5 as a starter in 1999 (or 0-8 if you indulge the NCAA and its forfeiture sanctions) and did not post impressive statistics that year. Boller infamously completed only 38.6 percent of his passes in 1999 and threw more interceptions (15) than touchdown passes (9). Still, the writing was on the wall that Boller would be the future signal caller for the Bears in the years to come, a reality that led Clemons to transfer to Division 1-AA Western Illinois after the season.

Boller never quite lived up to the promise of the "Jesus in Cleats" moniker stamped on him by the Daily Cal. He struggled through his sophomore and junior seasons in 2000 and 2001, and even lost (briefly) his starting job to redshirt freshman Reggie Robertson during Cal's dismal 1-10 season that closed the Holmoe Era in 2001. To his credit, however, Boller flourished in his senior season in 2002 under first-year coach Jeff Tedford. Boller passed for 2,815 yards, completed 53.4 percent of his passes, and threw 28 touchdown passes against only 10 interceptions. Boller also led Cal to a Big Game victory in 2002, breaking Cal's seven game losing streak to its hated rivals from Palo Alto. His 2002 season enabled him to become a first-round draft choice of the Baltimore Ravens in the 2003 NFL Draft, which led to an eight-year NFL career with the Ravens, St. Louis Rams, and Oakland Raiders.

With all the optimism surrounding Goff's performance in training camp and the excitement of the Bear Raid offense, it is an understatement to say that Cal fans are hoping for more out of the Goff experience than what Cal saw during Boller's career. At the very least, Cal fans hope for the same result in Goff's first collegiate start as in Boller's -- a win. (But a win that we don't have to forfeit later!)