We've compared Cal across time, scrutinized all 99 assistant coaches individually, then broke them into their teams. How else can we look at this data? DEFENSE, BEARS, DEFENSE!

To understand some of the mathematical tools we'll be using, it would help to have a working knowledge of the average, median, and standard deviation (see this post) and normalization (see previous post).

Briefly, the average is calculated by summing every data point and dividing by the number of data points. The median is the value that lies in the middle when you plot the data in ascending/descending order. Note that the average does not necessarily equal the median for some sets of data. The standard deviation tells you how much your data points deviate. A large standard deviation means there was a wide spread of values. Lastly, normalization is a method to adjust the scale of the numbers by dividing every data point by the average or the median. A normalized salary of 1.0 means you are making the exact same as the average or median. A value of 2.0 means you've doubled it and any values less than 1.0 mean you are making less than the average or median pay.

Today's post will involve one more tool: percentile. You may recall this from taking standardized tests like the SAT; essentially, the percentile tells you what percentage of the population you've bested. If you're in the 99th percentile, then yay you! 99% of people are worse than you because you are the 1%! Conversely, if you're in the 10th percentile, you aren't doing so hot. I elected to include percentile in this post (and omit it in the previous) because I did not want to overload the previous article with too much data; however, since this post will be broken into smaller chunks for analysis, I think percentile will be useful because, at a quick glance, we can get an idea of how much each group gets paid on a known scale from 0–100.

For this breakdown, we're going to try to compare coaches with the same job title across schools. This breakdown won't be inclusive of all schools at every position because some coaches will have additional duties, thus earning extra pay. The following tables have collected the total salary; the overall percentile; that assistant's salary normalized to the average and median salary of all assistants; and that assistant's percentage of his school's total amount paid to all its assistants. Keep in mind that because each school has nine assistants, one-ninth of 100% is 11.1%; if every assistant were paid equally, this is what he'd earn. I've also calculated the average and median for each group. There will also be a few graphs because graphs are pretty and I like pretty things. 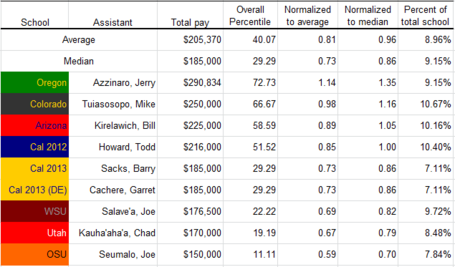 Let's note Tosh Lupoi's salary of $450,004 (15.9%) as their Defensive Run Game Coordinator/Defensive Line Coach. He's basically doubling the salary the highest-paid DL Coach on this list, Colorado's Mike Tuiasosopo, and earning a greater percentage of his school's pool than any other DL Coach! All that defensive run coordinating really bumps up Tosh's pay.

With the pure DL Coaches, we hit a similar hiccup by having two DL coaches in the 2013 Cal system. You can't compare either individual coach to one coach manning the entire line, but you can't compare by summing salaries as there's a base salary for each individual. Even ignoring that, we still see a pretty wide range of salaries here, from OSU's Joe Seumalo ranked in the 11th percentile to Tuiasosopo in the 67th percentile. 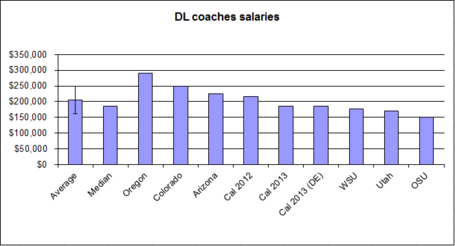 These guys are called DB Coaches, Cornerbacks Coaches, or Secondary Coaches, but they all look the same to me. In a recurring theme, Oregon's John Neal dwarfs all the other coaches with his salary and he earns a respectable amount of Oregon's pool of cash, with Arizona's David Lockwood at a close second when analyzing percentage. All of the DB Coaches, even Oregon's, come in and less than the perfect one-ninth, which is a little surprising given the prevalence of spread-offense teams in the conference. 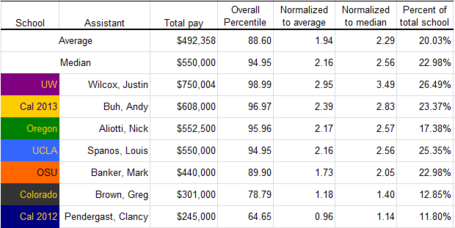 And now, the man in charge. Looking at each DC's percent share, we see every single one is making more than the perfectly-equal 11.1%, suggesting their importance. Based on the percentile, Defensive Coordinators seem to be a top priority at the Pac-12 schools with data available, ranking in the 89th and 95th percentile (average and median, respectively)! With that in mind, there are a few schools that strayed pretty far from this; Colorado and OSU are slightly under this, but 2012 Cal is significantly under this standard! As I discussed in my previous piece, this may have more to do with Cal using a significant amount of their funds on assistants with seniority from long ties to the university rather than a relative newcomer like Pendergast.

The results were relatively inconclusive. Nearly all of the defensive coordinators ranked at a high percentile with the outlyingest outlier being 2012's Clancy Pendergast. Most of the DCs came earned nearly double that magic 11.1% of the share of his schools' funds; Pendergast and Colorado's Greg Brown came in with percentages comparable to 11.1%.

The majority of the defensive backs coaches earned under 8% of their schools' money pool, which strikes me as a little unusual. With all the great Pac-12 quarterbacks, I'd want well-coached DBs to counteract their passing abilities. I found it rather difficult to draw a meaningful conclusion from the defensive line coaches; there were coaches coming in at that low 7%, some in the middle around 8 or 9%, and some right under that 11.1%.

Check back soon for the last in this series, taking a look at the offensive assistants!