A look at the salaries of every assistant of a public school in the Pac-12. Money can be exchanged for goods and services, but how about wins? Who's maximizing wins while spending the least money?

Share All sharing options for: Salary study: A breakdown of 99 Pac-12 assistant coaches

CGB 1B: Math on Math

A prerequisite to this course is CGB 1A, which discusses some concepts to analyze data like average, median, and standard deviation. If you'd like a refresher, please revisit your materials from that class.

Briefly, the average is calculated by summing every data point and dividing by the number of data points. The median is the value that lies in the middle when you plot the data in ascending/descending order. Note that the average does not necessarily equal the median for some sets of data. The standard deviation tells you how much your data points deviate. A large standard deviation means there was a wide spread of values.

In this lesson, we'll be taking a look at the salary of every 2012 Pac-12 assistant I could find, as well as our 2013 coaches. We'll see which schools are paying the big bucks to their staff (Oregon and UW) and which schools are paying their staff the least per win (Oregon State and Oregon, again!). We'll also take a closer look at some of the differences in Cal's salary allocation in 2012 vs. 2013 and how that compares to other schools in the conference. Bring a hard hat, cuz we're going on a trip down into the Excel mines.

Checking the wallets of every Pac-12 assistant

Today, we'll be delving into the salaries of the Pac-12 assistants. These salaries (2012 assistants, 2013 Cal assistants, and 2013 Cal coordinators) were obtained through a public records request, meaning the salaries of USC and Stanfurd have not been released because they are private schools. Also, it's worth noting that each school has nine assistant coaches.

#1–10
Let's start up top with the top ten. There are three schools with multiple assistants in this subset: Oregon, UW (including everyone's favorite Cal alumnus), and 2013 Cal. Conversely, Arizona, ASU, 2012 Cal, and WSU do not have any assistants in this pay range. Five of the top six (and six of the top ten) are defensive coordinators, so perhaps the Pac-12 shouldn't be thought of as a defense-less conference of quarterbacks anymore. Although this is a mix of the conference's 2012 and Cal's 2013 salaries, it's worth noting that we have the highest paid offensive coordinator and second-highest-paid defensive coordinator. Hopefully this will translate into results on the field. 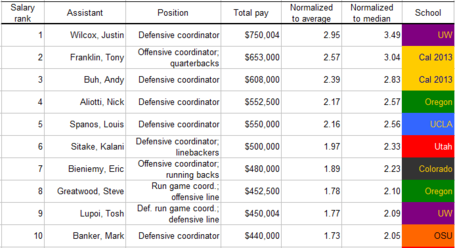 #11–20
Moving on to 11 to 20, we see a lot of green and yellow--Oregon has six of the top 20 assistants, which is perhaps related to their recent run of success. UW has three of the top 13, all of whom have ties to Cal. No other school has more than two assistants in the top 20. We see the highest paid assistant coaches at Arizona, WSU, and ASU pop up in this crop. 2012 Cal is the only school that hasn't had an assistant show up yet; as we learned last time, our 2012 team of assistant coaches were all similarly paid, so we can expect to see our top-paid guys in a more modest range. For all the talk of the Rich Rod and Mike Leach offenses, we see their highest paid assistant coaches are their defensive coordinators, continuing the trend we saw previously. Perhaps this is because those head coaches trust in themselves to be the masters of their offense, rather than shelling out the big bucks for an offensive coordinator. In beautiful Berkeley, we have Dykes as the Bear Raid mastermind, but OC Tony Franklin is still our top-paid assistant. We also see the highest-paid special teams coach, Oregon's Tom Osborne, come in as the 12th highest paid assistant coach. 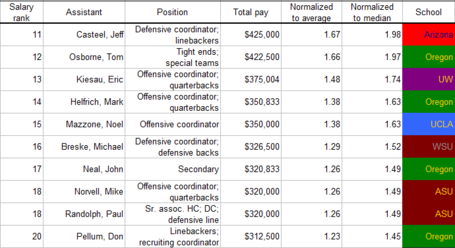 #21–40
We see five of 2012 Cal's nine assistant coaches appear in the following clump, with offensive coordinator Jim Michalczik being our big earner in 2012. Clancy Pendergast, our 2012 DC, is the fourth highest-paid assistant coach for 2012 Cal! This completely breaks the trend we've been seeing at other schools. Pendergast came with an impressive NFL background, so I'd doubt this is indicative of a lack of emphasis on defense or an evaluation of his abilities, despite the number of blowouts we suffered last year. I'd guess this has more to do with seniority as the 2012 Cal assistants ahead of him were Michalczik, Kenwick Thompson, and Ron Gould, three men with long-standing ties to our Golden Bears, resulting in them becoming coordinators and Thompson and Gould being associate head coaches. We see maligned ex-Cal coach Steve Marshall out-earn Michalczik despite the latter's additional responsibilities as offensive coordinator; this is pretty shocking to me. I'd also like to point out Gould, who came in at 32 on this list, is earning roughly the calculated average salary. Maybe this is my Cal bias, but this seems like a crime to me! 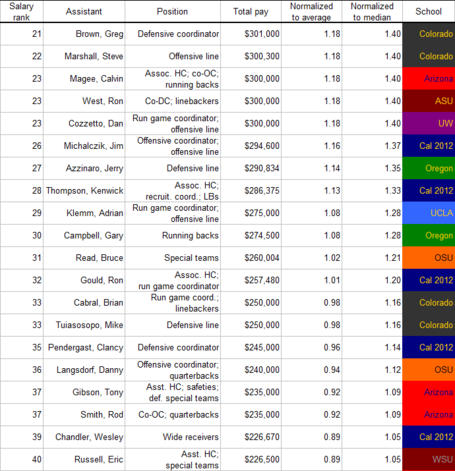 Holy 41s! There are six assistant coaches who earn $225,000. Obviously, this number is important and critical to football success, which is why we see so many coaches earn this. And clearly, it's related to winning football games because... I don't know. I'm just easily amused by this pattern. We see 2012 Cal's Todd Howard rank at #48, not far behind the other 2012 Cal assistants. He and four other coaches who each earn ~$215,000 earned the overall median salary of all assistants. As discussed in the previous salary breakdown, I would associate this kind of difference between average and median with very large values on the high end of the spectrum. The rich keep getting richer! Coming in at 58, we have Oregon's Scott Frost, making them the first school to have all nine assistants appear on this list. Eight of their assistants were in the top 30 and Frost finishes up at 58. This trend of high Oregon salary may be related to their success and/or Nike. After having two of the top three highest salaries, it's taken us this long to get to the third 2013 Cal assistant, Assistant Head Coach, Outside Wide Receivers Coach, and Chipotle-aficionado Rob Likens at #54. As discussed last time, the majority of the total wages going to 2013 Cal assistant coaches are to Franklin and Buh. After those two, all of our assistants are making (relatively) modest amounts. 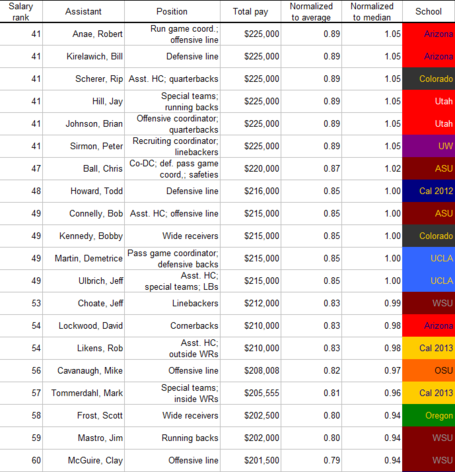 #61–80
This list kicks off with our 2012 special teams coach, Jeff Genyk. We also see a huge cluster of 2013 Cal assistants who each earn $185,000. And, with this grouping, that wraps up the 2013 Cal assistant salaries. After Oregon completed their assistants by assistant #58, we were the next to finish as #70. I'm a little surprised to see all of these guys make the same amount as our 2012 Passing Game Coordinator, Marcus Arroyo as I'd imagine coordinators make a little extra. 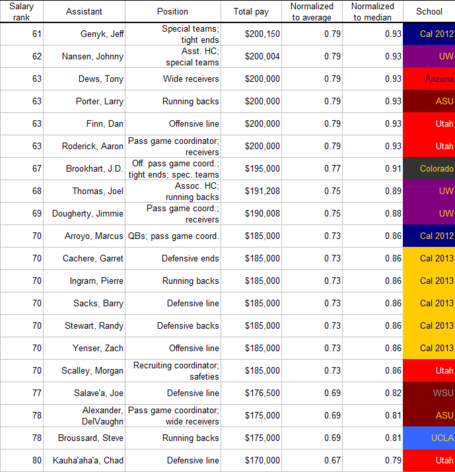 #81–99
At 82 is the last 2012 Cal assistant, Ashley Ambrose, thus wrapping up the 2012 Cal assistants, making our 2012 Cal team the third to complete all assistants (and the second school to do so in 2012). The other schools finish with Arizona at 85; WSU at 87; a three-way tie at 88 with OSU, Utah, and UW; Colorado at 95; ASU at 96; and UCLA is last at number 99. UCLA has the greatest range in assistant salary, spanning from the 5th-highest-paid to the very last at 99. More than half of OSU's assistants fall in this final bracket, proving they can win without paying the big bucks. 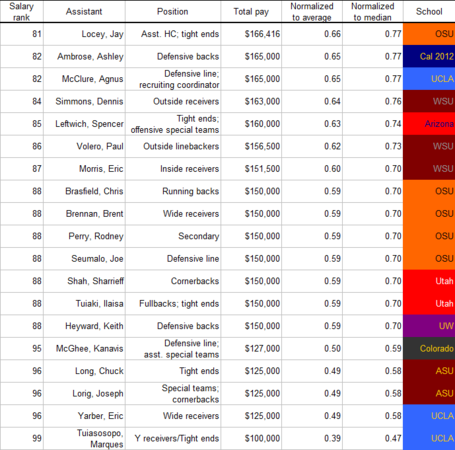 Next, let's take a look at the schools overall, as well as their average and median salaries. 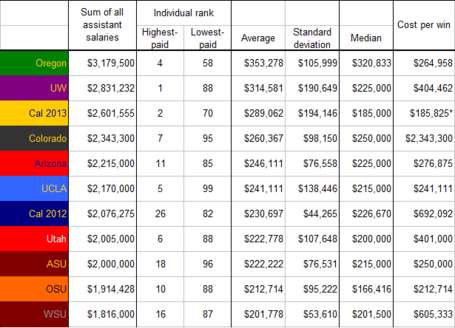 As previously discussed, Oregon pays their assistants the most and is the only school paying more than $3 million, although UW isn't that far behind. There's been a lot of discussion recently questioning if we're paying our assistants enough, especially in the wake of Tosh leaving. If you omit our 2013 salaries, this leaves our group of 2012 assistants as being paid sixth out of the 10 public schools in the conference. If USC and the Furd are ahead of us, that would leave us at eighth overall, putting us in the final third for our conference.

I wonder if this is a consequence of Coach Tedford having stayed with us for so long. As shown above, we have a number of assistants with lengthy tenures (and Gould was actually at Cal for longer than Tedford was), resulting in them earning fancy titles and additional pay. While other schools like UW, UCLA, and 2013 Cal can pay top dollar for a few key assistants and pay the others more modestly, 2012 Cal didn't place a single assistant coach in the top 25; none of those assistants were making elite-level money. All of the money allocated for our assistants was somewhat evenly distributed, as shown by having the smallest standard deviation of all schools in this study.

Just for curiosity, let's take a look at how much each school their assistants per win, shown in the last column of this table. Needless to say, the asterisk shows I've gone ahead and penciled in the 14 wins for next year with the Bear Raid. Obviously! Coming in last is Colorado for their one-win season. But, let's not mock them as our 2012 squad was next in line, spending nearly $700,000 on assistants per win. Discounting the remarkable season that will be 2013 Cal, Arizona and Utah come up right in the middle despite practically having polar opposites of seasons. The Wildcats experienced a rebirth with the spread offense of new coach RichRod while Utah failed to make a bowl under eight-year head coach Kyle Wittingham. Unsurprisingly, OSU has the most value, maximizing wins while ranking ninth (out of ten 2012 schools in this study) in money spent on assistants. Riley continues to bring wins to the Beavers without five-star recruits and without spending exorbitant amounts on their assistants. It can't just be hip-hip-hoorays and the promise of In-N-Out, right?

This last exercise is a little silly because there's much more that goes into the responsibilities of these assistants than purely wins, especially at schools in their rebuilding phases. While we all want Dykes's coaching team to make the Bears a perennial bowl team again, it's also critical for them to instill an appreciation for academics and to aid in the maturation and character development of our Golden Bears.

Oregon comes out of this analysis as the clear winner--able to afford the greatest salary pool for their assistants while spending the third-least per win. Colorado on the other hand...they spent nearly ten times as much per win.

To give you an idea of Oregon's spending, they have two of the top-eight coaches and six of the top 20; looking at all the lowest-earning assistants per school, Oregon's makes the most. We also see an emphasis on defensive as the majority of the top-earners are defensive coordinators.

From a Golden Bear perspective, perhaps the most interesting finding from these beautifully color-coordinated graphs is a stark contrast between the 2012 and 2013 trends. In 2012, the coaching staff was filled with many assistants unofficially becoming senior staff; the money was forced to be split among too many hands with not a single coach landing in the top 25. 2013 is a completely different story. Most of these men are first-time coaches at Cal (and OL Coach Yenser is a first-time coach period), so they're making the equivalent of entry-level salaries. Consequently, all that extra money is going straight into the pockets of our coordinators.

Still hungry for more chat about cash and change? We've got another analysis comparing assistants across schools based on their positional duties. If you love charts and tables, you'll go crazy for this one!