KNBR's Damon Bruce chatted with Coach Sonny Dykes about the usual stuff (quarterback competition... the Bear Raid offense...) and being best buds with the other head coaches at the number-one public institute in the damn world.

Share All sharing options for: Cal Football: Sonny Dykes talks to KNBR on the coaching family

Bruce starts things off by asking about the dichotomy of being hyped as an offensive mastermind with the mystery of working at a less prominent program like La Tech.

I think that's the exciting thing and it's exciting for us, just because we obviously are pretty comfortable in our system, seeing how our players fit and making all the moving pieces come together. That's what's fun about coaching--you go out, you practice, you throw a bunch of stuff on the wall, you see what sticks, and you figure out your strengths and weaknesses, and figure out a way to win.

There are a lot of different ways to win in college football. Year 2 at Louisiana Tech when I was there, we just kind of got by on offense, but we had the best defense in the league. We were really good on special teams, so we didn't turn the ball over on offense. We finished the year with a seven-game winning streak.

This past year, we had to do it a little differently. We lost all our senior players; we had a lot of guys coming back on offense, so we had to outscore everybody. That's what makes coaching fun--figuring out here's what we have covered, so let's try to make the best football team we can out of all those ingredients.

Regarded as such a famed offensive master-guru, Dykes was asked by Bruce about the Bear Raid and the offensive renaissance in college football.

We're definitely a spread offense. We spread it out, go fast, and play with tempo and all that. But the thing that we want to do is be as good as we can up front on the offensive and defensive lines. The funny thing about football is it's changed--it's evolved, it's different--but the team that wins the line of scrimmage is still the team that wins on Saturday and there's a lot of different ways to do it.

You can do it like Stanfurd does where you put a bunch of guys in there and kind of play football in a phone booth and get after it and play power football or you can spread the field and still play power football, just try to create match-ups and make the defense cover the entire length and width of the field.

The fun thing about college football is not everyone does the same thing. That's what makes it so much different than the NFL, where everyone kind of runs the same offense. In college football, you might have an extreme like a Washington State that's gonna throw the ball on every down or you're gonna have an extreme like a Navy that's gonna run the ball on every down. It's fun to see those two teams' contrast in styles.

With the recent media blitz, especially in the Bay Area, the focus turned to Dykes's relationship with his newfound arch-rival, David Shaw of the lowly Stanfurd.

David and I have spent some time together. We did the tour--we went over to ESPN on Tuesday and did a bunch of stuff Pac-12–related in Connecticut on Wednesday, flew to LA and had about a six-hour flight and had the chance to visit on that flight. It was the first time to meet Ron. He's a great guy and seems like a great football coach.

The great thing about this area is there's really good football around here. If you look at the success Stanfurd had last year, obviously going to the Rose Bowl and winning, San Jose and the great season they had, and the 49ers. There's a lot of good football in the Bay Area.

Coach, you've gotta stop saying nice things about them! What about the converse and his relationship with the man he replaced, Coach Tedford?

When I got the job, I gave Jeff a phone call and intended on doing it some more. Jeff obviously knows about Cal, had a really successful 11-year run here, and built this program to a program that was recognized nationally. We wouldn't have this great facility here at Memorial Stadium if Jeff didn't have the success he had.

I think people realized how special the program at Cal can be because he made it such a good program. I just spoke to him recently a little bit. Just wanted to let him know we're gonna treat his players with great respect and he was great. Jeff was really open to talking and, as I said, I plan on giving him a call before we get started here and talking to him some more. He's been here before, he's had success here, and I know he wants to see Cal do well. 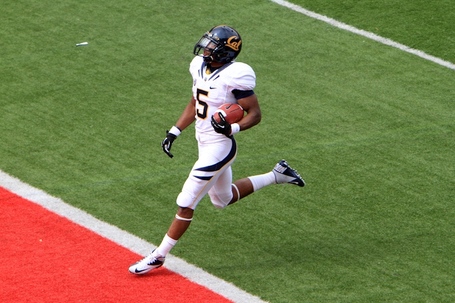 Some of Tedford's players, like Brendan Bigelow, will play a huge role in getting the Bear Raid going.

It's great to hear Dykes cares about the players and recognizes the magnitude of the commitment he's undertaken as our new coach. But let's not get ahead of ourselves--we have to ask the same ole questions about the quarterback competition.

I would love to put that behind us and let us move on to something else. The good thing about it is we have three capable candidates, three guys who will give us a chance to win. We came out of the spring believing that. The guys have worked really hard since then, organizing practices and running them themselves and doing that all summer.

I would expect that once we start practice a week from today, the guys are gonna be different. Some of them will have taken a step forward, some a step backwards or not improved, so we'll line 'em up and evaluate them again and see where we are. Hopefully there will be a clear-cut starter. That's what we all want.

We all want one guy to win the job and invest the amount of reps we have to invest in him to get him ready to play and give us a chance to win against Northwestern on August 31st. There are a lot of things that remain to be seen. I'm not sure how it's going to play out yet, but we're starting at a good point.

It's no secret that Cal is the greatest institution on the face of this planet, so Bruce asks about the pros and (the very few) cons here and how the other head coaches here, including football super-fan Mike Montgomery, have helped Dykes so far.

We've had some interesting conversations about the things that make Cal unique and some of the positives and some of the things that you have to navigate a little bit. Mike's had a ton of experience at different levels. The funny thing about coaching is it's all about building relationships, communicating, and organizing. Mike's fantastic at all those things, so he's definitely a resource for me. I'm excited about getting to know him better and picking his brain from time to time.

That's the great thing about the coaches here. We've got a special group of coaches. Jack Clark has played at Cal and is a great rugby coach--one of the best who's ever been around--and has had tremendous success. I can pick his brain as well from time to time. We've got a lot of great coaches here and guys who obviously want to see our football program do well.