Can Jared Goff become the starting quarterback all while adjusting to the Cal lifestyle?

Thanks to TheScientist019 for transcribing!

Lindsay Brauner (LB): Hi, it's Lindsay Brauner here with Jared Goff. Jared, you are one of the youngest guys on the roster right now and you're in one of the biggest positions of responsibility. How does that feel?

Jared Goff (JG): They told us [on] Day One not to take it as freshman, sophomore, junior, senior; just be out here and be a football player and that's what I try to do everyday.

LB: Jared, you were a spring enrollee for UC Berkeley, you decided to leave MC (Marin Catholic) early. How does that feel for you?

JG: It's been fun transitioning to that college atmosphere and lifestyle. Going to classes two or three times a day has been nice, but the homework load's different. You have papers spread out, so it's different.

LB: What's been the best part about transitioning from high school to college?

LB: What is your favorite class you're in right now?

JG: I'd probably have to say psychology.

LB: How do you see the team coming together even after just a couple weeks of practice?

JG: We're definitely molding together really nicely right now. everyone gets along for the most part; we all like each other and it's fun when we get to compete out here against each other.

LB: When you get the ball snapped to you in the pocket, what's the first thing you look for?

JG: Depending on the play, probably look for the open receiver immediately and if he's open, throw it.

LB: What's the key to maintaining that kind of panoramic vision on the field?

LB: Do you have any friends or family up in the stands today?

JG: Yeah, I think my mom and dad were here and a few family and friends were here. They're over there waiting for me now to go talk to them when it's all over.

LB: All right, well, get out of here, go have fun with them. We'll see you soon. Thanks, Jared!

JG: Thank you very much.

LB: Everyone's calling you McLovin. Is it a daily thing or kind of just a today thing that you are called McLovin?

JG: It's daily. I'd probably say Bryce [Treggs] made it up, but it's daily.

LB: If people want the ball will they yell "McLovin?"

Mysterious off-screen interrupter (MOSI): You might as well pause it.

LB: We paused it for all of you. 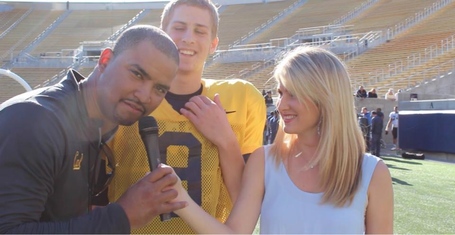 Pierre Ingram (PI): You might as well pause it because right now we're walking behind his interview so it doesn't matter

LB: Wait, Coach Ingram, I have a question for you, can you come here for a second?