Today we take a look at some highlights from the first part of Pac-12 Media Day: Pac-12 North press conferences and other morning observations.

This past Friday I had the pleasure of attending another Pac-12 Media Day. The event has transformed remarkably under Larry Scott. An event once held in dingy hotels near LAX now takes place in venues such as Fox Studios, Universal Studios, and even the Rose Bowl. Friday's festivities took place at Sony Studios.

In addition to improvements in the venue, Media Day has featured better and better freebies each year. We once received a pen, a flash drive, and some media guides. Now we get all sorts of creative goodies. Look at this year's haul. 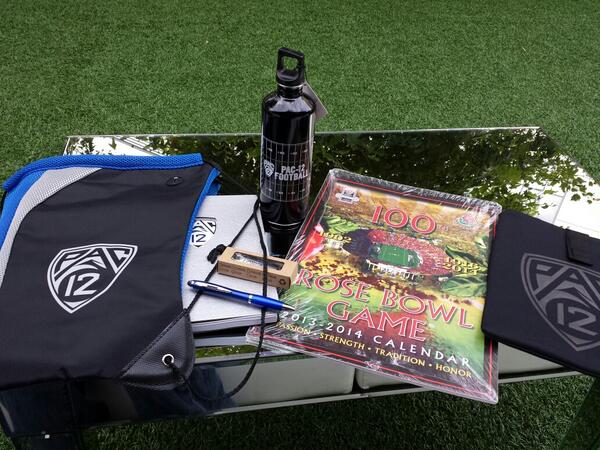 I received a Pac-12 backpack/bag, a Pac-12 pen, a Pac-12 Notebook, a Pac-12 aluminum water bottle, a Pac-12 flash drive, and a Pac-12 tablet sleeve. I don't even have a tablet and I'm still excited about that sleeve. Best of all is this Rose Bowl calendar. It's a 14-month calendar featuring covers from Rose Bowl programs, both historic and modern. Here's a look at all the calendar's images.

The 1959 Cal-Iowa Rose Bowl is featured in the top right above. Each calendar page has a picture from the game and a description. This is, by far, my favorite item I have received at any media day.

The sound stage for the press conferences was not scheduled to open until 8am. As I had arrived around 7:15am, I had plenty of time to kill. I grabbed a cup of coffee and wandered around the lot. The Pac-12 had an endless army of assistant who helped coordinate with the event. They wore highlighter Oregon yellow shirts, so you could probably spot them from a low-orbit satellite. Several of them were talking about which coaches they were going to assist throughout the day. For reasons mysterious to me, they expressed jealousy when talking about the ones working with Lane Kiffin. It's abundantly clear that Lane Kiffin does not enjoy these media events, so I can't imagine he's much fun to be around at Media Day.

The decorations at the event were unique. While the infamous turf couches did not make another appearance, the couches did have some nice pillows on them. 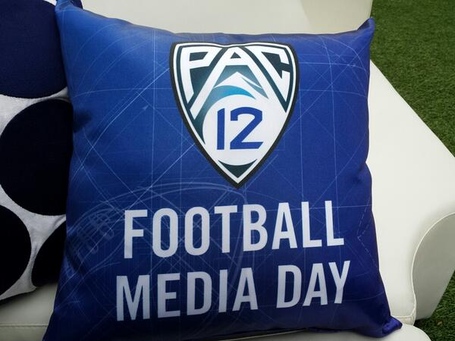 Later on during the lunch period, several of the media day assistants rounded up all these pillows. They seemed intent on making sure no one left with an extra "souvenir" or two.

Shortly before heading inside the sound stage, I gathered several media guides. Colorado's was underwhelming. 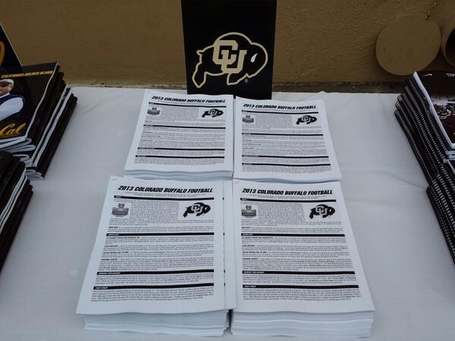 I don't want to poke too much fun because Cal's looked just like that a few years ago. 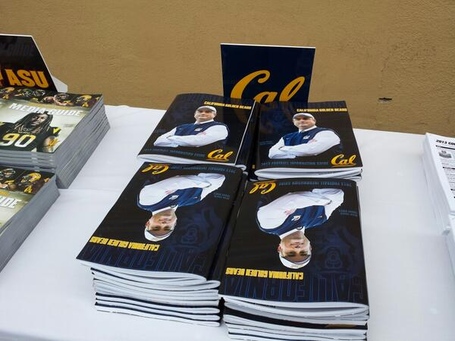 Once the main sound stage opened up, I headed inside to grab a seat. I'm glad I was there early, as it was standing room only by the time the press conferences began.

The decorations inside were certainly different this year. This year's decorations had a sci-fi look: plenty of blue and white and an abundance of computer-generated images with surface maps. 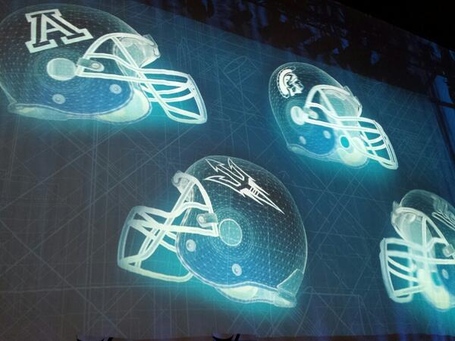 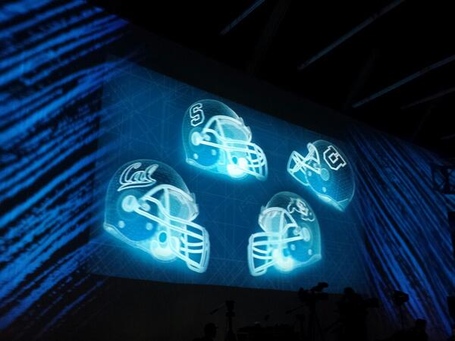 I bet Stanfurd fans were upset with that blue helmet. Well they would be if they existed...

At the foot of the stage was a series of helmets. Unfortunately they had last year's model of the Cal helmet. 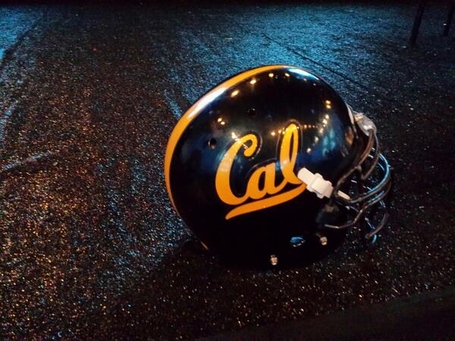 From my seat I could not figure out whose helmet this is. It's matte black with a white stripe and another reddish stripe. 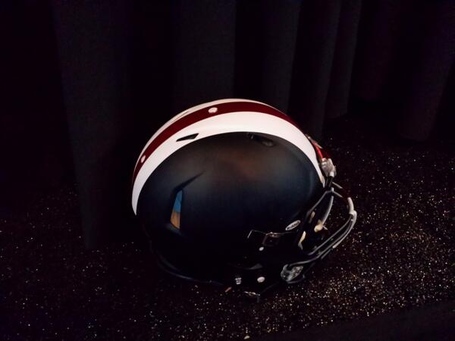 It wasn't a Stanford helmet; their white helmet was elsewhere on the stage. Eventually I figured out that it was an Oregon State helmet. Nothing about that helmet reminds me of Oregon State (except the tiny OSU decal on the front).

Larry Scott began the press conference by highlighting the conference's accomplishments before discussing the Pac-12 Network. It quickly became clear that the Pac-12 Networks will not partner with DirecTV this season. He had some choice words for Pac-12 fans with DirecTV subscriptions: "I urge our fans that are intent on not missing their team's games this fall to drop DirecTV and switch to one of the many providers that have it." He said all coaches and ADs with DirecTV have also dropped the service provider in favor of one who offers the Pac-12 Networks.

He spoke about the recent developments to enhance player safety. Scott claims the conference is in a great position to be an innovator in terms of player safety due the expertise on the topic among Pac-12 schools. While he was short on specifics (and recommended we look at a press release on the matter), he said the new guidelines "provide greater limitations on contact during football practice and provide additional recovery periods for our student athletes." Throughout the press conferences the coaches said these guidelines will have little impact on their weekly practice routines, as these are practices already adopted by coaches in the Pac-12 and beyond. The Pac-12 will continue to study head trauma and is in the process of putting RFID chips in helmets and chest pads to monitor the impact of collisions.

As usual, Larry Scott was not available for questions. This means another year goes by without his thoughts on the horrific state of Pac-12 officiating. If you look at the teams with the most penalties per game over the past couple years, 5 of the top 10 teams belonged to the Pac-12 in 2012 and 5 of the top 12 teams were in the Pac-12 in 2011. These are not team-specific problems either, as 9 different teams fill out those 10 spots. This is no coincidence. But I digress...

Finishing last in the North Division last year, the Cougars were first on the stage. Mike Leach gave the shortest opening statement in the history of Pac-12 Media Day: "Alright, any questions?"

Sonny Dykes was the first of the conference's new coaches to take the stage. His opening comment emphasized how excited he is to be at Cal and to be at Pac-12 Media Day. He made many points Cal fans have heard before.

Everyone's favorite coach from the Pacific Northwest was next.

Mike Riley and the Beavers were supposed to be next, but they were running late. Instead we got our first chance to hear from Oregon's new coach, Mark Helfrich. I came away with a solid first impression of Helfrich. Chip Kelly never really cared for the media and seemed annoyed at previous media days. Helfrich was much warmer and more engaging. Perhaps he's what we need to mend our tarnished relationship with our feathered friends at CGB North. That and getting rid of those horrific uniforms--that would really help. Elder statesman Mike Riley was next on the stage. This is his 13th year at the helm of Oregon State. David Shaw of the Lobsterbacks was up next. I would have more to say about his press conferences, but I was hypnotized by how shiny his head is. Look at it. Just look at it.