Ahead of Friday's official Pac-12 Media Ballot, we release the results of our mock media ballot. Oregon tops the Pac-12 North while UCLA narrowly edges USC for the Pac-12 South title. The North is heavily favored in the Championship Game again.

Ahead of Friday's unveiling of the official Pac-12 media ballot, we conducted a mock media ballot last week. Our 300+ respondents predicted the final standings for each of the conference's divisions. Respondents also predicted the winner of the Pac-12 Championship Game. Without further ado, let's take a look at the results.

Teams are listed in rank-order, with the percentage indicating the number of first-place votes they received. 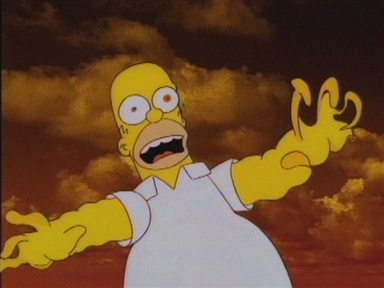 I can understand the votes for the Ducks and the Lobsterbacks, but we received plenty of first-place votes for the Bears. Usually our predictions are pretty good about keeping homerism in check, but not this time! Predictably, Oregon State, Washington, and Washington State received very few first-place votes. Barring a series of improbable events, those three (four, if you include Cal) have little chance of winning the division. 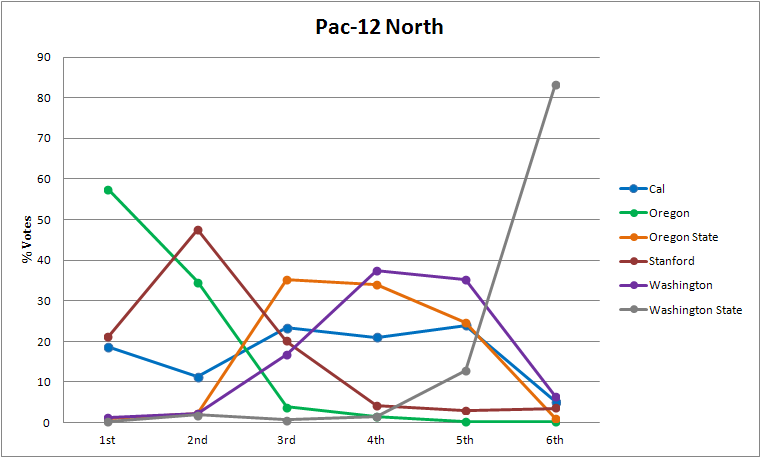 If not for all these Cal homers, we would have a fairly coherent set of results. Oregon is clearly ahead of Stanfurd, who sits ahead of Oregon State. The Beavers edge Washington, who is ahead of the clear favorite to finish last, Washington State. Cal, meanwhile, is all over the place and receives several votes at every position but 6th.

How did things shake out in the Pac-12 South?

Arizona, Utah, and Colorado round out the bottom three. Arizona has to find a new quarterback to complement (almost) 2000-yard rusher Kadeem Carey. Utah has struggled since joining the conference and Colorado is not equipped to make a run at a division title.

Below we have the distribution of votes. 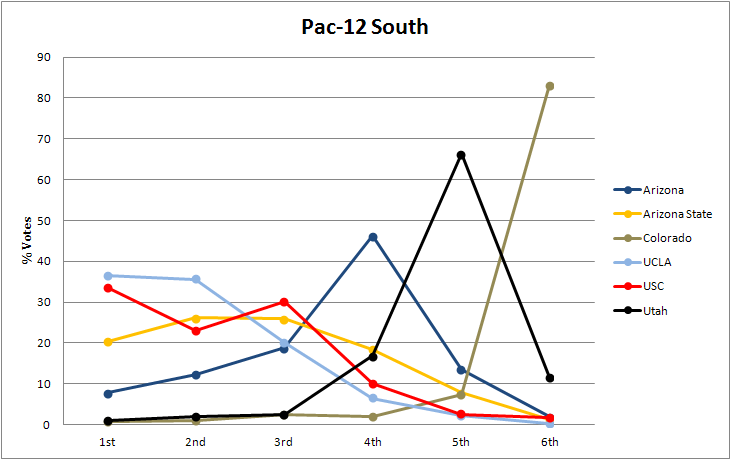 UCLA narrowly edges ASU and USC. Very little separates USC and ASU, although USC has a slightly higher average rank than ASU. Arizona, Utah, and Colorado fit very nicely into 4th, 5th, and 6th, respectively, as demonstrated by peaks in their predictions at those positions.

Again, it's tough to disagree with these predictions. Personally, I'd put ASU at 1st, which moves UCLA to 2nd, and USC to 3rd.

Finally, we have the results of the predicted Pac-12 Champion.

Nice job, homers. The Pac-12 North is the heavy favorite over the Pac-12 South in this year's Championship Game. Oregon leads the way, followed by a tie between Cal and Stanford. The three Pac-12 South front-runners combine for about 9% of the votes. After that is an interesting mix of votes. Colorado even managed to receive a few. The poor Cougs didn't receive a single vote. Their humble, reasonable fans would never let homerism color their predictions. Good job, Coug fans.

Thanks for participating! The official media ballot will be released Friday morning.