Are they best friends or is it all a show for these frenemies? Is there a mancrush at Memorial? Our own Lindsay Brauner investigates!

Our thanks to Leland Wong for transcribing the interview!

LB: How is it hanging out on the sidelines with all this new, exciting coaching stuff happening? What's that like? Just how depressed are you?

TB: I really don't like it, of course. I really love playing football, so having to sit on the sideline and watch is terrible. I don't really like it.

JG: I agree. I want to be out on the field to show my talents. We've got people in the stands now since our practice is open, so I want to show people what I can do. It's kind of weak

LB: How much do you guys participate in the drills? Can you guys do any of the things out there?

TB: We basically do everything that doesn't involve hitting. We strike the sleds and stuff like that, but when it comes to full-on contact, we can't do that.

LB: When are you thinking about getting back out there?

TB: I'll be back for fall camp; I'm out for the rest of spring ball. I just want to have time to really rest up because I have a recurring injury, so I'm just gonna give it the right amount of time so I can come back and never have this injury again.

JG: I'm coming back in the fall, too. They have me doing the drills in spring ball right now, but they don't want me to do anything crazy and hurt myself. They just want me rested for fall camp. 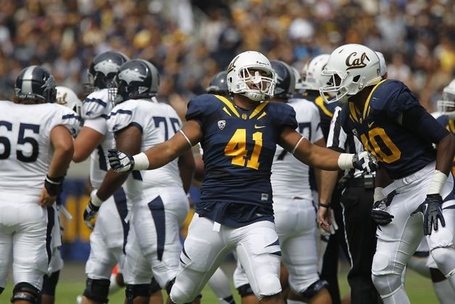 Todd Barr is ready to be unleashed. via ww2.hdnux.com

JG: We're not friends at all, actually.

JG: It's only on camera.

LB: Are there ever any fistfights on the field with you two?

TB: Not usually because we're on the same side of the ball, but between offense and defense, there are some fistfights.

LB: Not between the two of you, even though you dislike each other so much?

JG: I'm not gonna put my boy out there like that; he can get his butt whooped sometimes, but--

JG: Sometimes it can get a little intense.

LB: You guys really came here together? One of you made the decision and the other did?

TB: He called me and said, "I committed [to Cal], so are we gonna do this there?" Like, five minutes later, as soon as he committed, I committed.

LB: Did you guys play together for a long time before coming here?

TB: No, actually, he went to [Junipero] Serra [High School]; I went to Lakewood [High School]. They're about 15 minutes away. We just became kind of close at some of the camps and official visits.

LB: Todd, Jason, thanks for joining me and I hope you guys work out all the problems between the two of you.

TB: Thank you, I appreciate it. We'll try.

LB: Do you guys wanna use that microphone for anything musical? Please?

LB: What were you just doing now?

TB: Get our mixtape.

TB: We're gonna drop a mixtape; you can get it there.

TB: A tease is what we call it.

JG: The Tease! That's what it's called!

TB: For the mixtape that's gonna drop at the end of spring ball.

LB: Darn, you got my hopes up. Would you guys be rapping about football?

JG: See, they've gotta get the mixtape to find out. We can't tell them nothing. We can't leak that.

Will you be buying The Tease by Barr and Gibson?