KNBR's Damon Bruce declared a Brendan Bigelow Media Day when he talked to the star running back about his recovery and thoughts looking forward to the 2013 season.

Let it be known that July 17 is Brendan Bigelow Media Day! At least, according to Damon Bruce of KNBR when he chatted with Bigelow about the future of the Cal program, the current status of Bigelow's health, and the history of great Cal running backs.

The conversation began by looking back to the 2012 season and Bigelow's amazing stats--but low number of carries--and how the new coaching staff intends to get him involved in the new Bear Raid offense.

I take everything one day at a time. There are no hard feelings with my old coaches--I love them still. You have to move on and start fresh, so it's a new start for myself and I'm getting better at the things I need to get better at.

For all of us, when a new coach comes in, we wonder how we're supposed to deal with it and the loss of our old coach. How are we supposed to bounce back? My early impressions were ‘Can he turn the program around? Can he do the things necessary to get our program up and running? Can we win games?'

I like [the new offense] a lot. My old high school actually ran the same offense. We called certain formations differently, but it's the same style of spread offense. It's exactly what I did in high school, so I'm familiar with it.

Of course, Bigelow's performance is reliant on the status of his knees and his ability to rebound from that injury.

I'm back out there on the field now. I'm starting to run and cut and stuff, start wearing my brace. I take it one day at a time though. I'm getting treatment and stuff like that, but I'm up and running now. I feel good about that. I'm happy about that.

I haven't had contact yet, but I think as soon as I get hit, I'll bounce back and smile because I'm back. Hopefully I can get that confidence when that does happen, but I'm looking forward to the season and getting back in the pads.

If Bigeow's recovery is successful, there's no doubt the fans will look to him to continue the trend of first-class running backs at Cal thanks to his superstar speed and uncanny balance. Bruce asked Bigelow how much contact the youngster has with these elite predecessors.

Throughout the entire interview, Bigelow continued to reiterate his philosophy of taking life "one day at a time." He isn't preoccupied with what the future could hold--setting school records, becoming another great Cal RB, or an NFL contract--he's focused on what he needs to do today to be his best.

Bruce then asked about some more broad topics related to Cal football, like the new stadium and the shiny new uniforms. Bigs picked us purely based on our unis, right?

The facilities are great. The stadium is historical; it's been around for so long and so many great athletes have come out of it. The alumni have been building it up and all the money that was actually put into the stadium. It's a great feeling to have the facilities that everybody donated and gave back to Cal for. It's a great feeling to be a part of it and to bring my athletic ability to the program.

I like [the new uniforms], too--a lot. I like all of them. My favorite one is the white ones--the white uniforms. I like the yellow ones too.

And don't worry guys--Bigelow reiterated that the polar bear helmets are gone. 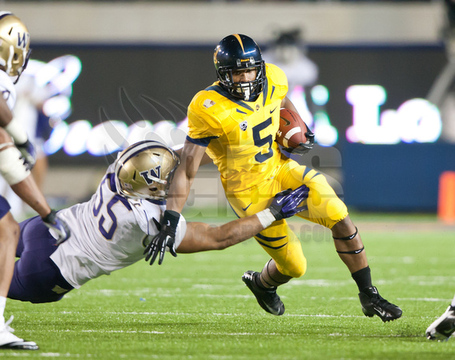 Of course, it wouldn't be a 2013-preseason interview without asking about the quarterback battle. Even in an interview with a running back. Bruce seems to have ruled Hinder out of the competition, asking Bigelow for his thoughts on Zach Kline and Jared Goff.

They're both explosive. They both can throw. They both can run. They have everything a quarterback needs to have that starting job. I like both of them. It comes down to who's gonna have the most heart when we're in a situation that needs his help to win the game. Who's gonna sacrifice. They're both great quarterbacks, so best of luck to the best of them.

And that concluded the interview. Bruce went into his closing speech, thanking Bigelow for his appearance, when Bigelow cut him off. He had one more thought on his mind that he wanted to let all of Bear Territory understand without question.

I love that Bigelow felt so passionately that he needed to let this be known and end the interview on this note.
Fans, what do you think about Bigelow's interview? Is he making the future look a little bit rosier?