Pre-packaged combination plays are one of the hottest new trends in both professional and college football. We've all heard about check downs, hot reads, and audibles. As we've seen, this requires the offense to read the pre-snap defense correctly. This can all get blown up rather quickly if the quarterback, receivers, and Oline aren't on the same page, or if the defense was clever about disguising their coverages. But what if the offense has two or three different options, but runs the play the same way each time?

And what if the reads are simplified to focus on one defender or one area so that the quarterback just has to pick the better of two options?

As we mentioned in our overview of the Bear Raid(Part One, Part Two), this is very similar in concept to the now infamous zone-read. By forcing one defender to be in two places, the offense should always have a numerical advantage given good execution. Instead of having the option of two different runners, a packaged play has a choice between a run or a pass, or even two different passes. Oregon has been using this concept for years. Hydrotech broke it down for us very nicely here.

Per Chris Brown at SmartFootball.com, the three main concepts are:

1) Running play with the option of a quick smoke screen

If the defense doesn't cover the wide receiver tightly enough, the quarterback pulls the ball back and throws it to him. Otherwise, it's a run.

2) Quick pass with the option of a delayed draw

3) Quick pass with the option of a backside screen

Grantland has a great write-up here showing how Aaron Rodgers used the threat of a quick stick route to set up a backside screen for a big gain.

Let's take a look at the packaged play concept in action. 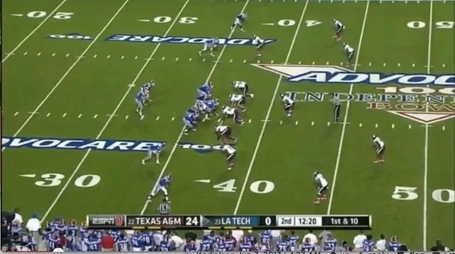 At the snap, the QB offers the ball to the tailback. However, his eyes are downfield. He notices that there is only one LB in the box. The play side safety is in a backpedal instead of charging up in run support. So he completes the handoff. 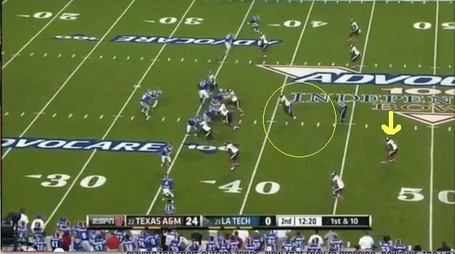 Both the play side and back side wide receivers stop in their tracks and turn to face the quarterback. This forces their assigned defenders to stay outside. Meanwhile, the right tackle has used a nice kick out block on the defensive end while he right guard and center have used a combo block to move the defense's left tackle out of the way. This creates a large running lane... 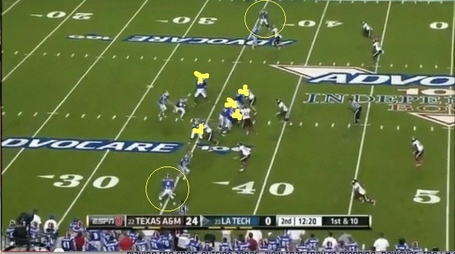 The LaTech tailback bursts through the line. Fortunately for TAMU, their OLB was in zone coverage in the slot. Instead of staying with the receiver, he makes the correct read and moves back inside to meet the ball. Their safety is too deep to make any difference. 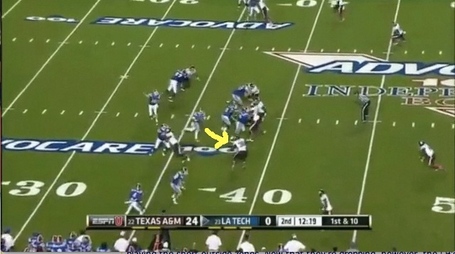 The TAMU LB makes the stop, but not before the LaTech back runs him over for a nice 5-yard gain. 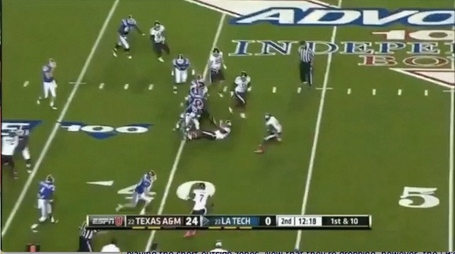 Now it's 2nd down. Same drive. LaTech comes out in the same formation. TAMU decides to switch things up and goes Cover 3 while moving another defender into the box. 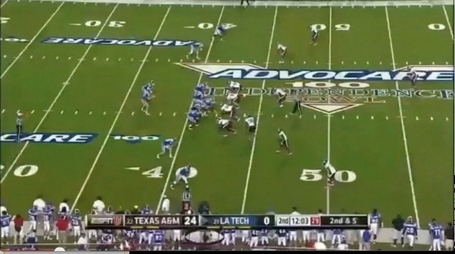 Dykes and Franklin are unfazed. They run the _exact_ same play. Once again, the QB offers the ball to the tailback. But this time, he reads two defenders in the box and no safety help deep. Also, the OLB covering the slot receiver has already started to cheat inside. So he pulls the ball back. Just as in the previous play, both wide receivers stop and turn to the quarterback. The backside smoke screen isn't a good option because there's safety help. But on the play side, it's solo coverage... 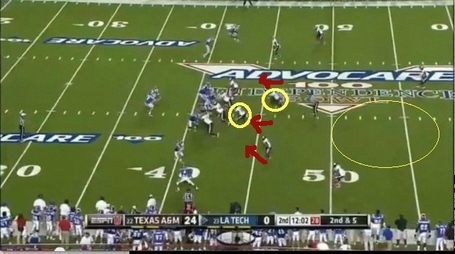 The quarterback delivers the ball to the play side wide receiver on the smoke screen. Notice that the Oline is blocking exactly as if this were another running play. Many defenders key on the offensive line to help them read run/pass. In this case, it's pulled the TAMU linebackers inside. The OLB covering the slot simply can't cover both the inside handoff and the outside screen pass at the same time. 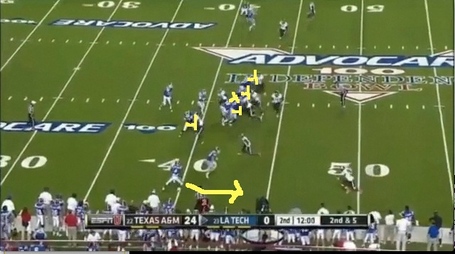 The LaTech WR only has one man to beat and he has his slot receiver ahead of him as a blocker. The TAMU OLB who stopped the previous run finds himself with a poor angle to get to the ball and takes himself out of the play. 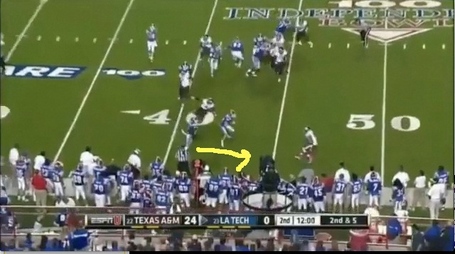 The slot WR blocks the CB and frees the outside WR for a big gain down the sidelines. Advantage: Dykes/Franklln. 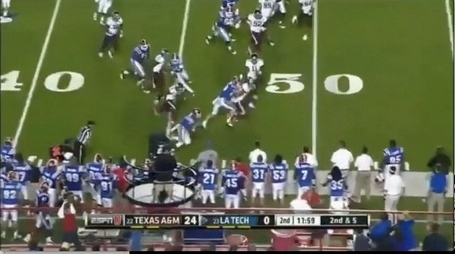 Keep in mind that these two plays were run consecutively with very little time in between for the defense to get their bearings. Each play only took a few seconds of game time to execute. When you take a packaged play and combine it with a breakneck pace, the defense has to adjust on the fly to cover two different threats from a play that looks exactly the same. That's no easy task.

As another wrinkle, this same play can also be run out of un-balanced trips formation with 3WR on the play side and 1WR on the backside. TAMU is in their standard Cover 2. 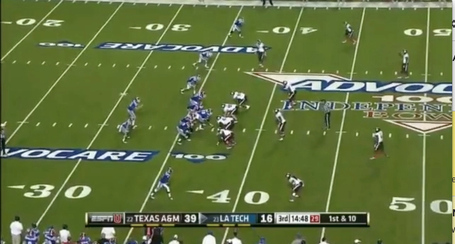 At the snap, the QB offers the ball to the tailback who looks like he's running towards the strong side(top). Both outside WRs stop and turn back to the ball. The entire Oline starts run-blocking towards the strong-side (top) of the formation. This action draws both the backside OLB and Safety towards the middle of the field. The backside DB stops to read the play, but he's still given the WR and 8 yard cushion. 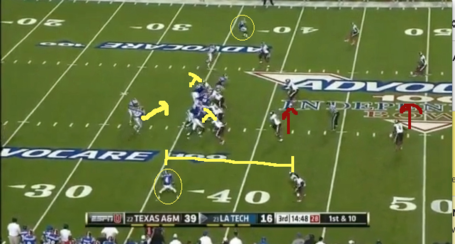 Having made both the pre-snap read of a large cushion on his single-covered backside receiver and perhaps a quick-read that the backside OLB/Safety have been drawn out of position, the QB pulls the ball back and delivers it to his backside receiver. The DB has a lot of ground to make up in a hurry... 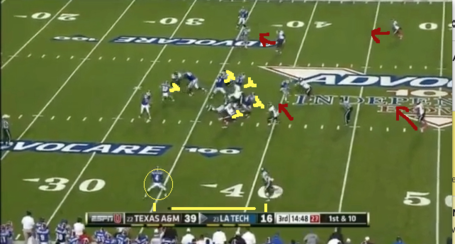 Although the DB closes quickly, his momentum makes it tough to break down and check the WR. Meanwhile, the rest of the defense is still out of position. 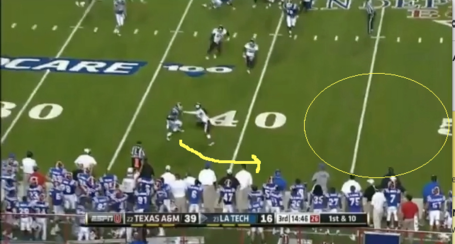 The DB gets jukes out of his shoes and the LaTech WR is off to the races for a big gain. 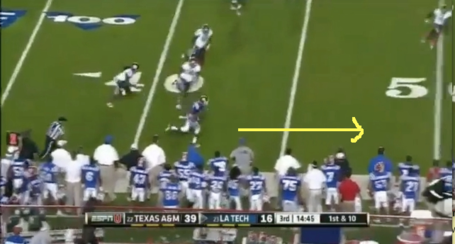 Can you imagine Treggs or Harper doing this all season long? I'm okay with that.

Excited about the new offense, Cal fans? Dynamic and innovative, yet also simple to learn and execute. It almost sounds like I'm pumping...Sonny Delight. Let's hope that the on-the-field product blows away our expectations.